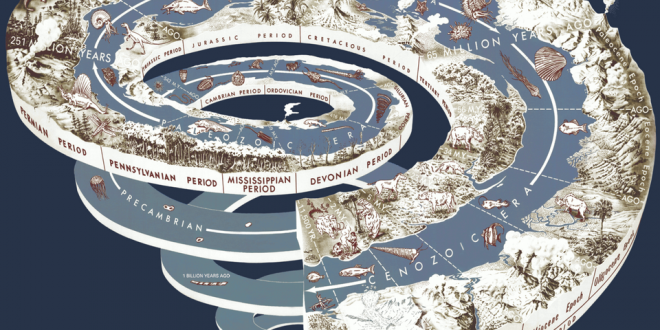 Graphical representation of Earth's history as a spiral. Source: https://en.wikipedia.org/wiki/Geologic_time_scale

Ecology is a branch of biology that studies and explains the biodiversity of existing ecosystems. Ecological processes have evolutionary implications as well. They interact with genetic diversity via adaptation, microevolution and speciation. Biodiversity expresses the richness of life within a specific bio-bubble. Which has a very substantial history and a matter of attraction for many ecologists as it gives us a visualization about the evolution and its timeline as well.

A Time Travel to The Glorious Past

The prehistoric itself refers to the time before records were kept written, thus there goes around many rumors and datas without any strong ground as proofs. However, ecologists agreed to divide Prehistoric period into: era, period and epoch. The Paleontological Record is given on the basis of:


The time scale is divided into three large periods of time-  Cenozoic era, Mesozoic era and the Paleozoic era. Each of these historical periods possess distinct characteristics and fossil records.

Two of the most significant episodes in the history of animal existence are wedged between the Paleozoic and the Mesozoic. Multicelled animals saw a dramatic “explosion” in diversity at the start, with nearly all living animal phyla appearing within a few million years. On the other side of the Paleozoic, the world’s largest mass extinction wiped off almost 90% of all marine animal species. The Paleozoic Era is divided in to seven period: the Cambrian, the Ordovician, the Silurian, the Devonian, the Mississippian, the Pennsylvanian, the Permian.

Cambrian period: Marine organisms with mineralized skeletons first appear in the Cambrian’s shallow oceans, however for the first ten million years or so, only “little shelly fossils” (tiny shells, spines, and scales from early metazoans) and trace fossils are preserved. The change of the seabed was a crucial early Cambrian occurrence.

Ordovician period: Following the late Cambrian extinctions, the “Ordovician radiation” resulted in a threefold rise in marine diversity, the greatest increase in the history of life, and the highest levels of diversity seen during the Paleozoic Era. The Cambrian marine fauna, which was dominated by deposit feeders like trilobites, was replaced by the Paleozoic fauna, which was dominated by filter feeders stacked in tiers, throughout the Ordovician. The new Paleozoic ecosystems are dominated by tiered suspended feeder communities linked to the sea floor: brachiopods filter bottom waters, corals and branched bryozoans filter water slightly above, and crinoids filter water at the highest level.

Silurian period: The Silurian was a 28 million-year period. After the massive extinction event at the end of the Ordovician, biodiversity recovered quickly. Large reefs grew in shallow equatorial seas due to a warm environment and high sea level. The principal builders of these initial coral-based reefs were tabulate corals and stromatoporid sponges, but rugose corals and recepticulite algae also contributed. Because vertebrates were few, invertebrates remained dominating. Moss forests grew along streambeds and lakeshores when simple vascular plants evolved on land.

Devonian period: The “explosion” of Devonian vascular plants is astounding. The major vascular plant groups lycophytes (clubmosses, spikemosses, and quillworts) and euphylophytes arose from primitive Silurian-type plants (horsetails and ferns, and seed plants).These plants reshaped Earth’s ecosystems, resulting in vast marshlands. The first trees dominated the new forests, resulting in a new ecosystem and a change in global carbon cycle. Organic matter grew both on land and in the oceans through runoff, as complex soils were developed, land and water linkages were broadened, habitats became more complex and stable, and habitats became more complex and stable.

Pennsylvanian period: This Period is known as the Age of Amphibians due to their numbers and variety. A wide variety of species, notably winged insects, lived in Pennsylvania’s woodlands and wetlands. The principal herbivores were insects and other arthropods. The plant matter that subsequently created the huge coal resources of America and Europe came from the tropical forests of this period. Because of these abundant deposits, these forest flora are among the most well-known in Earth’s history. Giant club mosses and horsetails, tree ferns, seed ferns, and cordaites were among the most dominant flora (conifer-like trees).

Permian period: The Permian was a period of marine fauna specialization, with significant diversifications of ammonoids, brachiopods, and bryozoans. The most important herbivores in the early Permian were insects. A massive change in vegetation occurred in the middle of the Permian, culminating in the dramatic loss of coal swamps and amphibian habitats. Conifers and other xerophytic seed plants appeared and spread in the Permian, better adapted to shifting climatic conditions and drier  settings. Seed plants in arid climate belts have increased diversity and variability due to competition.

Triassic period: Microbial reefs first appeared in the early Triassic, and microbes dominated these early ecologies. For the first time in 400 million years, stromatolites were prevalent. The early Triassic biota is dominated by low diversity opportunistic animals and flora, both in the sea and on land. In the oceans of what is now Utah, for example, enormous beds of a near monoculture of the scallop Claria were deposited. Lycopsids dominated the low-diversity flora on land, with other opportunistic species like quilworts being uncommonly prevalent. Conifer-dominated forests did not fully supplant lycopsids on land until the middle Triassic. Dinosaurs began to take control as the Triassic period drew to a close.

Jurassic period: After nearly annihilation at the end of the Triassic, ammonites and dinosaurs made a dramatic comeback. Oysters, crabs, lobsters, and teleost (modern) fish are among the creatures that can be found. Plesiosaurs and marine crocodiles were the first predators to arrive, with icthyosaurs, sharks, bony fish, cephalopods, and a variety of other marine predators.The other main dinosaur group, the ornithicians, makes their first appearance in the Jurassic. The first birds show up in the fossil record, but flying pterosaurs of all sizes rule the air.Much of the area was covered in forests, which included conifers, gingko, and ferns, cycads, and horsetail rushes, as well as an understory of ferns, cycads, and horsetail rushes. The vast plains of modern Earth did not exist since flowering plants had not evolved and there were no grasses, making it a completely different world than it is now.

Cretaceous period: The Cretaceous Period comes to a close with one of the world’s most severe extinction events, which also marks the end of the Mesozoic Era. Flowering plants made their first appearance and began to diversify during the Cretaceous period (Angiosperms). Insects and other species quickly adapt to the novel food sources and opportunities provided by these plants. Seed ferns, ginkgos, and cycads were all replaced by conifers. Marine life thrived, with many species reaching their highest levels of abundance and diversity. Rudist mollusks create new reefs that are comparable to today’s coral reefs.

Paleogene period: It is the beginning of the Cenozoic Era of the present Phanerozoic Eon.The Paleogene is composed of the first three of these Epochs, (Paleocene, Eocene, and Oligocene Epochs). Following the K/T extinction, the Paleogene witnessed the rapid replenishing of the environment, however it took more than two million years for the Earth’s ecosystems to return. Primitive mammals and birds began to spread rapidly on land. Planktonic foraminifera and nanofossils start new evolutionary paths in the water. The wonder of Cenozoic fossils is witnessing identifiable species carved in stone, rather than exotic, ‘alien’ living forms like sea lilies, ammonoids, and trilobites of the Mesozoic and Paleozoic Eras, such as sea lilies, ammonoids, and trilobites.

Neogene period: The Neogene Period began with enormous swaths of forest being replaced by grasslands and savannahs. Mammalian and avian evolution was aided by new food supplies and niches in grasslands and savannahs. During the Miocene, whales became more diverse in the seas, and sharks grew to their highest size. Changing temperatures and continental separations resulted in complex mammalian evolution patterns.As the continents shifted into their current positions during the Neogene, the Tethys Sea gradually closed. The Neogene’s significant cooling phases result in more diverse latitudinal biotic zones.

Quaternery period: The Quaternary Period is a geologic time period that spans the last 2.6 million years, from the beginning of time to the present day.The 2.6 million years of the Quaternary represents the time during which recognizable humans existed.Massive herbivores such as mammoth, mastodon, huge bison, and woolly rhinoceros thrived in these steppes because they were well adapted to the cold. Large carnivores such as saber-toothed cats, cave bears, and dire wolves preyed on these species.The loss of several predominantly megafaunal species during the Quaternary epoch has resulted in a collapse in faunal density and diversity, as well as the extinction of critical ecological strata around the world.

A student of Department of Botany at the University of Dhaka. Opportunity seeker. Hope to do something remarkable. Email: nusratjahannitu81@gmail.com. Minimum monthly resolution- Publish(1), Revise(5), Share(1)
Previous Biodiversity: Creation of earth and details
Next Ratargul Swamp Forest: The Green Mystery & Discussion Of Plants (Part 1)