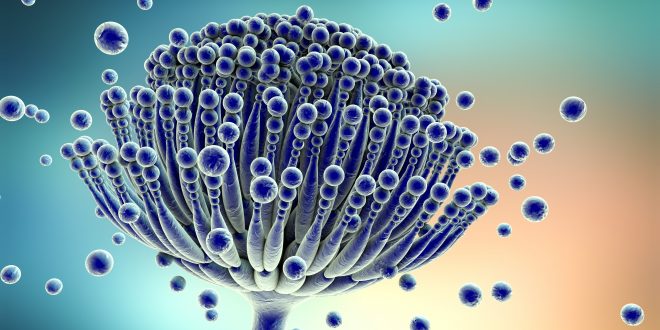 The primitive morphological character that distinguishes members of Ascomycota from all other fungi is the Ascus (pl. asci, Gr. Ascos = goat skin, sac), a saclike cell containing the ascospores (Gr. Askos + spora =seed, spore) cleaved from within by free-cell formation after karyogamy and meiosis. Eight ascospores typically are formed within the ascus, but this number may vary from one to over a thousand according to the species.

Mycelial ascomycetes are characterized further by a compartmentalized mycelium with distinctive walls, septa having simple pores, and the presence of Woronin bodies. A few of the true yeasts (Saccharomycetales) also have been reported to have simple septal pores and Woronin bodies but this is uncertain. Concentric bodies are present in the lichen-forming ascomycetes.

Ascomycetes have two distinct reproductive phases, one sexual, involving the formation of the asci and ascospores, and the other asexual, with spore production occurring at different times on the same mycelium. Some species of Ascomycota have only a sexual state. On the other hand, the vast numbers of ascomycetes known only by their asexual stages can be difficult, and the practice has been to place these taxa in the artificial group called Deuteromycota, or Fungi Imperfecti.

The somatic stages of ascomycetes may be single celled, mycelial, or dimorphic (fungi that can exist in the form of both mold and yeast). A large proportion of the cell walls of filamentous ascomycetes is chitin. Cellulose also has been reported on the hyphal walls of several ascomycetes. In the yeasts (Saccharomycetales) mannans and β-1,3-glucans are the principal wall polysaccharides, and only limited amounts of chitin are present often restricted to bud scars. In  ascomycetes the wall appears two layered, with a thick, translucent inner layer and a dense, thin outer layer. Buds of ascomycetous yeasts have new wall layers that are continuous with the parent wall (hologenous). Hyphae of ascomycetes are divided into compartments by septa that form from the hyphal periphery and advance toward the center, thus invaginating the plasma membrane. In most ascomycetes a small circular opening or pore is left near the center of the septum through which the plasma membrane and cytoplasm extend from one hyphal compartment to the next. In many yeasts that produce a mycelium a closure line demarking the complete inward growth of the septum or micropores analogous to the plasmodesmata of plants usually are present. Septal pores may be plugged or blocked by various types to membrane-bound structures. Woronin bodies (Figure-1) are spherical, hexagonal, or rectangular membrane-bound structures with a crystalline protein matrix that usually are associated with a septum. Woronin bodies frequently plug the septal pores of hyphae.

In addition to the Woronin bodies, a more complex structures occurs in some filamentous ascomycetes. These ascomycetes have membrane-bound septal pore organelles, often shaped like pulley wheels.

Another unique organelle that occurs primarily in lichenized ascomycetes is the concentric body (Figure-2). These structures have been found in the hyphae  of most lichenized ascomycetes that have been examined at the ultrastructural level but are absent when the fungus is cultured without the alga. Venturia inaequalis is an exceptional example of non-lichen forming fungi but have concentric bodies.

Hyphal compartments often are uninucleate, but mycelia consisting of multinucleate cells are well known. The perforations in the hyphal septa permit nuclei to migrate from one compartment of a hypha to another. The ability of nuclei to migrate through-out the mycelium is important in the phenomenon of heterokaryosis.

Ascomycetes may produce specialized mycelial structures, some of which are associated with host infection by pathogens. These structures include appressoria and haustoria. In addition certain ascomycetes form structures  known as hyphopodia. Capitate hyphopodia(Figure-3) are produce by some plant pathogenic ascomycetes and are considered to be a specialized form of appressorium. These are stalked, thick-walled, lobed cells that stick to host surfaces. Stalked hyphopodia have an additional function: initiation of ascocarp development upon their fusion. 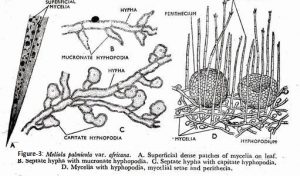 Pointed mucronate hyphopodia are best known in Meliolales, and they are not associated with infection structures. It have been reported to produce conidia that may function as spermatia.

Some of the most remarkable specializations of ascomycetes mycelia are the nooses, traps, coils, and sticky pegs that traps nematodes. The fungus mycelium is more attractive to nematodes when traps are present, and the modified trap hyphae produce lectins (carbohydrate-binding proteins) that bind to specific sites of the nematode surface.

Ascomycetes mycelium may be organized into fungal tissue (Plectenchyma). Plectenchyma differs from the parenchyma of plants because it arises from apical growth of hyphae that become closely associated only secondarily. If such a tissue is loosely woven and the mycelial strands are more of less evident, it is known as prosenchyma. If, however, the cells are more or less isodiametric, closely resembling the parenchyma of plants, it is known as pseudoparenchyma. Prosenchymatous and pseudoparenchymatous tissues are associated primarily with reproductive and resting structures of ascomycetes.

I am Shahidul Islam Shamim. I am a student of Department of Botany, University of Dhaka. I like natural Photography and always trying to find the mechanisms behind the natural mysterious.
Previous Cytpoplasmic Genetic Male Sterility
Next উদ্ভিদপ্রেমীদের চোখে কার্জনহল দেখতে যেমন

Fungi are considered to be one of the most interesting sets of organisms. Some fulfills …