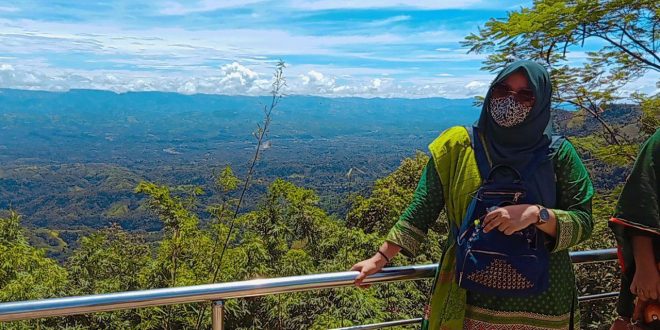 Bangladesh is blessed with a plethora of interesting spots to visit. The country has a lot to offer for a pleasant and educational trip, from gorgeous natural areas to historical landmarks.

For its daring, unusual, and scenic terrain, the most isolated and least populated Bandarban is a popular destination among the eye-catching places. The grandeur of its woods, countless waterfalls, tallest peaks, and lifestyles of 15 different ethnic groups attract visitors from both within and outside of the country. Bandarban is a must-see destination, I must say!

In the middle of September, I planned a tour of the Chittagong Hill Tracts but ended up seeing a few spots in the Bandarban district. My entire family joined me on my scheduled trip. Bandarban is a small town that may easily be explored on foot.
In Bandarban, there is a four-wheeled public transportation system known as ‘Chander gari’ (moon car). We decided to take a Chander gari ride around the neighborhood. The roads of Bandarban are zigzag. Our vehicle went upward and downward at different moments. The spectacular Shoilo Falls, Nilgiri Hill, Chimbuk Hill, Ali Kadam, Boga Lake, Keokradong, Tajingdong, and other notable locations in Bandarban got tourists point of attaraction. The journey was so exciting anyway. This whole trip made lots of beautiful memories that I would like to share in my view and also in the economic aspect of Bangladesh.

There were full of green plants everywhere. The local people cultivate various types of vegetables and fruits here and there. Even on the hilltops, several indicator plants such as wild bananas, terrestrial orchids, ferns, Lycopodiums, Tara, and arums are flourishing. For tourists, the most appealing areas are high hills, rivers, natural lakes, and springs. For a long time, twelve diverse tribes, including Bengalis of various religions, have been peacefully leaving there.

They cultivate Sajina or Drumstick (Moringa), which is a very nutritious vegetable tree crop and also known as the “Tree of Life” because of its many possible uses. The leaves are abundant in -carotene, vitamin C, iron, and potassium, and are a good source of these nutrients. The leaves are cooked and utilized in the same way as Shak. Leaves are widely used in soups and sauces after being dried and ground into powder. Calcium and phosphorus are abundant in the tree. Drumstick seeds are used as a sexual virility medicine in both men and women to cure erectile dysfunction and to prolong sexual activity.

In Bandarban, there is a huge potential for banana production. Bananas of excellent quality, such as Champa, Bangla, and Kanchkola, are grown with little or no care. Wild bananas are a good indicator of a high water table since their blooms (Mocha) and stalk are tasty. Wild species, particularly reptiles and amphibians, find these banana groves to be ideal habitats.

Many species of bamboos, such as Muli, Mirtinga, Talla, Belcoa, and Giant Bamboo, are well-grown and aid in soil formation, erosion control, and water-table maintenance; they are excellent sources of revenue as well as environmental development. Bamboos are commonly used for housing, fencing, supports, paper pulp, household appliances, furniture, crafts, mats, and even food.

Jackfruit cultivation has a lot of potential in Bandarban. It is a versatile crop that produces high-value wood that is ideal for furniture and crafts. Fruits and seeds provide a lot of nutrients, and young fruits are used as vegetables. One fruit is sufficient to complement a person’s energy for the day. Jackfruit has the potential to be a key food security crop.

Coconut trees are flourishing in Bandarban for their high-water-table vegetation. Oranges and lemons, coffee, rubber, cashew nut, areca nut, cassava, orchids, camphor, black pepper, cinnamon, and cardamom, among other crops, can be successfully cultivated in Bandarban hill tracts based on the overall environment, soil, rainfall, and humidity, as well as the indicator plants. Mushrooms have a lot of potentials as well.

The Bandarban Hill District is one of Bangladesh’s most resourceful areas. In Bangladesh, there are three types of forests (hill and sal forest, and mangroves). Geographically, CHT has hill forests that are tropical evergreen and semi-evergreen. The hills are not very old, but they receive a lot of monsoon rain and have high water tables because they are near the Bay of Bengal. More than 40% of the country’s total forest cover is found in the CHT region. Despite the fact that forest resources have historically been vital for the well-being of the local population and the national economy in the region, their sustainable use and management remain a challenge.

People in Bangladesh’s CHT region rely heavily on forest and agricultural land uses for their livelihoods (Miah et al. 2012). Forest landscapes have historically supplied a wide range of local and regional benefits, including food, energy, lumber, water, health, and the generation of national money. However, pressures from exploitation and degradation that began in the last century (Rasul 2007) and continue to this day have ramifications for forest-dependent people’s livelihood benefits in terms of direct and indirect provisioning services (Rasul 2009). Agriculture provides a significant portion of a household’s annual food demands (80% of total food intake).

CHT grows more than 35 different types of crops every year. For local ethnic groups, agricultural crops such as fruits and trees provide both subsistence and financial income. But the main cultivated crops are limited to seven including rice paddy, turmeric, ginger, and banana. Cotton and sesame were previously major cash crops, but their value has dwindled in recent years as productivity has dropped. Because of the growing demand for cash revenues, several fruit species (such as banana, jackfruit, mango, and litchi) have increasingly replaced shifting agriculture crops.

Bangladesh’s CHT region has one of the greatest fruit production rates in the country (BBS 2015). Bananas are a widely grown horticulture crop in the region. For cash revenues, it is generally farmed in shifting cultivation areas with other crops.

More than a quarter of all households produce food. In their annual farming plots and household gardens, they grow bananas (Khan et al. 2012). The yearly banana yield is approximately 88,000 tons, which is significantly greater than the national average (BBS 2011). Production of pineapple, jackfruit, and papaya has increased, make a major contribution to the average household’s economy. In addition, there is growing pineapple output as a source of prospective monetary income, especially over the last two decades.

Bandarban used to be rich in natural resources such as high humid rainforests with dominated evergreen valuable timber trees, climbers, creepers, wild animals, apes and birds, insects and bees, rivers and streams with fish and aquatic animals, hundreds of perennial streams, and Cheras, springs, and waterfalls, boulders and rocks, pebbles and grabbles, steep slopes and hilltop lakes, and ivories, among other things. The significant rivers that begin in Bandarban and flow into the Bay of Bengal are the Sangoo and Matamuhuri.

However, indiscriminate logging, hunting, and incorrect cultural practices such as Jhum, chemical fertilizer, and pesticide-dependent agriculture, and tillage on the hills and slopes, among other things, have wreaked havoc on the biodiversity and environment of the entire hill tracts region. Yet, some of the sites that are not easily accessible offer lovely visual beauty and biodiversity remnants. Gila, Tree ferns, epiphytic and terrestrial orchids, nuts and palms, canes, and many arums and shrubby plants are all rare flora.

The current district administration, on the other hand, has been working hard to improve the residents of Bandarban’s quality of life. The district council has already invested in developing road communication systems, tourism, improved security, and a more environmentally friendly living environment. Meghla, Nilachal, Shila Propat, Prantik Lake, Chimbuk, Boga Lake, Rijuk Fall, Keokradong, Tahjingdong, Golden Temple, Nilgiri, Mirinja, and Upabon are among the popular tourist destinations. Many stunning sculptures are also in the works. It is critical to prioritize the preservation of many tribes’ traditional cultures and practices.

We must not be overly eager to alter the natural ecology of hill tracts in the name of development without considering its long-term viability. We must respect natural rules and not destroy indigenous vegetation for short-term gain; rather, vast resources should be managed to conserve the diversified environment while employing ecosystem services by planting the appropriate plant (crop) at the appropriate location.

A curious girl with many questions.Want to discover life in a different way. And lastly, "Miles to go before I sleep." Author's email: armanyarju2001@gmail.com Minimum Monthly Resolution: Publish(1), Revise(1), Share(2).
Previous Bryophytes: Extensive Habitats and Distributions
Next Fungi: Importance in Economy