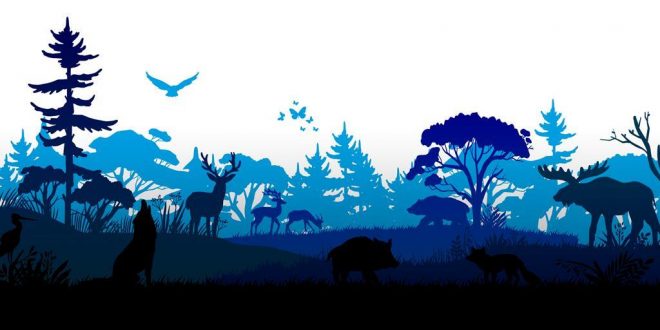 The word biodiversity was coined in the mid-1980s to capture the essence of research into the variety and richness of life on Earth. It is now widely used all over the globe by every environment related scientific or protesting community. Its rapid establishment in science and popular culture is an indication of the importance of the topic but still some have argued that “biodiversity” is too vague and trendy to be a useful word.

The word ‘Biodiversity’ does succinctly imply a fundamental idea: life on earth is extraordinarily diverse and complex. This idea is not as well captured in other words such as “nature” or “wild life.” Furthermore, “biodiversity” has entered the public vocabulary at a time when global concerns about the survival of life are at their zenith, and thus to many people the term carries a conviction to stem the loss of the planet’s life-forms.

Definitions of biodiversity usually go one step beyond the obvious – the diversity of life – and define biodiversity as the variety of life in all its forms and at all levels of organization.


So, biodiversity can be defined as the totality of genetic, taxonomic (or, specific), ecosystemic & domestic richness & variation within micro-organisms, fungi, plants & animals.

Literally, “bio” means “life” & “diversity” means “variety”, so ‘Biodiversity’ is ‘the study of variety & richness of life in biosphere’. It is a term used to describe the variability of life on Earth. It can be used more specifically to refer to all of the species in one region or ecosystem because it refers to every living thing, including plants, bacteria, animals, and humans.

The diversity of life on Earth has been a central theme of the natural sciences but it also touches on many other areas. The Bible credits Adam with the job of naming the animals, a fundamental task for facing those quantifying biodiversity. The same approaches to classifying life are apparent in ancient and modern societies.

Western culture has repeatedly revised its understanding of the variety and nature of life. The Greek philosopher Aristotle recognised between 500 and 600 species, echoing modern folk classifications which typically recognise 300 to 600. Slavish copying of classical texts was abandoned during the sixteenth and seventeenth centuries, spurred by technological advances and the spread of ideas through printing. Classification increasingly focused on the species.

The nineteenth century saw the final abandonment of the folk biology principle that lumped species together by broad type (e.g. tree) in favour of biodiversity described by detailed structure and relatedness. Our attitudes to life continue to change: the twenty-first century is dominated by our understanding of evolution, which is a powerful theory. The richness of life has been central to human society and science but the term biodiversity is an upstart.

Origin of the term ‘Biodiversity’

The origins of term ‘Biodiversity’ are credited to two papers published in 1980 (Lovejoy 1980; Norse and McManus 1980). Lovejoy, working for the World Wildlife Fund in Washington DC, contributed to The Global 2000 Report to the President of the United States, reviewing global environmental topics such as energy, human population and economics. Examining the extent of global forestry resources, Lovejoy reviewed two consequences of forest exploitation: changes to global climate and to biological diversity. Estimates of extinctions based on different forest loss rates were given. Lovejoy wrote of biological or biotic diversity defined as simply the total number of species.

Norse and McManus were ecologists on the White House Council on Environmental Quality during Jimmy Carter’s presidency and in 1980 contributed a chapter to the Eleventh Annual Report of the Council on Environmental Quality entitled Ecology and Living Resources: Biological Diversity. The chapter examines global biodiversity which is defined as two related concepts, genetic and ecological diversity (the latter equated with numbers of species).

The snappy abbreviation biodiversity (fleetingly BioDiversity) is credited to Walter Rosen, working for the American Natural Research Council/National Academy of Sciences, as a co-director for the 1986 Conference ‘The National Forum on BioDiversity’, held in Washington, DC. The publication of papers from the Forum, in a book entitled BioDiversity (Wilson 1988), was the spark igniting wider interest and usage. The contents of BioDiversity are revealing. The themes of the fifty-seven chapters in the book extend beyond pure science.

So, the term Biodiversity was proposed by Walter Rosen in 1986.

In Bangladesh, course named “Plant Diversity” in Dept. of Botany, DU was started in 1979 by National Prof. Dr. A. K. M. Nurul Islam. In 2007, it was redesigned and renamed as “Biodiversity”.

Environmental campaigning organisations have blossomed since the mid-twentieth century. WWF is typical of post-war international conservation bodies, combining research, funding conservation projects, political lobbying and public awareness. From the start, WWF had a clear publicity agenda and was launched with a six-page, shock-horror article in the British newspaper Daily Mirror linked to the plight of East African game, already seen as a tourist resource.

The 1980s saw the rise of headline-grabbing activism, most famously ‘Greenpeac’e and ‘Friends of the Earth’, which both started from small protests in 1969. Greenpeace graduated from a small demonstration closing a US–Canadian border road in 1969, via a first sailing into a US nuclear test zone in 1971 to a string of publicity-grabbing actions.

In 1975, the first anti-whaling mission resulted in film of harpoons being fired over the heads of Greenpeace inflatables into whales. In 1977, anti-seal-cull action in Newfoundland combined survival in atrocious Arctic weather with a visit by film star turned animal rights activist Brigitte Bardot (‘blood, death and sex’ – ideal).

In the developing world, campaigners fought a combination of government and business, at best corrupt and indifferent, at worst murderous. Tropical rainforests became a potent symbol. In Brazil and South East Asia, the fight against wanton clearance, often allied to rights of indigenous peoples, attracted global publicity. In Brazil encroachment of settlements and forest clearance, often illegal and enforced by private armies, had been highlighted since 1980 by the National Rubber Tappers Council, was formed to defend the rights of all those making a sustainable living from forest resources.

Rainforests are deeply photogenic. Public interest in wildlife, especially the exotic, has an ancient history from amphitheatre spectacle, royal gifts, menageries and zoos. The appetite for natural history television appears insatiable, reinforced by high quality magazines such as National Geographic in the United States, Animals, relaunched as BBC Wildlife, in the United Kingdom and Geo, in Australia.

National Geographic proved particularly influential with its photo essays and films of the great apes researchers, for example Jane Goodall and the Gombe chimps in 1963, Dian Fossey and the mountain gorillas of the Virunga Mountains in 1970. The images of heroic women in the wilds of Africa and the charismatic apes with whom they had made friends enchanted western audiences.

Wildlife media developed rapidly following the Second World War. The famous BBC Natural History Unit was founded in 1957 on the back of increasing success providing a non-sentimental, expert coverage of the natural world. By the late 1980s the developed world had a culture of wildlife television with personalities such as Jacques Cousteau and David Attenborough.

Attenborough’s Life on Earth series became a touchstone for the richness of life on Earth. Most famously his romp on the forest floor with a family of wild gorillas left a strong sense of kinship and threat. A massive, fascinated and knowledgeable audience has been able to see the literal diversity of life as never before. A night seldom goes by without TV film of animals eating each other, or mating, or sometimes doing both at once. The media impact can also be a source of problems. Superb documentaries have been accused of creating an image of a world still overflowing with life and a taste for the exotic so that the more familiar local animals and plants are ignored. The media have also been a major factor creating a sense of global anxiety. We are all instantly aware of threats to planetary health.

In the late 1980s the public, so supportive of green activists and familiar with wildlife, became aware of threats to planetary health that brought a deeper understanding than the familiar, grim but often rather local problems from oil spills (see Plate 5). Acid rain, ozone depletion and global warming combine similar themes.

By the late 1980s there was an increasing awareness of the potential of biological resources, many yet to be discovered. The value of tropical forest species (mainly plants but also animals, fungi and microbes) for medical and food uses became an important argument used to defend forests. Some examples were simply known forest products that had always been used locally but could now be marketed effectively pandering to adventurous tastes in the developed world. Suggestions included the Lulo (Solanum quitoense), a fruit from Colombia and Ecuador especially good as a juice, and Amaranth (Amaranthus spp.), a protein-rich crop once used by the Aztecs but suppressed by Spanish colonists due to religious symbolism. This is now marketed as a health food in the United States.

Improvement of existing crops through discovery of new species or strains has been promoted through several famous examples. A fourth species of Maize (Zea spp.) was discovered by chance in Mexico in the late 1970s. Maize is one of the world’s five most important crops. In 1972 botanists in Peru chanced upon a weedy new tomato. Seeds were collected but overlooked for several years. Genes from this species boosted soluble solids (the tasty component) of tomatoes by up to 50 per cent, potentially benefiting the US tomato industry by millions of dollars. Wild strains of crops may enhance resistance to disease, pests and climatic variation.

Why Biodiversity is a hot issue?

Twenty years earlier before the Rio Summit, the first UN conference on the Human Environment was held in Stockholm, Sweden from June 5-16 in 1972. Widely labelled as a dialogue of the deaf, the Stockholm conference came out fruitless as developed countries asked poorer nations to clean up environmentally destructive development whilst the developing countries wished for economic growth, even if pollution and degradation were the price. Thus, ‘World Environment’ became a debatable issue between developed and underdeveloped nations.

This convention was signed by 155 states at the Summit between 5 and 14 June 1992. Of the 105 princes, presidents and prime ministers who had come to Rio (despite much touted threats from gangs of muggers and transvestite carnivals) and gave formal speeches, 67 specifically mentioned biodiversity (or biological diversity). Biodiversity had become a dominating theme, most famously immortalised by US President George Bush Senior.

Faced with impending presidential elections, President Bush would not commit himself to attend, unwilling, as he put it, to save squirrels if it cost one American job. He did attend Rio, did not sign the convention whilst there, and did not get re-elected. However, his successful rivals had maintained a strong environmental agenda.

Biodiversity got familiarity: A global convention, havering US president and ‘biological diversity’ a popular buzzword for 67 heads of state – biodiversity had gained a familiarity greater than any other ecological concept and in a remarkably short space of time. This spectacular debut suggests something more than scientific rigour and academic interest. Biodiversity had caught a wider mood.

A girl with a lot of dreams to accomplish and make her parents proud. Currently studying in 1st year of B.Sc in University of Dhaka. Want to walk with Plantlet a long way. Interested with debate, music, photography and poem recitation. Email: syedanusratbd@gmail.com Minimum Monthly resolution: Publish (1), Revise(1), Share (1)
Previous Relation of Climate and Biodiversity and its threat
Next Biodiversity: Life & Some Basic Concepts