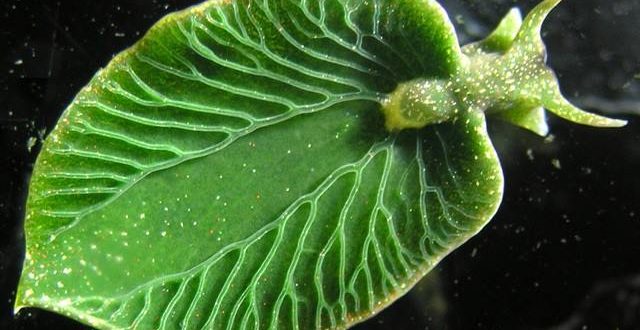 Elysia chlorotica: The Solar-Powered Half Animal, Half Plant Sea Slug

When we think of animals and plants, we have a pretty good way of dividing them into two distinct groups: one converts sunlight into energy and the other has to eat food to make its energy. Well, those dividing lines come crashing down with the discovery of a sea slug that is truly half animal and half plant. It’s official name is Elysia chlorotica.

In this article, incredibly interesting facts of Elysia chlorotica will be discussed explicitly.

Chlorophyll Production: From Plant To Animal

Elysia chlorotica, the creatures do something no other animals do: they can produce chlorophyll, the green pigmentation which is a key ingredient in allowing plants to photosynthesize sunlight into useful energy. These sneaky slugs seem to have stolen the genes that enable this skill from algae that they’ve eaten. With their contraband genes, the slugs can carry out photosynthesis — the process plants use to convert sunlight into energy.

The slugs can manufacture chlorophyll, the green pigment in plants that captures energy from sunlight and hold these genes within its body. The term Kleptoplasty (retention of “stolen plastids”) is used to describe the practice of using hijacked genes to create nutrients from sunlight. It’s pretty incredible how these green slugs manage to hijack the genes of the algae on which it feeds. The name of this algae is Vaucheria litorea. Elysia chlorotica  lives in a subcellular endosymbiotic relationship with chloroplasts of this marine heterokont alga Vaucheria litorea.


So far, Elysia chlorotica, the green sea slug is the only known animal that can be truly considered Solar-powered, although pea aphids and spotted salamanders exhibit some plant-like behaviors. Many scientists have studied the green sea slugs to confirm that they are actually able to create energy from sunlight.

Karen Pelletreau’s study shows close-up photos of the sea slug’s skin. These are given as follows:

The explanation of the above two figures are mentioned below:

(A) A defined tubule of the digestive diverticula extending into the parapodial region of the animal (arrow). The digestive system consists of densely packed tubules that branch throughout the animal’s body. Each tubule is made up of a layer of single cells containing animal organelles and numerous algal plastids. This cell layer surrounds the lumen.

(B) Magnified image of the epidermis of E. chlorotica showing densely packed plastids. The animals are light grey in color without their resident plastids, which contribute chlorophyll to render the sea slugs bright green.

These sea slugs live in salt marshes in New England and Canada. In addition to burglarizing the genes needed to make the green pigment chlorophyll, the slugs also steal tiny cell parts called chloroplasts, which they use to conduct photosynthesis. The chloroplasts use the chlorophyl to convert sunlight into energy, just as plants do, eliminating the need to eat food to gain energy.

Sidney Pierce is a biologist at the University of South Florida in Tampa. He has been studying the unique creature Erysia chlorotica  for about 20 years. He presented his most recent findings at the annual meeting of the Society for Integrative and Comparative Biology in Seattle.

In this meeting, Pierce said-

Experiment on the Photosynthesis capacity of Erysia chlorotica

Sea slug is so good at photosynthesis that they can live up to 9 months without having to eat any food. They get all their nutritional needs met by the chloroplasts that they’ve hijacked from the algae.

Pierce has conducted experiment on Erysia chlorotica to observe for how long time these sea slugs can survive by photosynthesis only and without any food. Regarding this, he said, “We collect them and we keep them in aquaria for months. As long as we shine a light on them for 12 hours a day, they can survive [without food].”

The researchers used a radioactive tracer to be sure that the slugs are actually producing the chlorophyll themselves, as opposed to just stealing the ready-made pigment from algae. In fact, the slugs incorporate the genetic material so well, they pass it on to further generations of slugs. The babies of thieving slugs retain the ability to produce their own chlorophyll, though they can’t carry out photosynthesis until they’ve eaten enough algae to steal the necessary chloroplasts, which they can’t yet produce on their own.”

The slugs accomplishment is quite a feat, and scientists aren’t yet sure how the animals actually appropriate the genes they need.

“It certainly is possible that DNA from one species can get into another species, as these slugs have clearly shown,” Pierce said. “But the mechanisms are still unknown.”