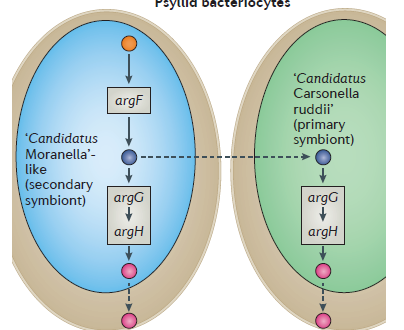 Healthy animals are colonized by microorganisms routinely. The Human Microbiome, for example, is restricted to five body sites, such as skin, oral cavity, pulmonary tract, gastrointestinal tract, and urogenital tract. Some animals are, however, colonized by sub­stantial populations of microorganisms at sites inside of the body wall, e.g. in the blood or within (or between) cells of specific organs and hence, these internal micro­organisms are termed as endosymbionts.

An endosymbiont or endobiont is any organism which lives within the body or cells of another organism (as host) in a mutualistic relationship, often but not always to mutual benefit. Endosymbiosis, though are widespread in insects along with some other invertebrate groups but are exceptionally rare in vertebrates. The only intracellular endosymbiont described in vertebrates is the alga Oophila amblystomatis in embryos of the spotted salamander Ambystoma mac­ulatum.

This endosymbiotic relationship has significantly contributed to the evolution of life on earth. The endosymbionts have the capability to induce a multitude of different phenotypes, for example, changing of host sex ratios, defense against pathogens as well as the behavior of host organisms. Among these relationships, at least 15-20% of all insects have been estimated as bacterial symbioses. Endosymbiosis evolved due to drastic genome reduction.  As a consequence of loss of selection of multiple gene functions, free-living bacteria became host-associated and started the process of genome reduction.

2) Genome Reduction and Co-evolution between the Primary and Secondary Bacterial Symbionts of Psyllids. (doi:10.1093/molbev/mss180)

This is an official account of this website. This ID holds articles from two categories. 1. Articles from our non-authors. 2. Articles of the authors whose IDs were deleted.
Previous Biochemical Composition of Some Selected Aquatic Macrophytes Under Ex-situ Conditions
Next গাছকে আমরা কতটুকু জানি ?