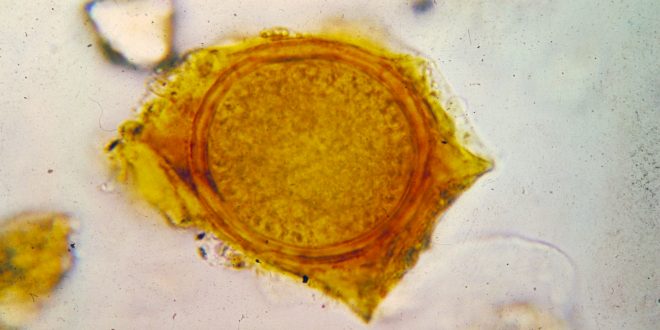 Synchytrium endobioticum is one of the chytrid fungi which causes black scab or the wart disease of potato. Though potato is the only cultivated host but Some other plants of the genus Solanum are also infected by it.

According to Karling (1964), it has a broad spectrum of Solanaceous sp. in its host range. The potato wart disease is widely distributed in the potato growing regions of the world.

It is prevalent in areas with a cool moist climate. In India, it has been reported from the Darjeeling district (West Bengal) and areas of Nepal contiguous to the former. The fungal parasite cannot survive in hot places.

The thallus is colonial and divides into several reproductive organs that are enveloped in a common membrane and form a sorus.

Either zoospores or gamates are developed from the sorus ,this is controlled by the environment wheather the motile cells will be asexual zoospores or sex  cells. It depends on the presence of sufficient water at a critical point in their development. In nature, more zoospores are formed at the beginning than the end of the season and the reverse is true for gamets. If zoospores are developed than those are released from the sorus and penetrates host cell and germinates into nature thallus.

The asexual phase of the life cycle of this endobiotic fungus starts with the infection of the host by the parasite.

Infection: S. endobioticum is living the wart tissue of potato tuber or in soil. Some mycologists call them resting or winter spores. They remain viable for a long period. Under suitable conditions (presence of potato seedlings in the field, moist soil and suitable temperature), the resting sporangium or spore germinates releasing posteriorly uniflagellate, naked haploid zoospores which are liberated by the rupture of the enclosing membrane.

Prosorus Stage: Once within the epidermal cell of the host it quickly sinks to its lower part (D) where it improves into a uninucleate intracellular thallus with a comparatively a big nucleus (D) at the expense of the food material absorbed from the host cell. The unicellular parasite rounds off and secretes a thin wall around it. It increases in size and become pear-shaped. The mature thallus with a heavy golden wall on all sides of it is called the prosorus.

Germination of Prosorus: The mature prosorus germinates in the dead host cell. A pore is made in the thick exospore layer. During migration, prosorus nucleus divides (G) continuously to form about 32 daughter nuclei. The multinucleate protoplast of the vesicle is now parted by newly formed thin, hyaline walls into four to nine multinucleate polygonal compartments (H) or segments.

Sporangia: The nuclei in each sporangium undergo further division to form 200 to 300 daughter nuclei. Each daughter protoplast converted into metamorphosed into a posteriorly uniflagellate zoospore. Some of these zoospores may reinfect the host and repeat the sequence of events outlined above. This reproduction completes the asexual phase in the life cycle of Synchytrium.

Gametangia: Under conditions of absence of water (dry weather), the segments of the prosorus act as gametangia (A) which are in no way different from sporangia. The gametangia produce planogametes. Fusion occurs after liberation in a film of water on the surface of the host between planogametes from different gametangia in the same sorus. Plasmogamy (fusion of the gametes) is pursued by karyogamy which probably takes place at the time of host penetration.

Zygote: The diploid zygote made  by the fusion of the planogametes is biflagellate. It swims about in a film of water in the soil. Finally it comes to rest on the surface of the host (tubers) and penetrates the epidermal cell (E) in much the same way as the haploid zoospore. In the host the zygote sinks to the bottom of the infected hypertrophying epidermal cell of the host and grows in size.

Resting Sporangium: The presence of the parasite (zygote) in the host causes hypertrophy and hyperplasia of the surrounding cells. They are stimulated to divide repeatedly. Consequently, the infected cell is soon buried deep in the host tissue. The diploid zygote (parasite) enlarges and is enclosed in a thick, reticulately adorned, two-layered wall to become a resting sporangium. Some deviser call it a resting or winter spore.

Germination of resting Sporangium: when the conditions are conducive for growth (following spring when the host is available), the resting sporangium germinates. A number of granule-like structures make their appearance in the cytoplasm. These are zoospore primordia. The multinucleate protoplast pass through cleavage to form numerous uninucleate, daughter protoplasts. Each daughter protoplast gets transformed into a posteriorly uniflagellate zoospore. This completes the sexual phase in the life cycle of Synchytrium.

Pest Importance: This species was once considered the most serious disease of potato but has been controlled fairly well through phytosanitary measures and resistant potato varieties. This species is still considered an vital pest of potato due to the long-lasting resting sporangia. Also, new strains of the fungus are susceptible of attacking previously resistant potato varieties (DEFRA, n.d.).

This is an official account of this website. This ID holds articles from two categories. 1. Articles from our non-authors. 2. Articles of the authors whose IDs were deleted.
Previous Importance of Soil Solution
Next Taxonomy : Polymerase Chain Reaction

Fungi are considered to be one of the most interesting sets of organisms. Some fulfills …