The members of the family are cosmopolitan and specially abundant in the warmer parts of the tropical and temperate regions. 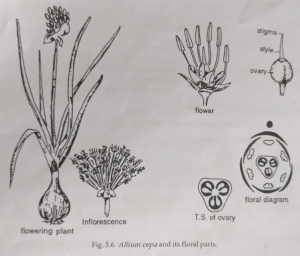 Usually perrenial herbs, persisting by means of bulb or rhizome.

Simple, alternate or whorled, mostly parallel veined, exstipulate (leaves with no stipule. But its not similar with sessile), tendrillar(modified stipule).

Lobes 6 in 2 whorls of 3 each, lobes are termed as tepals(unit of perianths, not differentiated into calyx and corolla) free or united petaloid, usually imbricate or the outer lobes valvate.

With carthlaginous or fleshy endosperm, embryo straight or curved.

A 1st-year student of Department of Botany at the University of Dhaka. Opportunity seeker. Hope to do something remarkable. Email: nusratjahannitu81@gmail.com. Minimum monthly resolution- Publish(1), Revise(5), Share(1)
Previous Dicotyledonous Family: Lamiaceae
Next Water Absorption by Plants