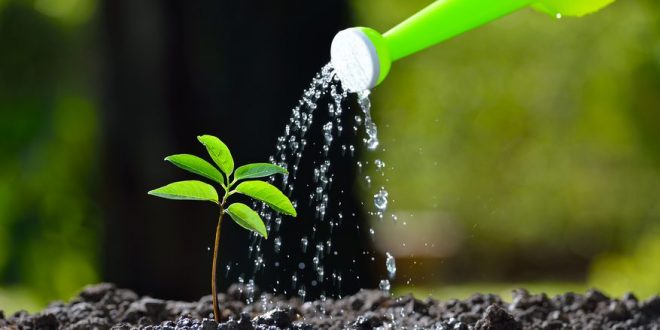 Uptake of water by plants more specifically by plant root hair is called water absorption. It is a vital process in case of plants as uptaken water along with minerals are mandatory for the survival of the plant body. In case of lower plants, the whole body acts as water absorbing organ but in higher plants, specific portion of the root absorbs water.

There are three kinds of water that are found in the soil namely: gravitational water, hygroscopic water, and capillary water. Among these water types, only the capillary water is useful for the plant.

Understanding capillary water: After rain, most of the water is absorbed by the soil. Though major part of that water is drained out of the soil, a small portion gets trapped between the narrow spaces of soil particles. This entrapped water that follows the laws of capillary action is known as capillary water.


From apoplastic pathway, water may enter into symplastic root and thus water passing is regulated.

Mechanism of absorption of water

In higher plants, water is absorbed through root hairs which are in contact with soil water and form a root hair zone a little behind the root tips. Root hairs are tubular hair like prolongations of the cells of the epidermal layer of the roots.

Mechanism of water absorption in plants is of two types:

In active absorption, the root hair cells play active role in water absorption by consuming metabolic energy (ATP) i.e. water is absorbed by roots’ own effort. So, this type of water absorption causes the increase in respiration rate.

Osmotic diffusion of water into endodermis takes place through special thin walled passage cells. Because the other endodermal cells have casperian strips in their walls which are impermious to water. Casperian strip is made up of suberin or wax which are hydrophobic. 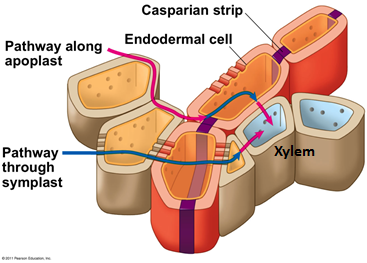 Active absorption may be of two types:

Passive absorption doesn’t require any metabolic energy. It occurs with the help of metabolic activity like transpiration. Here, due to transpiration, a pull or tension is created along the water column that extends from the leaf to the root. So, as water evaporates from the leaf stomata, the pull causes water entry inside the root xylem. Thus water is absorbed.

Evidence in support of passive absorption can be given by cutting the roots under water. The absorption of water still continues if all the roots are removed. This proves that root isn’t mandatory here and water is absorbed because of the pool created through respiration.

2. Concentration of the soil solution

As shown in the active absorption, the process is quite dependent on concentration gradient. The concentration in soil thus plays a major role in determining whether energy is required or not and to what quantity.

Absorption of water is retarded in poorly aerated soils because in such soils the deficiency of O2 and consequently the accumulation of CO2 will retard the metabolic activities of the roots like respiration. This also inhibits the active absorption of water.

The optimum temperature is 20-35 degrees Celsius.

Difference between active and passive absorption

Currently in 4th year (Hons) in the Department of Botany, University of Dhaka. Planned to have multiple careers one by one but promised to be with 'Plantlet' as long as it's primary stage remains unfinished. Email: abulaisshomrat@gmail.com. Minimum monthly resolution - Publish (1), Revise (3), Share (5)
Previous Monocotylidonous Family: Liliaceae
Next Ascent of Sap

Would be much more benifitial with quick view of difference table/s.

Hope you like it now.
Would be glad if you can drop any new point or suggestion regarding this article.

its on next level. thanks for letting us know