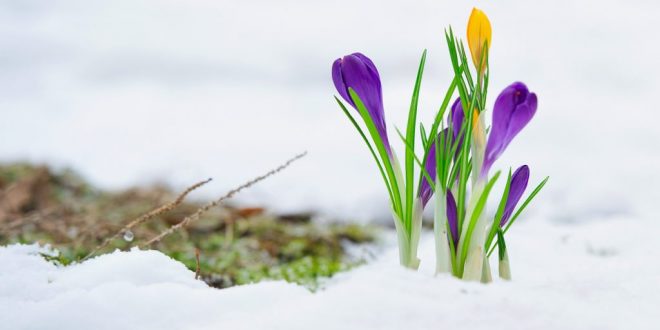 In case of some plants, even though they receive proper photoperiod, they do not flower. It means that apart from photoperiodism plants also require something for their subsequent flowering. But what is that?

The word vernalization originated from Latin ”vernus” which means “of the spring”. Vernalization is the induction of a plant’s flowering process by exposure to the long period of cold of winter, or by an artificial equivalent.

After vernalization, plants have acquired the ability to flower, but they may require additional seasonal cues or weeks of growth before they will actually flower.

In 1928, the Soviet agronomist Trofim Lysenko published his works on the effects of cold on cereal seeds and coined the term “яровизация” (“jarovization”) to describe a chilling process he used to make the seeds of winter cereals behave like spring cereals (Jarovoe in Russian, originally from jar meaning fire or the god of spring). Lysenko himself translated the term into “vernalization” (from the Latin vernum meaning Spring).

After Lysenko, the term was used to explain the ability of flowering in some plants after a period of chilling due to physiological changes and external factors.

The formal definition was given in 1960 by French botanist P. Chouard, as “the acquisition or acceleration of the ability to flower by a chilling treatment“.

Perception of the Cold Stimulus

The cold stimulus is perceived by the apical meristems. But the work of Wellensiek (1964) on the vernalization of the excised or isolated left and root of Lunaria biennis has shown that all dividing cells including those in roots or leaves may be the potential sites of vernalization.

Presence of a Floral Hormone

It is believed that the perception of the cold stimulus results in the formation of a floral hormone which is transmitted to other parts of the plant.

The floral hormone has been named vernalin but it is yet to be isolated.

But some indirect evidence supports the existence of vernalin. Melchers performed two experiments:

∗But florigen also passes through graft union. Therefore, some physiologists suggested that florigen might be the vernalization stimulus.

The low-temperature treatment produces vernalin. This vernalin induces flowering. However, this hypothetical hormone vernalin cannot be isolated. But some plant physiologists believed that some plant growth hormone gibberellins may act as vernalin.

Evidence of gibberellins as vernalin:

1. Anton Lang in 1957 applied gibberellins on biennials like henbane. Henbane requires a vernalization stimulus for flowering. Gibberellins induced flowering in it without cold temperature treatment.

2. Purvis in 1961 induced flowering in winter annuals by treating their seeds with gibberellins.

3. It was also found that the exposing of vernalization requiring species to low-temperature treatment produces a large amount of natural gibberellin. These indicate that the properties of gibberellins are similar to vernalin.

Objections on gibberellins as vernalin:

1. Gibberellin can induce flowering in long-day plants. However, if plants require both, i. e., long days and cold treatment, the gibberellins cannot substitute for both.

2. In rosette plants, such as henbane; gibberellins may only promote stem elongation and not flowering.

Hence, it may be stated that gibberellins and vernalin are two different compounds.

1. Phasic Development Theory: The theory was proposed by Lysenko in 1934. According to this theory-

Vernalization of the winter wheat accelerates the first thermophase so that there is an early swing from vegetative to the reproductive phase or flowering.

2. Hormonal Theory: It has already been described that vernalization probably involves the formation of a floral hormone called vernalin. Based on this fact, many hypothetical schemes have been proposed by different workers from time to time.

Purvis, 1961 proposed a hypothetical scheme to describe the mechanism of flowering in cereals.

According to this scheme, the compound A is converted into B by cold treatment. The compound B can also be formed under normal temperature conditions. If high temperature is given the compound B changes to E which is probably a leaf forming substance. The reactions B to C to D remain under photoperiodic control. Here, D represents the flowering hormone whereas C is an intermediate. In vernalization winter rye or spring rye, under continuous light ( i. e., long days) B changes to C slowly and C into D rather quickly. When a sufficient amount of D is formed, flowering occurs. Under short days the reaction C to D is checked and the B changes to E. Hence no flowering takes place.

Note: The effect of vernalization become erased at -6°C. Because, below freezing point, cell division becomes unlikely/gets arrested (as ice crystals within the tissue are formed). The microscopic investigation has also failed to reveal it.

3. Age of the plant: The age of the plant is an important factor in determining the responsiveness of the plant to the cold stimulus and it differs in different species. For example, in cereals like the winter wheat, the vernalization is effective only if the germinating seeds have received cold temperature treatment for sufficient time, while in case of the biennial variety of henbane (Hyoscyamus niger) the plants will respond to the cold temperature treatment only if they are in the rosette stage and have completed at least 10 days of growth.

4. Water: Sufficient amount of water is also essential for vernalization. Vernalization of the dry seeds is not possible.

5. Oxygen: The vernalization is an aerobic process and requires metabolic energy. In absence of oxygen, the cold treatment becomes completely ineffective.

To erase the effect of vernalization, a reverse process is applied which is known as devernalization.

The practical utility of Vernalization

1. Vernalization shortens the vegetative period of the plants.

2. It increases the cold resistance of the plants.

4. Increases the resistance of plants to fungal diseases.

I, Shraboni Mostofa, am currently studying B.S. Honours (2nd year) in Department of Botany, University of Dhaka. I have the interest to work in the biological research field as a scientist. I want to contribute to the world something that really matters. I am always trying to improve myself as a good creation of the Great Creator. Email: shrabonimostofa@gmail.com. Minimum monthly resolution: Publish (1), Revise (1), Share (1).
Previous Economic Botany: Plants as Sources of Economic Products
Next Seed Dormancy: Reasons, Breaking Methods and Advantages

There are several factors that influence seed germination such as temperature, moisture and seed dormancy. …