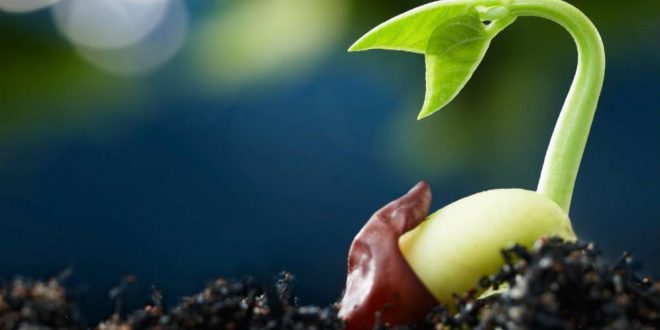 In most cases, these seeds germinate if placed on a moist substrate. The process of seed germination starts with the imbibition of water by seed coats and the emergence of the growing root tip of the embryo. It ends when the embryo has developed into a seedling that is out of bounds of seed coats and has its own photosynthetic system. Before describing the physiological and biochemical changes accompanying the seed germina­tion, it is better to evaluate the physiological state of the seed immediately before germination.

Before germination seed is a dry structure with various metabolic activities reduced to a minimum. It has a dry, comparatively hard seed coat consisting of usually non-liv­ing cells. This seed coat and the cells of endosperm when present form a barrier to the outward growth of the embryo.

Moreover, in certain seeds, the seed coat is imper­meable to water and O2 and acts as a barrier between the embryo and these substances. There­fore, the cells of the seed coat and endosperm (when present) must become permeable to water and oxygen, also these must become penetrable to the growing root tip of the embryo if germination is to occur. Most part of the embryo (excluding cotyledons) consists of potentially meristematic cells. But still, these cells do not divide and enlarge and have a minimum respiration rate in the dry seed. It is chiefly due to the following reasons-

(i) In absence of a sufficient amount of water, these cells are unable to maintain turgor so that their growth is checked.

(ii) These cells do not have a sufficient amount of soluble respirable food. The reserve food stored in cotyledons or endosperm is in insoluble form and is not available to these cells.

(iii) Aerobic respiration in embryo cells is at its minimum. It is because the seed coat acts as a barrier to O2. Oxygen uptake in dry seeds is reduced to about 0.05 µ1/g tissue/hr.

(iv) Seed coat may contain inhibitors that check the growth of these cells.

(v) The concentration of hydrolytic enzymes is low in dry seeds.

(vi) Hard seed coat forms a physical barrier to the growth of an embryo.

All these above conditions are admirably overcome if seeds are placed under suitable conditions essential for germination and in most cases seed germination begins just by placing the dry seeds on a moist substrate.

1. Water Uptake: Seed germination, as mentioned earlier, starts with the imbibition of water by dry seed coat which is purely a physical process. Various hydrophilic groups such as —NH2, — OH, — COOH etc., of proteins, polymeric carbohydrates etc., found in the seed coat attract dipolar water molecules and form hydrated shells around them resulting in the swelling of these substances. This water uptake by swelling is followed by intensive water uptake associated with germination. Due to the imbibition of water, the seed coats become (i) more permeable to O2 and water and (ii) less resistant to outward growth of the embryo.

2. Respiration: The uptake is accompanied by a rapid increase in the respiration rate of the embryo. Initially, there may be anaerobic respiration but it is soon replaced by aerobic one due to the availability of O2. As compared to dry seeds, the uptake of O2 in germination seeds may rise in case of cereals from 0.05 µ 1/g tissue/hr to 100 µ 1/g tissue/hr within a very short period after germination when water content has reached about 40%. Sucrose is probably the respi­ratory substrate at this stage which is provided by endosperm.

(i) Building blocks for the development of the embryo,

(ii) Energy for the biosynthetic processes, and

Changes in these components during seed germination are described below:

(i) Nucleic Acids: In monocots, during the imbibition stage of seed germination, there is a rapid decrease of DNA and RNA content in the endosperm with a simultaneous increase in the embryonic axis probably due to their transportation as such. An appreciable amount of RNA appears in the aleurone layer after about 16 hours which is probably due to its de novo synthesis. A higher concentration of RNA (and also protein) in the embryonic axis precedes cell division. Due to more cell divisions, the DNA content is increased.

(ii) Carbohydrates: Insoluble carbohydrates like starch are the important reserve food of cereals in the endosperm. During germination, starch is hydrolysed first into maltose in the presence of α-amylase and β-amylase and then the maltose is converted into glucose by maltase. The glucose is absorbed by the scutellum, converted into soluble sucrose and trans­ported to the growing embryonic axis.

(iii) Lipids: Many plants like castor beans, peanuts etc. store large amounts of neutral lip­ids or fats as reserve food in their seeds. During germination, the mobilization of these fats is brought about by hydrolysis of fats to fatty acids and glycerol by lipases and P-oxidation of fatty acids to acetyl-CoA. The activity of lipases is greatly stimulated by imbibition and in some cases, there may even be de novo synthesis of these enzymes which is probably trig­gered by gibberellic acid.

Some of the acetyl-CoA is converted into sucrose via the glyoxylate cycle and is transported to the growing embryonic axis. Synthesis of the two key enzymes of the glyoxylate cycle (i.e., isocitratase and malate synthetase) takes place de novo during the early stages of germination. Their concentration is increased during the stage when fats are being actively converted into sucrose. They disappear when all the stored fat has been consumed and the seedling has developed the photosynthetic system.

(iv) Proteins: Some plants store proteins as reserve food in their seeds in the form of aleurone grains. Mobilization of these proteins involves their hydrolytic cleavage into amino acids by peptidases. These enzymes, in part, are synthesized de novo as the germination starts in the same way as a-amylase is synthesized in cereals. The amino acids may either provide energy by oxidation after deamination or may be utilised in the synthesis of new proteins.

During seed germination, there is an active synthesis of enzymes and other proteins and also the formation of different RNA species for their synthesis. For the synthesis of these proteins, polysomes are involved. It is not definite whether these are already present in the seed or are synthesized during germination. Moreover, it is also not certain whether polysomes are synthesized de novo or from pre-existing m-RNA.

(v) Inorganic Materials: A number of inorganic materials such as phosphate, calcium, magnesium and potassium are also stored in seeds in the form of phytin. These materials which may activate a number of important enzymes are liberated during germination due to the activity of various phosphatases including phytase.

4. Emergence of seedling out of the seed coat: All these changes described above gradu­ally result in splitting of seed coat and the emergence of the growing seedling. First, the radicle comes out and grows downward, then the plumule comes out and grows upward. Due to the contin­ued growth of this seedling, the latter comes out of the soil, is exposed to light and develops its own photosynthetic apparatus.

After their maturation, the seeds do not remain viable indefinitely. They have a particular life span during which they must germinate otherwise they lose their viability (or capacity to germinate) first gradually and finally completely. The life span of seeds which may vary from a few weeks to many years depends upon (i) species and (ii) the environmental conditions pre­vailing during seeds storage.

Ewart (1908) divided the seeds into 3 categories depending upon their life span or longevity:

(1) Microbiotic: Seeds with a life span of a few weeks to 4 years.

(2) Mesobiotic: Seeds with a life span ranging from 3 years to 15 years.

(3) Macrobiotic: Seeds with a life span varying from 15 years to 100 years or more. The seeds of most of the crop plants have usually a very short lifespan and belong to the first category. In such cases, the longevity of the seeds can be increased to a considerable extent by keeping them under suitable storage conditions. On the other hand, seeds of considerable num­ber of wild plants remain viable for 50 years or more because of pronounced dormancy of such seeds caused by the presence of hard seed coats.

Seeds of Cassia bicapsularis and C. multijuga had been found to remain viable even after 100 years. Besides these two legumes, other seeds with a life span of 75 years or more have also been found to be legumes. But the credit for the longest life span goes to the viable seeds of Indian lotus (Nelumbo nucifera) which have been found buried under peat and soil in Manchuria. It is believed that these viable seeds must have been at least 130 years old and probably even 200-400 years old.

I, Shraboni Mostofa, am currently studying B.S. Honours (2nd year) in Department of Botany, University of Dhaka. I have the interest to work in the biological research field as a scientist. I want to contribute to the world something that really matters. I am always trying to improve myself as a good creation of the Great Creator. Email: shrabonimostofa@gmail.com. Minimum monthly resolution: Publish (1), Revise (1), Share (1).
Previous Seed Dormancy: Reasons, Breaking Methods and Advantages
Next Bryophyta: Classification and Identification of Bryophytes