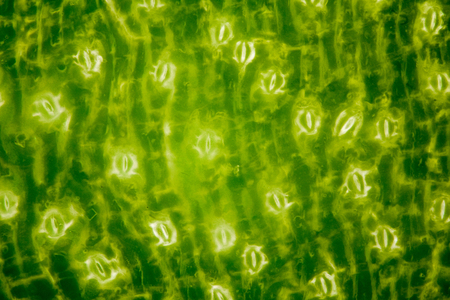 We cannot see stomata with our naked eyes. There are about 300 stomata per square mm area of the leaf surface.

In this article, we will know about the structure, different types, and functions of stomata.

The stomata are minute pores or openings found in the epidermis of leaves, stems, and other plant organs that allow gases such as carbon dioxide, oxygen, and water vapor to diffuse into and out of the internal tissues of the plant.

Stomata is the plural form of the stoma. In greek, stoma means “mouth”. The Stomata are apertures in the epidermis of the plants.

Different classifications of stoma types exist. One of them is the classification of Metcalfe and Chalk (1950), based on the number and arrangement of the subsidiary cells that surround the two guard cells. According to them, stomata are of seven kinds. They are as follows:

Anomocytic stomata have guard cells that are surrounded by a limited number of subsidiary cells that have the same size, shape, and arrangement as the rest of the epidermal cells. These are also called the ranunculaceous type. This type of stomata can be found in more than a hundred dicot families including Apocynaceae, Boraginaceae, Chenopodiaceae, and Cucurbitaceae.

In this type, the stoma has guard cells that are surrounded by three unequally sized subsidiary cells of which one is distinctly smaller than the other two. It is also called the cruciferous type. This type of stomata can be found in more than thirty dicot families, such as Brassicaceae, Solanaceae, and Crassulaceae.

Diacytic stomata have guard cells surrounded by two subsidiary cells, that each encircle one end of the opening and contact each other opposite to the middle of the opening. These are sometimes called the caryophyllaceous type. This type of stomata can be found in more than ten dicot families such as Caryophyllaceae and Acanthaceae.

In this type, the stomata have guard cells that are surrounded by at least five radiating cells forming a star-like circle. This is a rare type of stomata that can for instance be found in the family Ebenaceae.

This type of stomata is surrounded by four or more subsidiary cells forming a narrow ring around the guard cells. Examples: Palmae, Pandanus, Cyclanthaceae.

Gramineous or graminoid stomata have two guard cells surrounded by two lens-shaped subsidiary cells. The guard cells are narrower in the middle and bulbous on each end. This middle section is strongly thickened. The axis of the subsidiary cells is parallel to the stoma opening. This type can be found in monocot families including Poaceae and Cyperaceae.

I, Shraboni Mostofa, am currently studying B.S. Honours (2nd year) in Department of Botany, University of Dhaka. I have the interest to work in the biological research field as a scientist. I want to contribute to the world something that really matters. I am always trying to improve myself as a good creation of the Great Creator. Email: shrabonimostofa@gmail.com. Minimum monthly resolution: Publish (1), Revise (1), Share (1).
Previous Mutation Breeding: Material Selection, Dosage, Procedure & Precaution
Next Experimental Designs (Part-1): Principle and Concept

I’m glad to hear that. Thank you for your feedback.

Well organised. I really liked it

Thank you so much for your kind appreciation💚.

it was helpful to understanding types of stomata. thank you