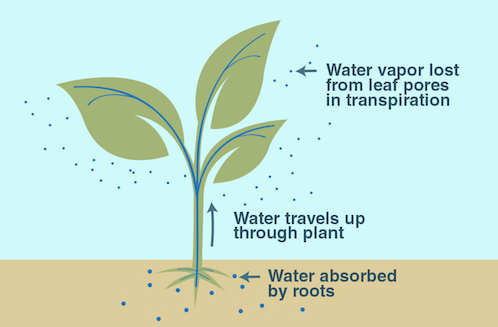 Water is absorbed by the plant through the root. The absorbed water is transported to the leaf and ultimately passed out to the atmosphere through the stomata. The water molecules inside the plant both in shoot and root create a water column. As the water potential is low out in the atmosphere, each time water hydrogen bond breaks down in the stomata and a molecule is released in the atmosphere. Thus a tension (from top to bottom) is created in the chain and so another molecule is added in the other end of the water column at the root hair. In this way, the system continues…..

Driving force in this mechanism is the evaporation of water from the surface of the leaf (transpiration). The evaporation causes tension which results in the pull of the water column and ultimately water comes out of the stomata.

So, transpiration is the driving force of water movement inside the plant.

The loss of excess water from the aerial parts of plants in the form of water vapor is known as transpiration.

There are three kinds of transpiration:

Most of the transpiration take place through stomata. Stomatal openings on the leaf make up only about 1% of the surface area.

In mesophyte or land plants,

Stomata contains a pore called stomatal pore being surrounded by two guard cells. The inner wall of the cells toward the pore is very thick and the outer wall away from the pore is thin. Typically guard cells contain a few chloroplasts, whereas their neighboring epidermal cells usually do not (except in ferns and in some aquatic angiosperms). Typically, there are no (or incomplete) plasmodesmata connecting the protoplasts of guard cells and accessory cells, but there may be plasmodesmata between guard cells and mesophyll cells below.

The guard cells have different shape and arrangement in monocot and dicot plants.

In dicot plants, the guard cells are

In monocot plants, the guard cells are

The waxy cuticle on leaf surfaces restricts diffusion, so most water vapour and other gases must pass through the opening between the guard cells.

Effects of light quality on stomata

Sharkey and Raschke (1981) measured the wavelengths of light that were most effective in causing stomatas to open. Blue light (430 to 460 nm) was nearly 10 times as effective as red light (630 to 680 nm) in producing a given stomatal opening. There was only a slight response to green light.

The red light response is apparently caused by light absorbed by chlorophyll, but the blue light effect is independent of photosynthesis.

Edwardo Zeiger and Peter Hepler (1977) showed that blue light would cause isolated guard cell protoplasts to absorb K+ ions and swell, which in intact stomatas is what causes stomatal opening.

Does photosynthesis occur in guard cells?

This classical theory is based on the effect of pH on starch phosphorylase enzyme which reversibly catalyses into conversion of starch + inorganic phosphate into glucose-1-phosphate.

During daytime, CO2 concentration is low in guard cells because of photosynthesis. Hence the pH of the guard cells will increase favoring the hydrolysis of insoluble starch into soluble glucose-1-phosphate. So, osmotic potential becomes lower in the guard cells. Consequently, water enters into the guard cells by osmotic diffusion from the surrounding cells. Guard cells become turgid and stomata opens.

(Starch is apparently broken down to produce a three carbon compound called PEP; this step is promoted by blue light. The PEP then combines with CO2, producing the 4-C oxalo-acetic acid, which is converted into malic acid. Finally H ions from the malic acid leave the cell, balancing the K ions that are entering

The exchange of H+ and K+ ions is mediated through ATP and thus is an active process. ATP is generated in non-cyclic photophosphorylation in photosynthesis in the guard cells. The ATP may also come from respiration.

The accumulation of K+ in guard cells is accompanied by increase pH and organic acid (chiefly malic acid) build up. The formation of malic acid would produce protons that could operate in H+ and K+ exchange process. The remaining organic acid anions are neutralized by K+ ions in the guard cells.

The accumulation of K+ ions together with Cl- ions and anions of organic acid is sufficient enough to significantly decrease the water potential of guard cells during daylight. Increases of up to 0.5 M in K+ concentration are observed, enough to decrease the water potential by about 2.0 MPa. Consequently, water enters into them from the adjacent epidermal and mesophyll cells thereby increasing the turgor pressure and opening the stomatal pore.

Understanding stomatal opening and closing in light of potential (Ψ)

From the subsidiary cells, water enters into the guard cells (Ψ is less inside). As a result, they expand and the pore opens.

In reverse cases, when Ψ is more inside but less outside of guard cells, water goes out. The cells become placid and the stomata closes.

Solute containing ions enter into the guard cells and decreases the water potential.

To find the direction of movement of water, note the Ψw, not other potentials. 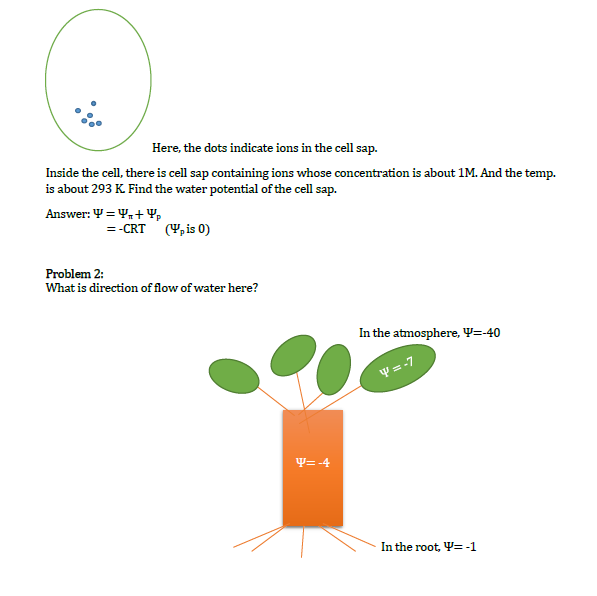 Consider water potentials in the soil-plant-water system. Under most conditions, water potential is highest in the soil and lowest in the atmosphere, with intermediate values in various parts of the plants; that is, there is a gradient from the soil, through the plant, to the atmosphere. But the components of the water potential vary. In a wet soil above the water table, Ψp = 0 and Ψs  is only slightly negative because the soil solution is dilute, so Ψ is also only slightly negative. Xylem sap is very dilute, so Ψs is only slightly negative; but the water is always virtually always under tension (Ψp is negative), so Ψ is more negative in the xylem than in the soil water, which moves into the plant from the soil. In leaf cells, which contains a more concentrated solution, Ψs is quite negative; water moves in and builds up a positive Ψp, but water is continuously evaporating from these cells, so Ψp does not increase as much as it otherwise would (that is, equilibrium is not reached), and Ψ in the cells remains more negative than in the xylem. Atmospheric Ψ is even more negative, so water tends to evaporate and move out of the leaves and into the atmosphere.

In the phloem, the following happens 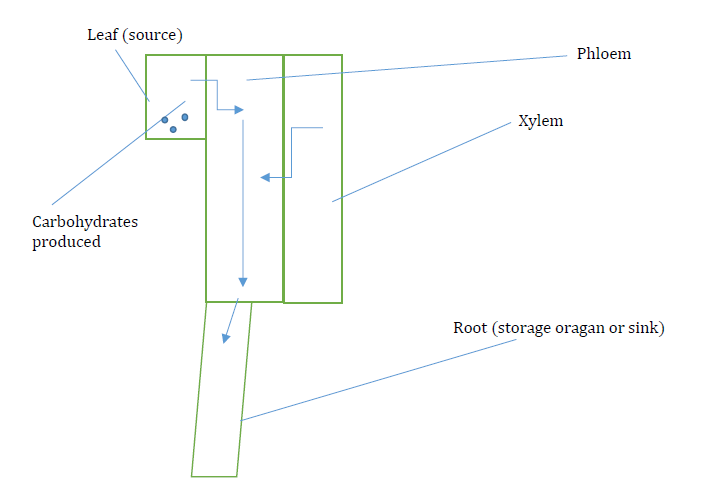 The food entering into the phloem creates a pressure at the top of the phloem.

Currently in 4th year (Hons) in the Department of Botany, University of Dhaka. Planned to have multiple careers one by one but promised to be with 'Plantlet' as long as it's primary stage remains unfinished. Email: abulaisshomrat@gmail.com. Minimum monthly resolution - Publish (1), Revise (3), Share (5)
Previous Ascent of Sap
Next An Introduction to Fungi

something different. really enjoyed a lot