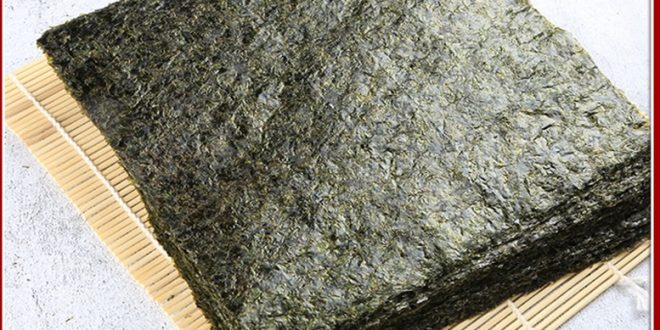 Bundles of twigs of trees such as oaks, cherry, etc. were set in rows on the ground as the collectors, to which nori spores attach themselves and grow. In the winter, grown nori plants are harvested, made into dried products similar to sheets of paper, and are sold to consumers,
mostly city dwellers.

The cultivators were mainly farmers in the coastal regions. Gradually product dealers controlled and exploited the cultivators, whose income was very low, which in turn held back the industry from rapid progress.

The nori harvest increased gradually, amounting to 1 billion sheets (a sheet is a paper like product of nori, of about 20 x 20 cm in size and about 3 g in weight) just before World War II.

Advances in the culture techniques were also poor. Old collectors (twigs from trees of oak, cherry, etc.) were replaced by bamboo twigs, promising more harvest than the old ones. Modern net collectors were found more effective to increase the harvest, but they were adopted only in limited localities because of the higher cost than the old collectors.

After World War II, nori cultivation in Japan made rapid progress. The amount of the harvest doubled in 1945, became four times in 1955, and is now six times that of the pre-war level.

At present, nori is cultivated in most bays and inland seas along the Pacific coast of Japan. Nori grounds are about 60,000 hectares in area, producing about 5-6 billion sheets of nori a year worth 70-80 billion yen.

Coastal waters of 0-5 m in depth are available for nori grounds of classic net systems, setting the nets by spreading them between two rows of bamboo poles. By the actual development of the new floating net system, cultivators have been able to turn waters 20-m deep into profitable grounds.

Usually a net, in a cultivating set, has a spread of 18.2 m x 1.3 m. Now 5 million sets are prepared for all the grounds. About 10 million nets are used per year, i.e., in a set two nets are spread one after another during a harvesting season, from November to next March or
April.

Paperlike products are gathered by unions and sold to the dealers, who preserve the products and sell them to consumers. Each Japanese eats an average of 50-60 sheets of nori per year. Nori is rich in vitamins, and two sheets of nori can supply one daily dose of them.

Seed -Present cultivation depends completely on the spores from cultured Conchocelis. The culture is done by each fisherman or by his cooperative union.

The culture begins at the end of the last season. Many cleaned oyster shells are spread on the bottom of shallow tanks filled with seawater.

Cut pieces of mature nori plants are put on the water, so that the carpospores released from the plant will attach themselves to the shells and develop to the Conchocelis phase on them.

At the end of summer, the Conchocelis matures and produces many spores which develop into nori buds.

In the fall, when the seawater temperature goes down below 24oC, fishermen prepare the cultivation. Twenty to forty nets are set in a layer in the sea. Shells with fertile Conchocelis are put into many vinyl bags, and these are hung just under the nets.

Sometimes the net layer is put into a large polyethylene bag with Conchocelis and left floating on the surface of the sea. This method prevents the cultivator from wasting spores and can also be done in deeper waters.

After several days, when the spores have fixed themselves to the nets, these nets are taken out from the bag and are tied to the poles for spore development.

In the process of separation, when the buds are 5-50 mm in length, the necessary amount of nets with buds are taken out of the water, dried and stored in refrigerators set at -20oC. Here the buds are kept alive, preparing for the recovery of crops when the planted nori suffers from a prevailing disease or a heavy storm.

Fishermen always control the level of nets as the climate and the tide changes, so that the buds do not suffer from severe drying out in low tide and also from growth of weeds and diatoms.

Rearing of nori plants and their harvest -About 50 days after budding, nori plants grow to 15-20 cm in length and then are harvested.

After the first harvest many buds remain on the nets, promising another harvest in 15-20 days. In this way harvesting can be repeated several times from a net throughout the nori season.

But generally the crop decreases in repeating harvests; sometimes the crop may die from the diseases of nori or by some accident. Then, the cultivators replace these nets with the refrigerated ones that can replace the crop in 15-30 days.

Harvesting is done by using machines which make the labor at sea more comfortable and efficient.

Manufacturing paperlike dried products from cropped nori- Cropped nori plants are cleaned by washing with seawater. Then they are chopped and spread on screens made of fine twigs of bamboo or of fine plastic rods and finally dried in a dryer with an old burner.

Drying has to be done quickly at low temperatures, commonly in 2-3 hr with the temperature lower than 50oC. In these conditions, nori is kept alive until the end of the drying procedure. This makes the product glossy, tasty, and sweet smelling, and retains all vitamins.

Currently in 4th year (Hons) in the Department of Botany, University of Dhaka. Planned to have multiple careers one by one but promised to be with 'Plantlet' as long as it's primary stage remains unfinished. Email: abulaisshomrat@gmail.com. Minimum monthly resolution - Publish (1), Revise (3), Share (5)
Previous Seaweed Cultivation & Algal Industry
Next Marine Botany: Oceans, Seas & Bay of Bengal