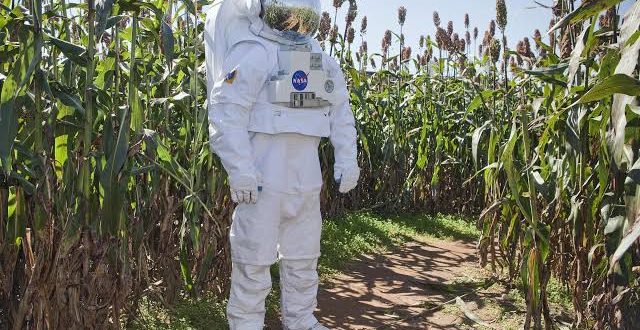 Space Farming: An Imagination Or Reality?

Plantlet Ecology, Lead Comments Off on Space Farming: An Imagination Or Reality? 360 Views

Most of us know about “Space Farming” from the movie “The Martian” where an astronaut  Mark Watney (Matt Damon), was left behind, presumed dead after a fierce storm and he survived in the red planet by growing potatoes in Mars. Here the question comes up-

“Is growing plant in Mars as easy as it seems?”

When scientists are devoting their time and resources to the development of sustaining human life beyond Earth one of the main challenges that arise is enough food supply for surviving in space where the condition is totally different from Earth.

This problem can be solved by space farming. Simply space farming refers to growing plant in outer space. But it’s not as easy as it sounds. Space farming requires greater understanding if humans are to survive in space.
Primarily NASA & other space agencies are experimenting space farming.

Space farming research usually focuses on plants that have a high yield of edible parts & can be grown in small space.Scientists have to face a lot more challenges in case of farming in space than on Earth as plants are not used to grow in space & microgravity, radiation from outer space etc can effect the growth ,even the genetic code of the plant. Here are several elements that can effect plant growth in space.

As gravity can effect root growth & other metabolic activities of plant current experiments of space farming examine different aspects of farming in Microgravity which can be helpful in related cases of farming on the surface of the Moon & Mars which have significantly lower levels of gravity than Earth.

Plants Need proper amount of lighting for Photosynthesis. Plants also need dark period for maintaining their growth & metabolic activities. But in space maintaining this balance between light & dark period is tough. To solve this problem scientists use artificial lighting. But normal light bulb produces extra heat which must be removed from space craft. So currently scientists are using LED lights as they do not produce heat.

Little or zero gravity can effect the fuction of rooting materials. In space grainy soils can cause water to scatter while fine soils can prevent air flow. So scientists are currently experimenting many possibilities including clay particles, Hydroponics, Peat moss etc.

Plants grow by using the spacecraft’s air, humidity and microgravity — conditions that are different from those on Earth. Researchers are studying whether any contaminants and dangerous organisms from space will affect those space-grown plants, making them inconsumable for humans. Changes in their genetic codes could be harmful in other ways. There’s a possibility that if astronauts bring the plants back those contaminated plants can get mixed with other plants causing an epidemic.

Spacecrafts are different than firmlands as it has very limited space to grow plants. Researchers must develop an efficient apparatus that can hold crops. Growing machines must regulate watering, humidity,lighting, air circulation and nutrients automatically.

-The main benefit and purpose of space farming is to enable long-term space exploration as it’s critical that astronauts  have a regenerative food source.

-Plants can assist the life support system in other ways too. They can be used to purify water and recycle carbon dioxide into oxygen. If grown on a large-enough scale, plants could hugely impact how spacecraft and colonies are designed.

-Though space farming is important to the space programs, the impact of space farming has many real life applications on Earth.One is a special device called Bio-KES which converts ethylene into carbon dioxide and water using ultraviolet light. Ethylene causes plants to ripen and eventually spoil. A device like Bio-KES, used in food storage units and display cases, could help increase the shelf life of produce, flowers and other perishable items. Ultraviolet light has other applications besides helping to reduce the amount of rotten food. It can also be used to kill pathogens like anthrax, help wounds heal faster and improve the effectiveness of some cancer treatments.

Besides all of these benefits space farming will increase our knowledge in Agriculture which will help us to improve crop yield & crop quality.

In a 2010 experiment aboard the ISS, it was discovered that roots of plants grow skewed like their Earthly counterparts, leading to the conclusion that gravity isn’t essential in root orientation. Plants will seek out nutrients without using gravity as a necessary cue.

In 2014, Expedition 39 installed the Veggie plant growth system, also known as Veg-01. At the same time, a control chamber was activated by researchers at the Space Station Processing Facility at NASA’s Kenedy Space Center in Florida, to shadow the procedures performed in the ISS.

The Veggie system works by placing one seed in ‘plant pillows’. These are special bags with ‘space dirt’ that controls and releases fertilizer. A plant wick is inserted and a seed is placed inside the orientation  so that the roots grow into the bag and the stem emerges up and out of the bag. Blue and Red LED lights are set for photosynthesis and give the plants a sense or directions so they keep growing upward. The walls of the Veggie chamber expand to fit the size of the growing crop.Then finally, on August 2015, astronauts ate for the first time a veggie they grew in the Veggie System, they ate leaves of a red romaine lettuce.

Most recently, with a new addition to the ISS, larger plants are able to be grown. The Advanced Plant Habitat (APH) is the largest growth chamber aboard the orbiting laboratory.The APH system is largely autonomous, managing and regulating the temperature, humidity, oxygen, and carbon dioxide levels are controlled from an Earth-based computer relaying instructions and adjustments, which will be essential for growing different types of plants.

LGH or Lunar Greenhouse is equipped as a Bioregenerative Life Support System (BLSS) through the design and construction of an innovative hydroponic plant growth chamber. Centered on using plants to sustain a continuous vegetarian diet for astronauts, a typical BLSS employs plants and crop production in addition for food, to also provide air revitalization, water recycling, and waste recycling.

Plant biologists from the University of Zurich have shown that the hormone Strigolactone supports the symbiosis between fungi and plant roots, thus encouraging plants’ growth even under the challenging conditions found in space.

Farming In The Red Planet

Earth’s soil is a mixture of minerals, organic matter, gases, liquids, and countless organisms. The Red Planet is covered with crushed volcanic rock containing nothing living. Mars does, however, have carbon dioxide, some nitrogen in the atmosphere, and frozen water.

Scientists are currently working for inoculating Rhizobia which is one of the groups of soil bacteria that infect the roots of legumes to form root nodules. After infection, it produces nodules on the roots where they fix nitrogen gas from the atmosphere and produce a more readily useful form of nitrogen.

One crop that shows great promise is soybeans. Soybeans are an important crop for Mars because of the diversity of products that can be made from them.

In photos released January 15, 2019 by the China National Space Administration (CNSA), it was revealed that an organic experiment on the Chang’e 4 lunar lander had been successful, and cotton seeds had grown buds on the surface of the Moon.

The organic biosphere experiment on board the lander consists of cotton shoots and other germinated plants, contained inside an airtight container. The cotton seeds were the first to sprout out of these plants, with rapeseed and potato seeds later following suit. Also on board the organic experiment is a small flowering plant called Arabidopsis, as well as yeast and fruit fly eggs.

Xie Genxin, the lead scientist for this project reported that the plants failed to survive past sundown on the moon. as temperatures droped down to -170°C.

Farming in space is probably one of the biggest challenges we will have to overcome if we are ever going for long term space exploration. But as our technologies are improving every day so we can hope that within next 100 years we will overcome the challenges of  Space Farming and the knowledge will serve not only space exploration but our own survival here on Earth. 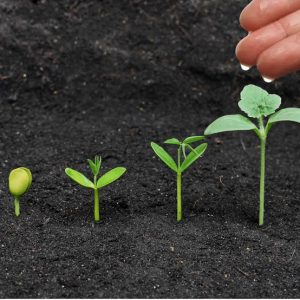 This is an official account of this website. This ID holds articles from two categories. 1. Articles from our non-authors. 2. Articles of the authors whose IDs were deleted.
Previous উদ্ভিদ নামক কারখানা
Next Thai Guava Cultivation in Bangladesh: A Silent Revolution