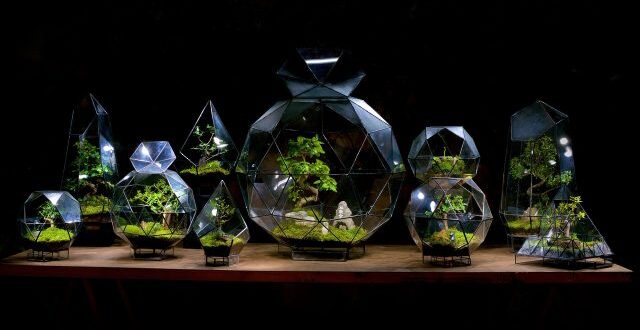 Have you ever heard of miniature but thoroughly natural garden, implanted inside a glass jar? Well, that is exactly what terrarium is- it may also be termed as a little rainforest domiciled in an enclosed jar or container made of glass. The word “Terrarium” was derived from the Latin words Terre– Land and Arium– Aquarium.

The biotic and abiotic components of a terrarium inaugurate it as a self sustaining ecosystem where carbon-cycle and water-cycle keep repeating over and over again, assisting and facilitating the small plants and other organisms inside the glass container to survive for over years.

Who brought it into light?

The discovery of terrarium was totally coincidental and inadvertent. This concept of tiny little glass garden came into being by the hands of Nathaniel Bagshaw Ward. Ward was an English doctor, botanist, horticulturist simultaneously. He had his private practice in Whitechapel, East London.

In the course of 19th century Whitechapel was swarming with numerous factories along with overcrowded housing. These altogether gave rise to extreme air pollution. Ward was trying to grow ferns in his back gardens, however the defiled air with toxic chemical substances, coal powder, ashes emitted from neighborhood industries, intruded and did not let those dainty and delicate ferns to grow. At the same time, this fervent botanist was working with moth chrysalis’s transformation into an insect inside a jar. He suddenly lit upon a small fern emerging from the substrate he laid down for chrysalis (that might have fallen down in the jar by mistake). Ward carried on with this accidental brain-child of him which finally paved the way of revelation of terrarium. The “aha moment” of Ward saw the light of success.

If you are new in this plant crafting doodah, don’t let the long list of Terrarium materials overwhelm you. You are going to find almost each material within stone’s throw. Without further Ado let’s head towards the list!

The Science behind Terrarium

Terrariums can be of two types- open and closed. The science of closed terrarium is more intriguing, even though it only repeats 3 lucid and widely known natural phenomenons.

As the jar is transparent, sunlight can easily make an entrance inside your mini forest. The sunlight and it’s heat causes the moisture of soil and plants, vaporize. The interior wall of the glass jar is comparatively cooler; which leads to the condensation of water and it pours down again onto the soil and plants, making the cycle kick off again. The soil and its substances nourish the plants and decomposed plant debris adds up to the soil nutrition again.

We have to take into consideration, terrariums are not natural occurrence despite all the processes and materials it is consisting of, is organic and natural. They sometimes need external assistance or outer interference to thrive. We may water them in every 3 months (definitely small amount). Also terrariums need to have access to bright but INDIRECT sunlight.

During the Victorian era and post Victorian era Terrariums (also was known as Wardian Case) became quite popular. But gradually it got dialed down. However, in recent years, they made a great comeback with potential commercial future along with the love of plant enthusiasts and aesthetes. This little piece of plant art doesn’t not only beautify our home interior but also (if they are open terrariums) provide us with freshly filtered air. As per Ward’s son, “Terrariums are climate within a climate, a little world within a little world”, defines this plant art immaculately.

This is Mashrifa here. I'm a life science fiend who's forever ready to learn and analyze anything concerned with the rhythm of biology.
Previous Cavitation and Embolism: Bubbles in The Stem!
Next Lower Fungi: Classification of Lower Fungi

Thank you for your tremendous help in our new project. Without your diligence,hard work, late nights,and early
mornings. we wouldn’t have been able to meet the deadline. Excellent work!<a href=”https://capitaldigitizing.com/”>embroidery digitizing</a>