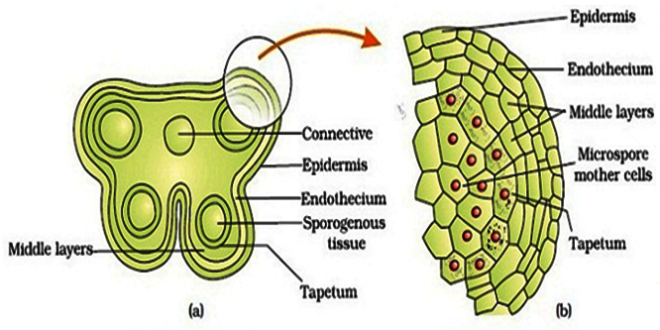 Plantlet Angiosperm, Lead Comments Off on The Microsporangium & the Male Gametophyte 8,036 Views

The sporangium that is connected with the production of microspores (pollen grains) eventually development of male gametophyte is known as microsporangium. Microsporangia are produced on stamen where each stamen has a bilobed anther (each lobe has two microsporangia), connective and anther filament. When anther produces four elongated microsporangia, the anther is said to be tetrasporangiate. 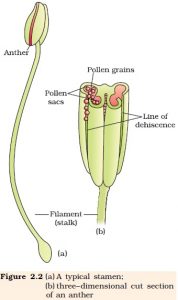 At maturity, two microsporangia of an anther lobe get joined to form a single locule so the mature anther has two locules which are known as dithecous. But there are some exceptions :

A young developing anther shows a mass of homogenous meristematic cells surrounded by a single layer epidermal cell. It soon becomes slightly four lobbed and rows of hypodermal cells become differentiated in each lobe by their larger size, radial elongation, and more conspicuous nuclei. These form the archesporium. In Boerhaavia, a single archesporial cell has been seen in each lobe of the anther and plate-like such cells are found in Ophiopogon. The archesporial cells divide periclinally and give rise a primary parietal layer toward the outside and primary sporogenous cell toward the inside. 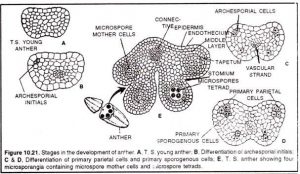 Then the primary parietal cell divide in anticlinal and periclinal manner and give rise to three to five concentric layers which are called parietal layers, they constitute anther wall. The primary sporogenous cells either function directly as spore mother cells or undergo 1 or 2 mitotic division to form a large number of cells which act as spore mother cells. During anther development, the epidermal cells undergo anticlinal divisions in order to cope up with the enlargement of anther.

The nucleus of the tapetum cell may divide in 3 ways:

1. By normal mitosis: The division takes place in ordinary ways but plate formation is absent. Two daughter nuclei which are diploid remain inside the cell. Ex: Zea mays

2. By a sticky type of division:  The chromosome behaves normally up to the early anaphase stage of mitosis. Then one or more of them fail to separate and forming chromosome bridges which persist during telophase as well as resting stage. As a result, a single dumble shaped tetraploid nucleus is formed whose middle portion is narrow or broader. Ex: Podophyllum pettatum

3. By endomitosis: When division occurs, nucleolus and nuclear membrane remain intact and spindle formation absent. The chromosomes contract and split longitudinally. The nuclei of the cell polyploid or tetraploid and no daughter cell formation occur. Ex: Spinacia oleracea

* In Lactusa sativa the tapetum cell remain in different form like diploid, triploid or tetraploid.

On the basis of its behavior, the tapetum of an angiosperm is two types:

Amoeboid/ Invasive/ Periplamodial:  t is characterized by early breakdown of their cells. When spore mother cells are at meiotic stage, tapetum cells secret some hydrolytic enzymes which disintegrate inner tangential walls of tapetum. The protoplast masses move into the sporangium cavity and fuse to form some sort of sticky substances which is known as periplasmodiam and shows periplasmodial or amoeboid movement. Ex: Tradescantia.

2. Secretory/Glandular/Parietal:  In this type, tapetum cells secret nourishing substance and nourish the developing pollen grains without early breakage. This type of tapetum is found most of the angiosperm. Sometimes vesicle-like or spherical-like structural bodies are found which is known as “Ubisch bodies”.                              Ex:Mirabilis jalapa

The function of tapetum:

1. Gives nourishment to the developing microspores.

3. Plays a significant role in the development of pollen grains.

4. Amoeboid type of tapetum is responsible for producing the callase enzyme, which causes degradation of callose wall of microspore tetrad.

5. Biologically significant different proteins are present in pollen wall which are primarily supplied through tapetum.

Microspore tetrad has a different arrangement. They are:

There are some abnormal arrangements found in microspore tetrad like:

* In some species, the microspore tetrad remain all together to form ” compound pollen grains “. Ex: Drosera

* In Orchidaceae and Asclepiadaceae,  all sporangium remain together to form a single mass called the “pollinium”.

Microspores are released by the rupture of another wall which is of 4 types:

The development of male gametophyte is uniform in angiosperms. The microspore is the first cell of the gametophyte generation. 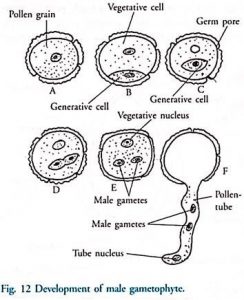 Vegetative cell: larger in size and occupies major part of the microspore. Protein and RNA synthesis is high and storage product is also high, denser cytoplasm, metabolically active and supplies metabolite to the generative cell through the cytoplasmic connection.

Generative cell: Smaller size in the beginning and spherical in shape. Later after development, this shape changes to vermiform shape, hyaline cytoplasm, and storage product are less than a vegetative cell.

* But in Cuscuta, Ottelia generative cell is larger and cover mostly the microspore.

An unusual type of pollen development:

In Cyperaceae members, only one microspore out of four microspores tetrad develops functional while the other three are nonfunctional and pushed towards the mother cell. The functional nucleus that lies in center divides into two and form the generative and vegetative cell.

De Mol ( 1923 ) observed this “Nemec phenomenon” in the anthers of other varieties of Hyacinthus orientalis but he stated that the abnormalities arose due to the division of the generative nucleus rather than the vegetative nucleus. Stow ( 1930, 1934 ) found similar embryo sac like pollen grains in the anther of a variety called ” La Victor “.

He stated that neither the vegetative nor the generative nucleus divide. Here, the microspores increase in size to form large sac-like bodies after which the nucleus undergoes three successive divisions to form 8 daughter nuclei. Three like at the end where exine is still intact, 3 opposite pole and 2 in the middle. Since the three cells at the exine remain healthy than the opposite end.

This is an official account of this website. This ID holds articles from two categories. 1. Articles from our non-authors. 2. Articles of the authors whose IDs were deleted.
Previous Programmed Cell Death
Next The Best Medical Cannabis Dispensaries in Toronto