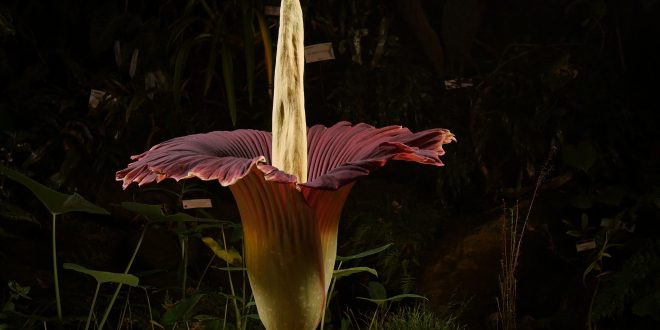 When it comes to something about flowers, we can automatically feel a nice aroma around us. Because the flowers contain such nice fragrances that flutter our hearts. But what if there is a flower from which you can sense ‘Death’? Isn’t it really horrible to feel a deadly smell from a flower? Well, a gigantic flower named Titan arum is known as the carrion flower or the corpse flower.

Not being a real corpse, this flower can make you sense rotten dead bodies by its odor, that is why Titan arum is characterized by the corpse plant. In Indonesia, it is called bunga bangkai, here bunga means flower and bangkai means corpse, cadaver or carrion. This flower is native to western Sumatra, Indonesia, and grows openly in the rainforest on the limestone hills.

Amorphophallus titanum or Titan arum is a flowering plant. It has the largest unbranched inflorescence in the world. Here is a tip, the Talipot Palm, Corypha umbraculifera, has a larger inflorescence, but it is branched. Amorphophallus titanum is a Greek name. Ancient Greek word Amorphos means without form or misshapen, Phallos- Phallus and Titan means giant. This name is not so popular as Titan arum. W.H. Hodge first coined the name ‘Titan arum’. Apart from Sumatra, many botanical gardens cultivate this plant and it has some private collectors too.

The inflorescence of Titan arum can reach over 3 meters (10 ft.) in height. The spathe (a large sheathing bract enclosing the flower cluster) is deep green on the outside and dark burgundy red inside with a deeply furrowed texture. The spadix (a spike of minute flowers closely arranged around a fleshy axis and typically enclosed in a spathe) is hollow & resembles a large baguette (a long, narrow French loaf).


In the bottom, the spadix bears 2 rings of small flowers. We can not see them from outside. Because the sheath of the spathe keeps them covered. The upper ring bears the male flower and the lower ring contains red-orange carpels. Both the male and female flowers grow in the same inflorescence. But the male flower opens a day or two days after the female. This usually happens to prevent self-pollination.  Each year, the old leaf dies and a new one grows in its place. Here is a picture to simply understand the life cycle.

Why the Corpse Flower?

The fragrance of Titan arum is just like rotten meat. It attracts the carrion-eating beetles and flesh flies. They are the pollinators of this flower. The deep red color and texture of the inflorescence create an illusion that the spathe is a piece of meat. When the spathe gradually opens, the spadix spreads a powerful odor to attract the pollinators who lay eggs on rotten flesh. The odor-spreading process starts in the late evening and goes on till midnight. This is the active time for pollinator insects and beetles. The odor tapers off towards morning.

Titan arum does not produce fruits regularly. In fact, the flower takes about 7-9 years to bloom. It produces a fruit head of vibrant orange berries after successful pollination. Scientists say that these berries are potentially deadly to humans.

Any Chance of Benefits?

Yes! There is a swollen underground storage stem (Tuber) of Titan arum. It can weigh more than 75 kg. Researchers around the world are trying to derive protein from this tuber. They are hoping to cure African people suffering from sleeping sickness by using the extracted protein. This disease kills thousands of people every year in sub-Saharan Africa. But this research is still an ongoing project.

Studying Bachelor of Science at Department of Botany, University of Dhaka. I am a seeker for multi-talents, love to know about new things and also a nature-lover. I love clicking photographs. Graphic designing and digital content making are my newest passions. E-mail: sharmilisuzana@gmail.com. Minimum monthly resolution: Publish (2), Revise (3), Share (5).
Previous Test of Significance
Next Chernobyl, Covid-19 and Black Fungus

Well done. Just a piece of advice–It would be better if you could cite the author name like Amorphophallus titanum (Becc.) Becc. ex Arcang.
Also adding few sentences regarding molecular systematics/dna barcoding will help to look much better and informative.

Thank You for your effort.

If you need reference for molecular point of veiw, I am adding a link here: https://www.boldsystems.org/index.php/Public_SearchTerms
here you will find the genes that have been used already to build DNA barcodes for this plant.

Thank you so much for these precious advices. I would surely keep those in mind.

It was a very well narrative article. Hoping to see more article from you. Best of luck 🥀🌸

Thank you so much for this encouraging comment. Hoping to publish quality contents more and more.