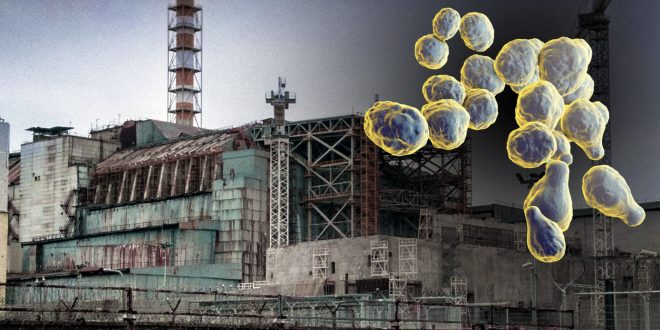 In the year 1986, a horrifying incident took place. It killed many instantly (who were very close to the nuclear reactor). As well as kept on affecting several many living beings including plants, wild and domestic animals. The extreme radioactive environment affected the people whoever was still living in that area. (mainly by cancer and other mutational abnormalities). We know it as Chernobyl nuclear disaster. But only after five years of this disaster, people discovered a form of life inside the reactor itself. Not only it was bearing the extreme radiation but also it was living there happily with a great smile. It was feeding on the radiation itself making a safe & radiation-free environment for lives to reincarnate. Shocked by the presence of life, scientists studied the strains and found ways of mind-blowing applications of its radiation-munching and blocking ability.

Chernobyl Nuclear Disaster took place in 1986. In 1991, only after five years, scientists discovered a fungus known as Cryptococcus neoformans growing in the wreckage. This fungus was not a new species. Humans knew about this particular strain since the late 1800s. As it had caused some nasty infections in the human body by then. Till now, scientists have documented around 200 species of 98 genera of fungi living around the ruins of the former nuclear power plant. Some of them are- Cladosporium sphaerospermum, Cryptococcus neoformans, Wangiella dermatitidis.


How they withstand radiation

These fungi have the ability to withstand ionizing radiation approximately 500 times higher than background levels. They happen to grow even faster in the radiation’s presence than normal environment. Studies have noted, the fungi point their spores and hyphae towards the source of radiation. As if it is reaching out for food. It also has the ability to heal and multiply itself. These radiation-eating fungi are commonly known as “Black fungi” or radiotrophic fungi.

Why the name “Black Fungi”?

The name “Black fungi” was given because of the presence of high melanin in their hyphae. (the same pigment in human skin that gives protection from ultraviolet radiation.) The presence of a high level of melanin gives these fungi a darker complexion. Their darker complexion was the main reason behind their naming. Melanin allows them to convert gamma radiation into chemical energy for growth. The same way plants convert carbon dioxide and chlorophyll to oxygen and glucose via photosynthesis. This is only a darker version of photosynthesis termed ‘Radiosynthesis’. Melanin also shields them from harmful radiation. Studies found that the fungi collected at the accident site had more melanin than the fungi collected from outside the exclusion zone. This indicates that the fungus had adapted to the radiation activity. Scientists hope to use the fungi’s ability to help people who are routinely exposed to radiation.

Experiments of Black Fungi in Space

To understand how the fungi cope with the space environment full of cosmic radiation, a SpaceX rocket traveled to the International Space Station carrying eight species of fungi from the Chernobyl reactor in 2016. How the weightless environment and cosmic radiation affect the growth of the funguses was the main purpose of this experiment. Again from December 2018 to January 2019 another experiment took place. The objective was to test whether the use of radiotrophic fungi could aid in protection against cosmic radiation. This was a part of research efforts for a possible trip to Mars.

This experiment used the fungi Cladosporium sphaerospermum. After 30 days of study, scientists found very auspicious results. The amount of radiation was significantly reduced. With a 1.7 mm thick melanized radiotrophic Cladosporium sphaerospermum, the radiation was found to be 2.42% lower at the end of the trial. The radiation deflected was five times more than the situation where no radiotrophic fungus was used. Under circumstances where the fungi will fully cover an entity, the deflection rate is estimated to be 4.34±0.7%. Estimation says that a 21cm thick layer could deflect a significant amount of annual radiation received on Mar’s surface.

On earth, black fungi can be a tool to make a radiation-exposed environment free from radiation. As a result,  that environment could be made habitable again. Through recombinant DNA technology, if scientists can extract the melanin from black fungi, they can make sunscreen. Then, that would be very effective in protecting us from harmful UV radiation. In space, radiotrophic fungi could work as a shield to protect astronauts from cosmic radiation. Besides, years of experiments say that black fungi are the only living entity that can grow in space and feed on cosmic radiation. Thus, scientists are thinking about how they can be used as a food source for astronauts.

Black Fungi as a Pathogen

Despite the usefulness of these radiotrophic fungi, they can cause some serious health problems. Infections with these fungi are rare in people with a fully functional immune system. But people with a lower immune system like AIDS patients and Covid-19 patients are at great risk. Right now the whole world is in a pandemic and people are dying in millennials. Moreover, these mischievous fungi made the scenario even worse as if it was not enough. Because of their opportunistic behavior, these fungi are called “opportunistic pathogens”.

They usually create an infection in the lungs. In severe cases, can also cause fungal meningitis and encephalitis in people with a very low immune system. Some species of them can survive intracellularly in macrophages. Macrophage is the main cell among white blood cells to kill invading pathogens. As a result, this causes resistance to the eradication of fungal pathogens by antifungal components. Thus, failing to identify the fungus, antibiotics don’t work and death becomes inevitable.

Lastly, we can say that the radiotrophic fungi/black fungi have great potential. They have the power to save us from harmful radiation. They can be our savior during space travel. And, we can’t deny that they are one of the hopes that will enable us to colonize Mars one day. Still, it has proven to be a great threat in this pandemic by giving the death rate a boost.

Studies on US National Library of Medicine

I'm a student of department of botany at University of Dhaka. I'm learning a lot of new interesting things about different spheres of botany and I'll keep updating about them to keep your knowledge of nature enriched. Email: tarannum28@gmail.com Minimum monthly resolution: Publish(3), Revise(2), Share(5)
Previous Titan Arum: The Corpse Flower Feels Rotten
Next Ribosome: The Protein Factory of Cell

Is it possible to write a bit more detail about Radiosynthesis?

Thanks for sharing such interesting facts in brief. Will love to have much more detailed articles in future. Reading it was confortable enough though hadn’t much idea before. Thank you..

I really put a lot of effort into this. I am glad you liked it.