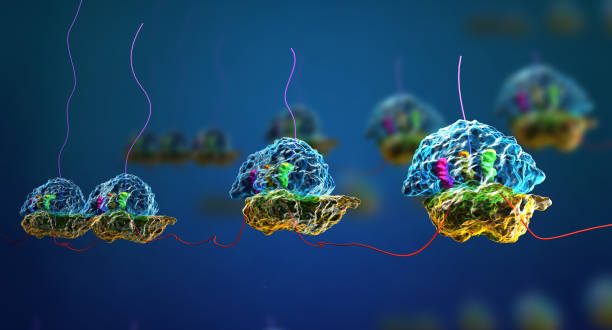 Ribosome: The Protein Factory of Cell

When we observe a living cell, we can see a variety of living bodies of definite structures and functions suspended in the cytoplasm, known as organoids or organelles. These organelles are the main sites for various cytoplasmic activities. Some of these are concerned with the chemical activities or metabolism of the cytoplasm. The ribosome is one of them. Ribosomes are particles composed of ribonucleic acid (RNA) and proteins. These particles are an integral part of the rough endoplasmic reticulum and microsomes. But they also exist freely in the cytoplasm, e.g. in young meristematic cells.

Ribosomes are often attached in rows or clusters. These clusters or strings of ribosomes are called polyribosomes or polysomes. They consist of ribosomes that are very active in protein synthesis and are held together by a string of messenger RNA (mRNA).

Swedish biochemist Svedberg observed that after keeping ribosomes in less concentration of Mg (0.001M) solution if it is centrifuged then the ribosomes are sedimented. The sedimentation rate is constant for similar types of ribosomes and it is called as “Svedberg constant” or “S-value”.

Based on S-value, ribosomes are two types:

Each ribosome consists of two subunits: a smaller sub-unit and a larger sub-unit. Both subunits are composed of long strands of RNA.

70S ribosome particles split into 50S larger subunit and 30S smaller sub-units. Actually, these two sub-units occur freely in bacteria cytoplasm and unite only during protein synthesis. Similarly, 80S particles split into 60S and 40S subunits. The 40S sub-unit occurs above the 60S subunit forming a cap-like structure. The 60S subunit is dome-shaped and attaches to the membranes of canaliculae in fixed ribosomes.

D. Watson (1958) isolated ribosome and analyzed from E. coli. He observed that there are two main components:

Ribosomes are the protein factories of cell. The one & only function of them is to synthesize protein by the process of Translation.

Attached Ribosomes: Attached to the endoplasmic reticulum and other organelles.

very informative article indeed. If possible please do add some more functions of ribosome like it can cause extrachromosomal disorder in organisms and anything you find new.

Thank you so much for your feedback. I’ll try to find and add some more information regarding this part.

Very much informative and impressive💙. Thanks for the infos.

Thanks for your appreciation.