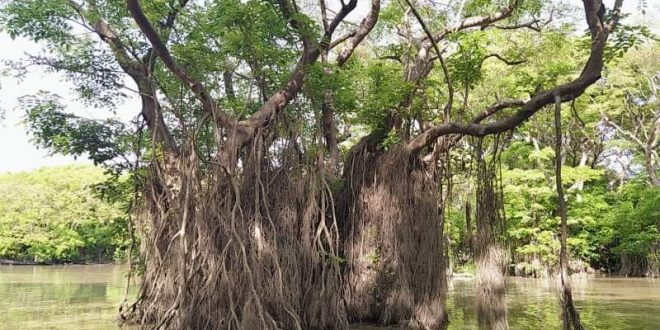 Plants that survive in the saline condition are known as halophytes.

Since halophytes can not easily absorb water, they develop almost all important xerophytic devices for optimum use of water.

Majority of halophytes in the tropical and subtropical regions are shrubs (dome-shaped), but a few of them are herbaceous     e.g.    Acanthus ilicifolius.

Some halophytes develop succulence in stem. Some studies say that succulence is directly correlated with salt tolerance of plants.

d) Fruits, Seeds and their dispersal:

Halophytes or mangrove plants growing in the tidal marshes show ‘vivipary’ which is defined as the germination of seeds while the fruits are still attached to mother plants (e.g. Rhizophora sp.,  Aegiceras sp. , Avicennia sp.)

2. High elasticity of the cell walls.

(i) Presence of thick cuticle on the aerial parts of the plant body. The epidermis is characterized by a cover of waxy layers in addition to thick cuticle.

(ii) They develop protected stomata which are not deeply sunken. The palisade consists of several layers with intercalated tannin and oil cells.

(iii) The leaves and stems are abundantly covered with various types of simple and branched trichomes.