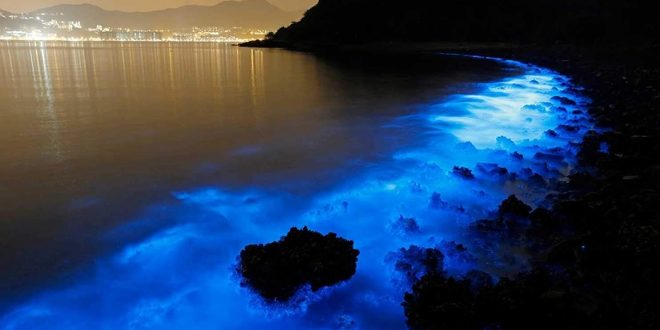 Bioluminescence: The Secret of Glow in The Dark Sea

It’s dark all around and you are walking by the sea with a sparkling blue wave touching your feet .isn’t it so much mesmeric ? As much The moment  is fascinating ,the reason behind this beautiful glow is much more overwhelming.

This is a beautiful natural phenomenon caused by life form  living in the sea which is scientifically called Bioluminescence.

The word Bioluminescence is the combination of two words bio and luminesence. Bio means “life ” &  luminescence means ” cold emission of light by a substance”.So Bioluminescence is  a phenomenon of production and emission of light from a living organism as a result of biochemical reaction.  Light is must for every living form. Some certain living organisms use light originated by themselves , the same way people use flashlight .But these organisms produced light very differently  from the way bulbs do.Bulb creates light through incandescence (a filament inside the bulb emit light after being heated up).On the other hand , living form  create light by non generating heat rather than by a biochemical reaction within the cell, called luminescence or cold light .

Reason behind the light emission

Luciferin and Luciferase , words are a generic form rather than a name of particular chemical ,came from Latin word Lucifer means “light bringer”. Lots of different substances act like luciferin ,since different organisms use different substance and pathway of the reaction.It is quite difficult to know about almost all the chemical and reaction pathway ,as about 90% of Marine bioluminescent species posses a distinct way and this feature is so much sensitive that it readily gets damaged when the organisms get captured or died .

Why only blue or green light

Sea water absorbs red ,orange & yellow sunlight and scatters violent light . But in The twilight zone (poorly lit zone about 660-3300 feet from sea surface)only bluish green portion of sunlight is reached. This is partly because blue -green light has a short wavelength and more energy to enter into the dark sea water.

Life form live throughout the ocean depth,but most glowing animals exists at twilight zone like jellyfish, squid, shrimp,krill,marine worms,fishes etc make light of wavelength of 440-479 nm which gets blend with light in twilight zone.

All Luminous bacteria are of marine form widely distributed throughout the ocean of the world . Many bioluminescent bacteria live as a symbiont in the light organ of fishes (eg: Flashlight fish).Since a bacterium is not visible without microscope ,the light of an individual bacterium can not be seen in naked eye as well.Agar culture containing billion of bacterium is readily visible of bluish light of bacteria. For example: most common bacterium are   Vibrio fischeri  & Photobacterium phosphoreum.

Single celled planktonic algae known as dinoflagellates are the most common in glowing sea shore at night.Almost 18 genera of dinoflagellates exhibit luminosity. They store energy from sun light  at day  to produce glow at night.These organism glow when get  stimulated mechanically such as by the flow of current in the sea shore, or by the pressure of foot ,or any type of stress.These algae remaining in the surface of the sea by phosphorescence create a sparkling blue waves at night.

There are about 80 species of bioluminescent fungi and about 100 species of bioluminescent mushroom. Light of fungal glow ranges from blue and green to yellow. Small whitish luminous fungi (foxfire) commonly grow on dead wood. At night it glows ghostly green known as ghost fungi eg: Omphalotus nidiformis of Australia and Omphalotus olearious of USA.The luciferin-luciferase pathway has not been characterized in fungi ,rather than a biochemical reaction of two enzymatic steps called caffeic acid is found .It is thought that the fungal glow attracts insects resulting the dispersion of fungal spores .

About 14 major fish clades group of fishes from common ancestor have evolved Bioluminescence independently.Deep sea fishes create light for  detecting and hunting prey, and also for the way of signalling between fishes. For example Angler fish,Hatchet fish ,Lantern fish are most common deep sea luminous fish.

Frequently found luminous insect is firefly.A flock of  glowing  firefly create a beautiful environment lighting the darkness  at night. They have glowing abdominal segments .But there are other groups of bug which glows. They glow in order to communicate ,find mates,scare off predators.For example : Click beetles, Railroad worms,Longhorn beetles etc.

Imagine you are reading books in dark without switching on lamp, rather than by the light of a plant on your desk.How amazing that would be right! The team of MIT engineers are working to making the dream a reality.They have introduced a method for turning plant leaves into a source of light by injecting light emitting bioluminous nanoparticle into  the leaves. 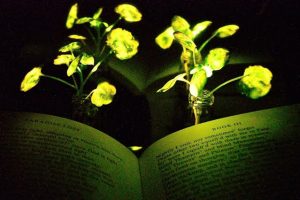 “Currently, researchers are able to make plants such as spinach,kale and watercress emit a dim light for about 4 hours up from 45 minutes when the project began in 2015″

This is an official account of this website. This ID holds articles from two categories. 1. Articles from our non-authors. 2. Articles of the authors whose IDs were deleted.
Previous অপ্রত্যাশিত অতিথি
Next Dendrochronology: An Age Teller of Trees