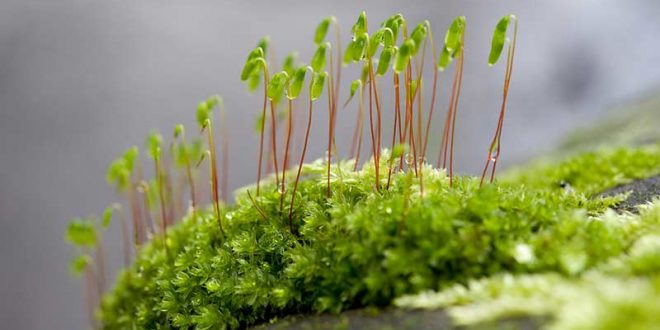 Sporophytes of moss containing capsules are attached with the green mass of gametophytic body.

Bryophyta is a division of non-flowering plants or embryophytes (land plants) characterized by rhizoids rather than true roots and having little or no organized vascular tissue and showing distinct alternation of generations: gamete bearing forms and spore bearing forms.

Like all land plants (embryophytes), bryophytes have life cycle with alternation of generations. A haploid gametophyte, each of whose cells contains a fixed number of unpaired chromosomes, give rise to a diploid sporophyte, each of whose cells contains twice the number of unpaired chromosomes. Gametophytes produced haploid sperm and eggs which fuse to form diploid zygotes that grow into sporophytes. Sporophytes produce haploid spores by meiosis,that grow into gametophytes.

Bryophytes are gametophyte dominant, meaning that the more prominent, longer-lived plant is the plant which is haploid or gametophytic. The diploid sporophytes appear only occasionally and remain attached to and nutritionally dependent on the gametophyte. In bryophytes, the sporophytes are always unbranched and produce a single sporangium (spore producing capsule).

According to Campbell, Smith, Takhtajan and others bryophyta has been divided into three classes- Hepaticae, Anthocerotae and Musci.

The bryophytes are worldwide in distribution and are in to be found in practically all places in which  plants can live, except possibly in the sea. They are as much at home in the moist mountain forests of tropics and subtropics as  in the Arctic tundra. The great majority of the bryophytes are damp loving essentially terrestrial plants and their favourite  habitats are shaded ground, moist rocks, bases of trees or similar moist places. A few are aquatic plants.

Staying in 1st year (hons) in the Department of Botany, University of Dhaka. From childhood I love natural beauty. And my curious mind wants to know the magical worlds of plants. So I want to do something to this place. E-mail: mostalponaakter19@gmail.com Minimum monthly resolution: Publish(1), revise(1),share(1)
Previous পরীক্ষার আগের রাতে পড়ার ট্রেন্ড
Next Plant Diversity : While The Environment Is Aquatic