A domain is the highest taxonomic level of species in biology. In 1977, Woese and his coworkers developed the groundbreaking three-domain system.  They proposed this classification based on differences in the sequences of nucleotides in the cell’s ribosomal RNAs (known as 16S rRNA). They created the first worldwide tree of biological life by comparing 16S rRNA nucleotide sequences. Similarities and differences in rRNA nucleotide sequences reveal how closely or distantly related different cells and organisms are. 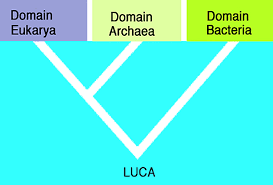 LUCA and the tree of life

This classification based on 16s rRNA provided the most robust possible support for Darwin’s common ancestry concept. Hence, it became the fact that all cells came from a common ancestor cell termed “The last universal common ancestor” (LUCA). We still know little about how LUCA used to live and look like. Before Woese, scientists believed there were only two types of life: eukarya and prokarya.

Why Archaea and Eukarya are together

Woese believed the archaea and the bacteria are molecularly distinct, despite their similarities. Hence, it should form its separate domains on the evolutionary tree. Strikingly, evolutionary biologists placed the LUCA between bacteria on one side and archaea and eukarya as sister lineages on the other side. They proposed that the domains Archaea and Eukarya emerged from a common archaeal-eukaryotic ancestor that emerged from a member of the domain Bacteria. So, we can say, in the beginning, the tree of life had only two branches: Archaea and Bacteria.

Why Bacteria and Eukarya are not together

Archaea were once regarded to be the most primitive prokaryotic group. On the other hand, bacteria were assumed to be closer to eukaryotes. Studies of rRNA indicate that it is not the case. Instead, archaea seem to be related to eukaryotes more closely than bacteria. Archaea resembles bacteria in their apparatus for metabolism and energy conversion. But in the case of molecular level and methods of handling the genetic information (replication, transcription, translation), archaea resembles the eukaryotes more closely than bacteria. This finding emphasizes that the similarity of cellular organisms and common ancestry are two different things.

Archaea is a group of single-celled prokaryotic organisms that have distinct molecular characteristics than bacteria. Archaea comes from the Greek word archaios, meaning “ancient” or “primitive”.  Some archaea indeed exhibit characteristics worthy of that name. The best-known archaea are species that live in highly inhospitable environments. They are referred to as “extremophiles”. Archaea are often found inhabiting environments that we humans avoid. Such as bogs, sewage treatment plants, ocean depths, salt brines, and hot acid springs. However, they are widely spread in less extreme and more homely environments, from soils and lakes to the stomachs of cattle.

Domain Archaea include some major groups-

Bacteria are microscopic organisms with only one cell. Their cellular structure is simpler than other organisms. Bacteria lack a nucleus or membrane-bound organelles. Instead, a single DNA loop stores its genetic code. A plasmid is an additional circular genetic material found in some bacteria. The plasmid often contains genes that give the bacteria an edge over others. It could, for example, contain a gene that makes the bacteria resistant to a certain drug. Bacterial cells come in a variety of forms. Bacteria are classified into five groups according to their basic shapes: spherical (cocci), rod (bacilli), spiral (spirilla), comma (vibrios), or corkscrew (spirochaetes). They can exist as single cells, in pairs, chains, or clusters.

Bacteria can be found in almost any environment on earth. From the permanent ice shelf of the Antarctic to the driest African deserts. Even to the internal confines of plants and animals. Some organisms, such as plants, animals and humans, live in or on other organisms. Bacteria have even been detected in rock layers situated several kilometres beneath the earth’s surface. In the human body, there are approximately ten times as many bacterial cells as human cells. Bacteria exist in the soil or on decaying plant debris, where they play an essential role in cycling nutrients. Some species degrade food and harm crops, while others are essential in the production of fermented foods such as yoghurt and soy sauce. Only a small percentage of bacteria are parasites or pathogens that infect animals and plants.

The most complex bacteria are cyanobacteria. Cyanobacteria contain elaborate arrays of the cytoplasmic membrane. The membrane serves as the site of photosynthesis. The membranes of the cyanobacteria are very similar to the photosynthetic membranes present within the chloroplast of plant cells. Like eukaryotic plants, they can produce oxygen by splitting water. Many cyanobacteria are also capable of nitrogen fixation. They can convert nitrogen gas into a reduced form of nitrogen, such as ammonia. Cells then use this reduced nitrogen to synthesize nitrogen-containing organic compounds, for instance, amino acids and nucleotides. Those species capable of both photosynthesis and nitrogen fixation can survive on the barest of resources. Examples of cyanobacteria: Nostoc, Oscillatoria, Spirulina, Microcystis, Anabaena, etc.

These are branching filamentous bacteria. They are termed “actinomycetes”( “actis” meaning ray and “mykes” meaning fungus) because they resemble the radiating rays of the sun when seen in tissue lesions.

Read more about the classification of bacteria

This domain includes all animals, plants and fungi. Humans are eukaryotes, as are falcons, chimpanzees, hydras, and mushrooms. Eukarya also includes some much smaller things, for instance, yeasts, amoebas, and algae. The incredibly diverse group of species is solely linked by the fact that they have similar types of cells. All of their cells have certain features that differentiate them from the prokaryotic cells of bacteria and archaea. Eukaryotic cells perhaps contain the most complex external and internal structures and the physiological and reproductive processes. Among all domains in the biological world, members of the domain Eukarya have the most significant body size and body mass. There are some single-celled eukaryotes, such as several protists and fungi. Others are multicellular. Examples of eukaryotes: Animals, Fungus, Protozoa, Plant, Dinosaur, Diatom, Ciliate, Brown algae, etc.

Microbial genes are now known to transfer not only vertically from a parent organism to its progeny, but also horizontally to its distant cousins, such as other species and other genera. As a result, the old three-branched “tree of life” model has evolved into a “net of life.”

A curious girl with many questions.Want to discover life in a different way. And lastly, "Miles to go before I sleep." Author's email: armanyarju2001@gmail.com Minimum Monthly Resolution: Publish(1), Revise(1), Share(2).
Previous Cytoplasmic Inheritance: Transfer of Genetic Characters by Means of Autonomous Organelles
Next Primitive Characters of Cycas and Advanced features of Gnetum

Nice article I would say, though I have only read the Archaea part.

It would’ve been better if you had added one or two examples in each group of the Archaean types. TIA

Regards. Yeah, I’ve added examples of every domain. Hope this will be emphasized more.