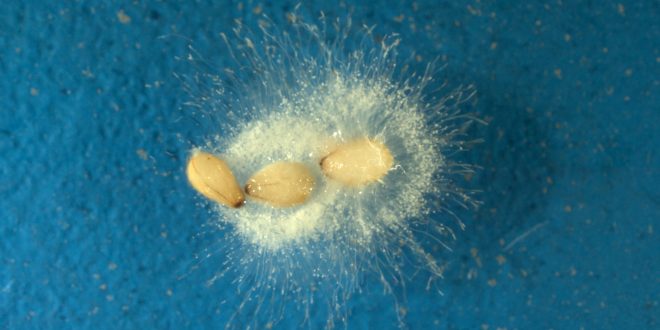 The oomycetes, also known as “water molds”, are a group of several hundred organisms that include some of the most devastating plant pathogens.  The diseases they cause include seedling blights, damping-off, root rots, foliar blights and downy mildews. Some notable diseases are the late blight of potato, downy mildew of grape vine, sudden oak death, and root and stem rot of soybean.  Because of their filamentous growth habit, nutrition by absorption, and reproduction via spores, oomycetes were long regarded by plant pathologists as lower fungi.  However, as our understanding of evolutionary relationships has grown, it is now clear that this group of organisms is unrelated to the true fungi.  Indeed, fungi appear more closely related to animals than to oomycetes, and oomycetes are more closely related to algae and to green plants.

• They are both unicellular-holocarpic and eucarpic – filamentous species composed of profusely branched, coenocytic hyphae.
• Cell wall predominantly composed of β – 1, 3 & β – 1, 6- glucans and cellulose rather than chitin.

• Asexual reproduction by means of heterokont biflagellate zoospores (heterokont refers to the characteristic form of cells, which typically have two unequal flagella.) with a larger tinsel flagellum forward directed and a shorter whiplash flagellum directed backward.
• Zoospores produce within the sporangia that may vary from little more than swollen, lobed portion of hypha to spherical, oval or lemon shaped structures.
• Two morphologically distinct biflagellate zoospores are produced in the Oomycetes.
A. primary zoospores – pear shaped (pyriform) with the flagella attached at the anterior end of the spore. These spores are poor swimmers and primitive one.
B. secondary zoospores – kidney or bean shaped (reniform) structure with flagella inserted laterally in a groove on the spore surface.

• Heterogametangic or oogamous (two heterogametangia come in contact and the contents of one flow into the other through a pore or tube) type of sexual reproduction.
• Gametangia typically differentiated into small hyphal-like male structures called antheridia and larger, globose female structures called oogonia.
• Antheridia and oogonia may produce same thallus or different thalli.
• Following meiosis one or more non-motile eggs or oospheres develop within each oogonium and haploid nuclei also produces within the antheridium.
• Developing antheridia are attracted to oogonia by hormones and give rise to fertilization tube.
• A haploid nucleus of antheridium is introduced into the oosphere via the fertilization tube and fuses with the nucleus of the oosphere.
• Following fertilization an oosphere develops into an oospore that matures in the oogonium.
• Oospores are thick-walled, resistant structures capable of surviving unfavorable environmental conditions.
• Upon germination an oospore gives rise to a diploid thallus.

1. Mostly aquatic, some are terrestrial.
2. Vegetative thallus filamentous, coenocytic, in some groups unicellular (example – Olpidiopsis).
3. Cell wall made up of glucans and cellulose lacking chitin (except for a few taxa).
4. Asexual reproduction by means of biflagellate zoospores (larger forward directed tinsel and shorter backward directed whiplash type of flagella).
5. Sexual reproduction is oogamous (by oogonia and antheridia) and produce oospores.

• They are aquatic fungi, so they are called as water mold.
• A few species occur abundantly in moist soil.
• Play an important ecological role in decomposition and recycling of materials in the aquatic ecosystem.
• Saprobic on both dead plants and animals. A few species parasite on fish such as Saprolegnia.

• Thallus body is eucarpic.
• It is a profusely branched, coenocytic mycelium.
• Septa are formed in the mycelium just below the reproductive organs. 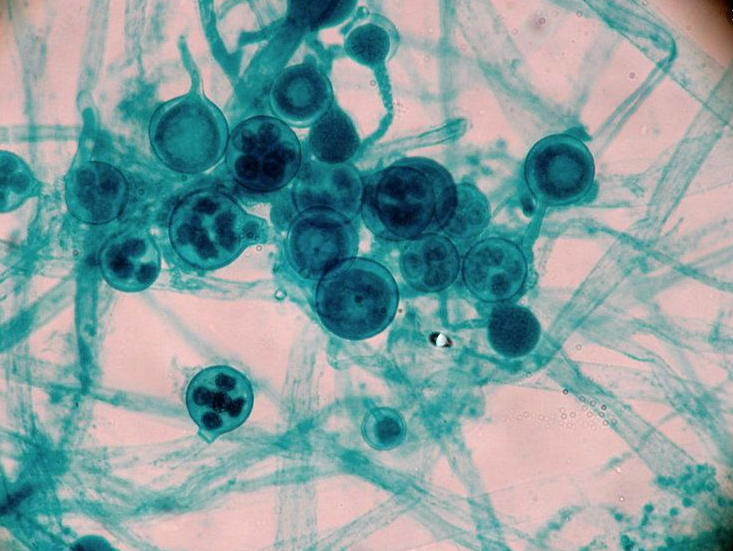 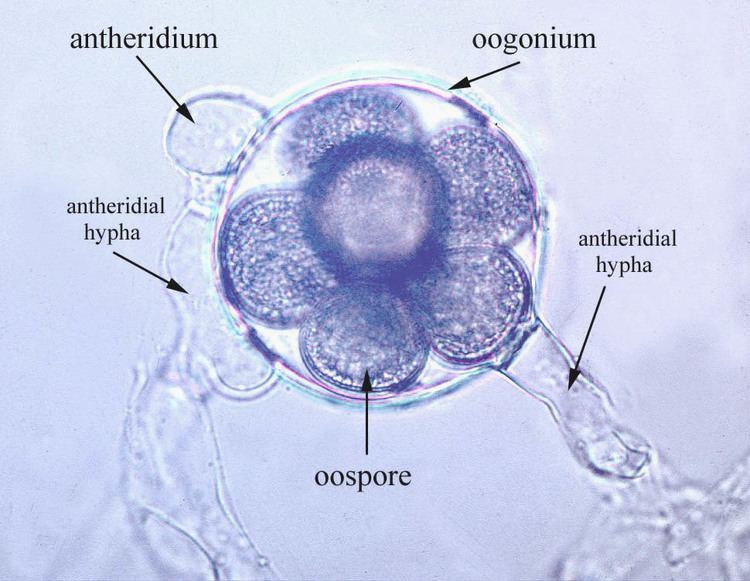 When the contents of spore of a sporangium has released, another or secondary sporangium is initiated at the basal septum and grows through the first sporangium, maturing within it or beyond it. (page: 697, Alexopoulos)

As a general rule sporangia of Saprolegniales organisms remain attached to the somatic hyphae after spore release. Primary zoospores and secondary zoospores are produced.

Different species on the basis of zoospores types

Different species on the basis of zoospores behaviour

01. Gametangial contact or Oogamous (two heterogametangia come in contact and the contents of one flow into the other through a pore or tube) type of sexual reproduction.
02. The sex organ generally terminal.
03. Antheridia or gametangia may develop from the same thallus or from different thalli.
04. Gametangia typically differentiated into small hyphal-like male structures called antheridia and larger, globose female structures called oogonia.
05. Antheridia and oogonia may produce same thallus or from different thalli.
06. Following meiosis one or more non-motile eggs or oospheres develop within each oogonium.
07. Developing antheridia are attracted to oogonia by hormones and give rise to fertilization tube.
08. A haploid nucleus of antheridium resulting from meiosis is introduced into the oosphere via the fertilization tube and fuses with the nucleus of the oosphere.
09. Following fertilization an oosphere develops into an oospore that matures in the oogonium.
10. Oospores are thick-walled, resistant structures capable of surviving unfavorable environmental conditions.
11. Upon germination an oospore gives rise to a diploid thallus.

Cysts: Cysts are abnormal, closed sac-like structures within a tissue that contain a liquid, gaseous, or semisolid substance.

Encyst: To enclose or become enclosed by a cyst, thick membrane, or shell. To be enclosed within a cyst. 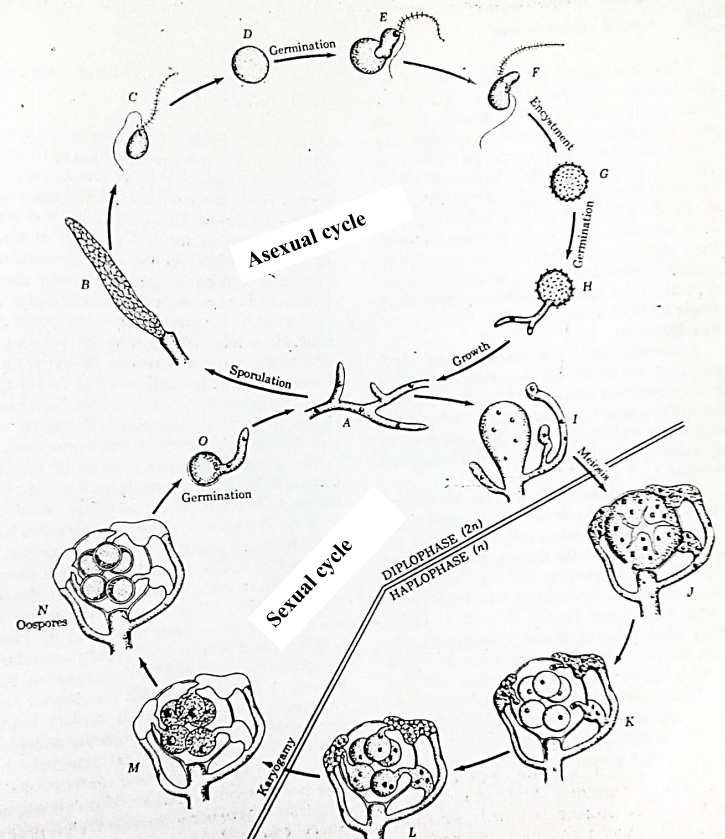 01. Under proper environmental condition asexual reproduction begins and the hyphae give rise to elongated, tapering sporangia that borne at the tips of somatic hyphae and separated from them by a septum.
02. The sporangial protoplast is divided into as many portions as there are nuclei and each portion develops into a spore.
03. In Saprolegnia, an opening develops at the tip of the sporangium and primary zoospores escape into the surrounding water.
04. They swim about for some time, come to rest and encyst.
05. After a resting period a short thin papilla develops on cyst, its tip dissolves and a protoplast emerges.
06. This protoplast develops into a kidney or reniform shaped secondary zoospore with two lateral flagella.
07. After a short period of time encystment follows.
08. In some species “boat-hook-like” hairs present on the surface of the secondary cyst.
09. Then the secondary cyst germinates by a germ tube that develops into a hypha that initiates a new colony.

01. During favorable conditions sexual reproduction begins and hyphae give rise to oogonia and atheridia.
02. Meiosis takes place in the gametangia, producing haploid oospheres in the oogonium and haploid gamete nuclei in the antheridium.
03. Oogonia are thick-walled, globose to oblong in shape, contain many oospheres and in each oosphere contain a single haploid nucleus.
04. Antheridia are much smaller than oogonia, multinucleate, elongated bodies and often borne on the same hypha that bears the oogonium and arise immediately below it.
05. Fully formed one or more antheridia attached to the oogonia.
06. Fertilization tubes originating from the antheridium penetrate the oogonial wall and reach the oospheres.
07. Antheridial nuclei now migrate from the antheridium to the oospheres through the fertilization tubes; one nucleus enters each oosphere, fuses with it and forms a diploid zygote nucleus.
08. After fertilization, a thick wall develops around each oosphere, converting it into a smooth oospore.
09. After a prolonged rest period, the oospores are liberated from the disintegrated oogonial wall.
10. Then the oospore germinates and develops into a new hypha.

A Biology maniac who is interested in fundamental research attempt to explore and explain the underlying mechanisms that govern the functioning of living matter............ E-mail: abchowdhuryy@gmail.com. Minimum monthly resolution: Publish (1), Revise(3), Share (5).
Previous Primitive Characters of Cycas and Advanced features of Gnetum
Next Types & Procedures of Selection Process (Part-1)

Update your profile. Add a clear image of yourself and write a good bio.