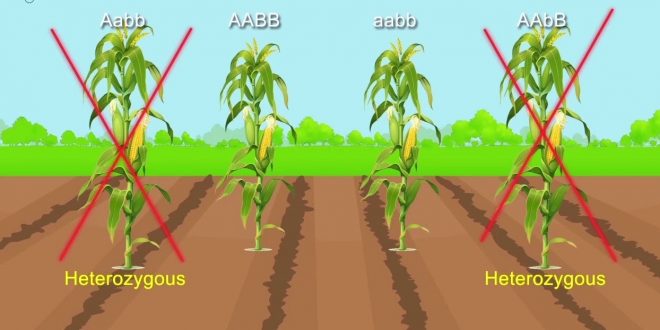 Plant improvement must have been started with the primitive man changing his mode of life from a nomad to an agriculturist. To have a crop in the next season, he had obtained seeds from the first crop. For this, unconsciously the process of selection is practiced for a long time and becomes a method of crop improvement. It is, therefore the oldest breeding method and is the basis of all crop improvements. It is the simplest and oldest breeding method.

Selection is naturally based on phenotype. It’s finally yield an improved line of variety. The newly selected lines are tested for yield and other traits and compared with the existing best strains which is released as a new variety. The process is known as Evaluation where seeds are produced from this variety are multiplied and distributed.

In this article, types and procedures of selection process (Natural &Artificial) will be discussed briefly.

The selection process first used in Germany for improving the sugar beet and small grains such as rye and wheat. For this reason, it’s also called as German method or German method of broad breeding. 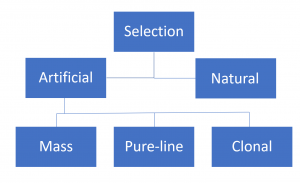 
There are two types of selection:

And artificial selection has three modes:

Selection which operates in nature without human interference is called natural selection. Natural selection is a rule in the nature and has resulted in evolution. According to it, the fittest can survive and rest wipe out. It’s a process that favors heritable traits that increase the survival chances of an organism, allowing the organism to reproduce more!

The five key points of natural selection are competition, adaptation, overproduction, speciation. “Survival of  the fittest” is a phrase that originated from Darwinian evolutionary theory as a way of describing the mechanism of natural selection. Natural selection is the process of naturally “Screening traits”(characteristics) within individuals within a species for or against a certain outcome. It can affect morphological, physiological, biochemical and anatomical characters, however natural selection can only act on traits which can be genetically inherited and which are expressed.

In case of sexual reproduction,

In case of asexual reproduction,

In case of sexual reproduction,

In case of asexual reproduction,

Artificial selection is the intentional reproduction of plants that have desirable traits. This is done by man, with the purpose to ensure food security and producing new varieties of plants that are higher yielding, resistant to pests and diseases, drought resistant and regionally adapted to different environments and growing conditions. This would ensure that the speed and efficiency of production and quality of crops are maximized. Thus take a relatively short amount of time as compared to the natural selection. Artificial selection is also known as selective breeding.

1. Guayule: A rubber-producing plant from mexico, guayule (Parthenium argentum), was hybridized with their northern relatives to produce hybrid plants that could transfer cold tolerance to guayule.

This is an official account of this website. This ID holds articles from two categories. 1. Articles from our non-authors. 2. Articles of the authors whose IDs were deleted.
Previous Oomycetes: Order Saprolegnia
Next Types & Procedures of Selection Process (Part-2)