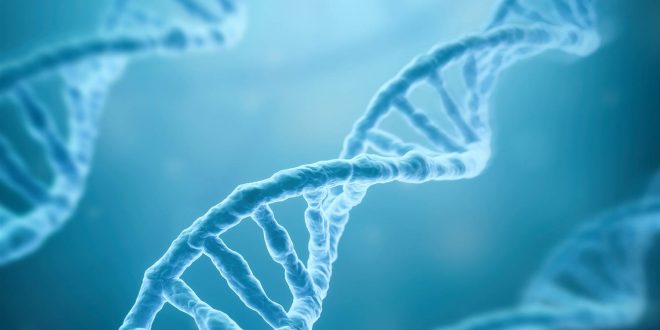 The genes of nuclear chromosome have a significant and key role in the inheritance of almost all traits from generations to generations,but altogether they cannot be considered as the sole vehicle of inheritance because certain experimental evidences suggest the occurance of certain extranuclear genes or DNA molecules in the cytoplasm of many prokaryotic and eukaryotic cells.For example,bacterial cells such as E.coli possess a single main chromosome in the nucleoid and often extra DNA elements called plasmids in the cytoplasm;the eukaryotic cells possess a main complement of chromosomes in the nucleus or extra DNA molecules or chomosomes in their mitochondria and chloroplasts.These cytoplasmic extra-nuclear genes or DNA molecules have a characteristic pattern of inheritance which does not resemble with that of genes of nuclear chromosomes and is known by different terms such as Non-Mandelian, Non-Chromosomal, Maternal, Extra-Chromosomal, Cytoplasmic and Extra-Nuclear Inheritance.

This article will contain brief discussions about the following topics:

They show the following characteristic features.

A. Maternal Inheritance or Maternal effect

B. Extranuclear Inheritance by Cytoplasmic Organelles

The cytoplasmic inheritance is of two types:

An individual’s mitochondria are generally only inherited from his or her mother. A MtDNA copy is passed down entirely unchanged, through the maternal line. Males cannot pass their MtDNA to their offspring although they inherit a copy of it from their mother. A change (mutation) in one of the mitochondrial genes that makes it faulty, can therefore be passed by the mother to a child in her egg cells. This pattern of inheritance is therefore often referred to as maternal inheritance. The egg cell contains many mitochondria, each having on average one to several copies of the mitochondrial genes. If a particular gene in every mitochondrion in an egg cell is faulty, the disruption to energy production would be so severe that the early embryo would probably not survive. The fact that a person survives to birth and is affected with a mitochondrial condition means that they must have inherited two types of mitochondria from his or her mother: some containing the working copy of the gene, and some containing the faulty gene. The working copy of the mitochondrial gene will still be able to send the right instructions, but the amount of energy produced may be impacted and may result in a mitochondrial condition.On the other hand, having some mitochondria with a faulty gene may cause no problem at all.

This  phenomenon should not be confused with maternal effect of genes which is also called maternal inheritance. 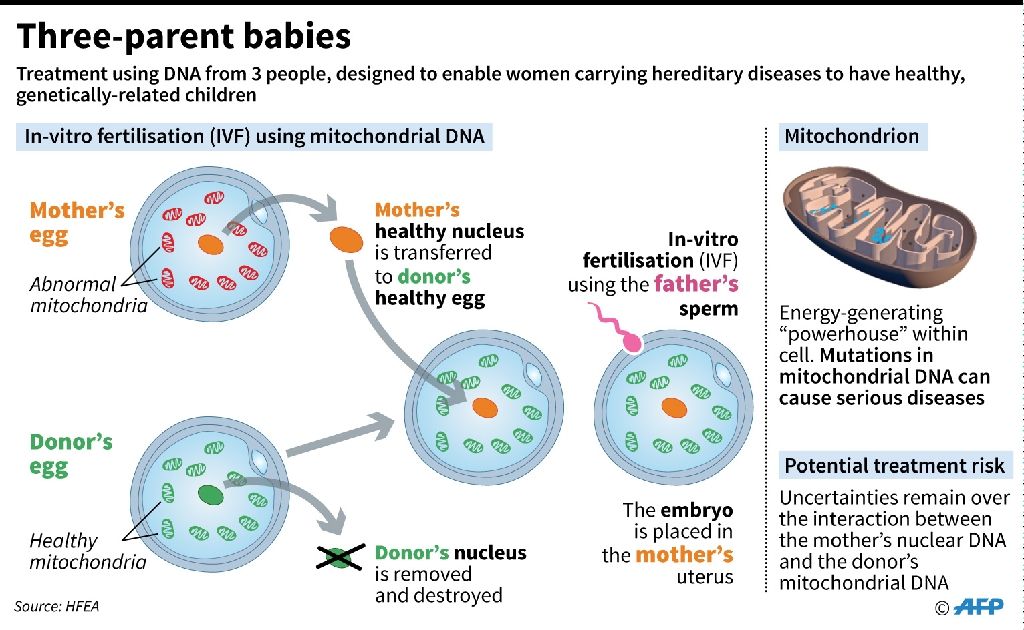 Three-parent baby concept was first introduced by John Zhang and his team at the New Hope Fertility centre in New York City,2016.It’s the process of producing human offspring from the genetic material of one man and two women through the use of assisted reproductive technologies, specifically mitochondrial manipulation (or replacement) technologies and three-person in-vitro fertilization(IVF). In general, the reproductive technologies used to produce three-parent babies focus on replacing or otherwise reducing the effects of mutations that occur in the DNA of cellular organelles known as mitochndria, which reside in the cell cytoplasm.

Plastids are self duplicated and have some amount of DNA and plays an important role in cytoplasmic inheritance. Plastids have green pigments called chloroplasts. Chloroplasts contain a unique circular DNA (cp DNA) in the stroma that is completely different from the nuclear genome. Plastid inheritance means the inheritance of plastid characteristics due to plasma genes lo­cated in plastids. Plastid inheritance was first described by C. Corens (1908) in the four o’clock plant, Mirabilis jalapa. 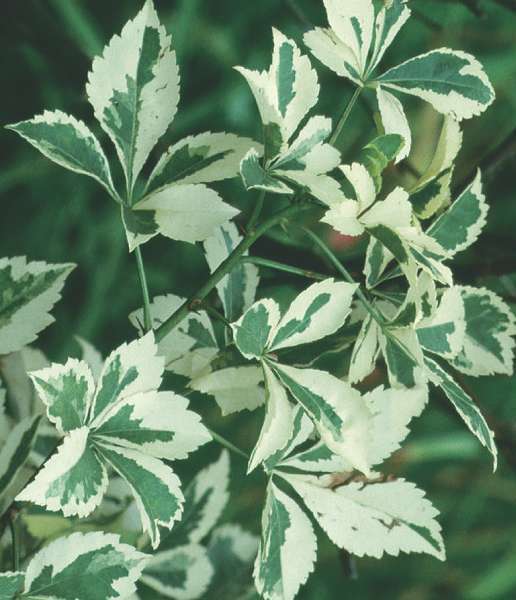 Leaves of Mirabilis jalapa may be green, white or varie­gated and some branches may have only green, only white or only variegated leaves. Correns made reciprocal crosses in all combinations among the flowers produced on these three types of branches. Varie­gation means the presence of white or yellow spots of variable size on the green background of leaves.Thus it forms the mosaic pattern of coloration on a leaf. Due to certain inher­itable defects chloroplast of all cells or some cells of leaf often are unable to synthesize the chlorophyll pigments. Such cells remain non- green and form white or yellow coloured leaf, or white or yellow patches, interspersed with ar­eas containing normal green cells with healthy chloroplasts.

Variegation may be produced by 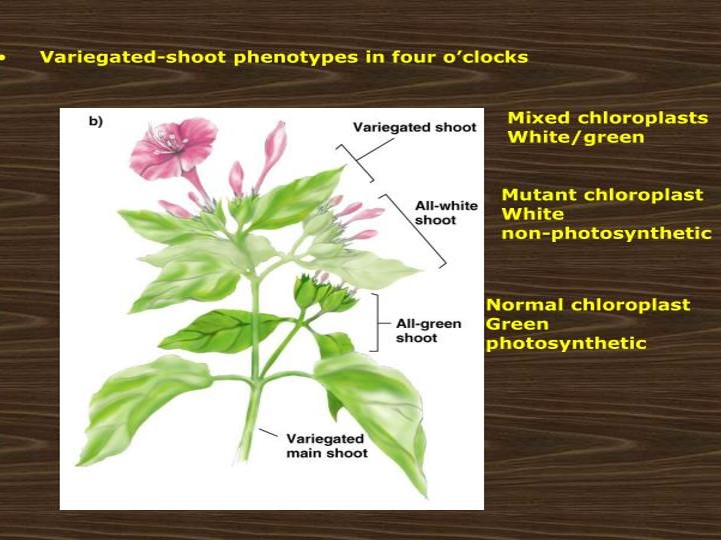 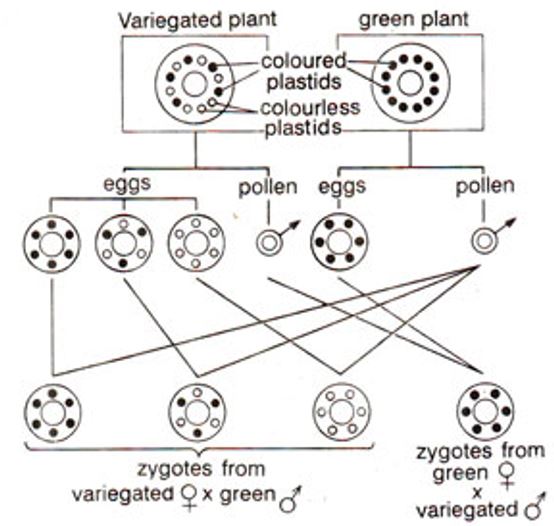 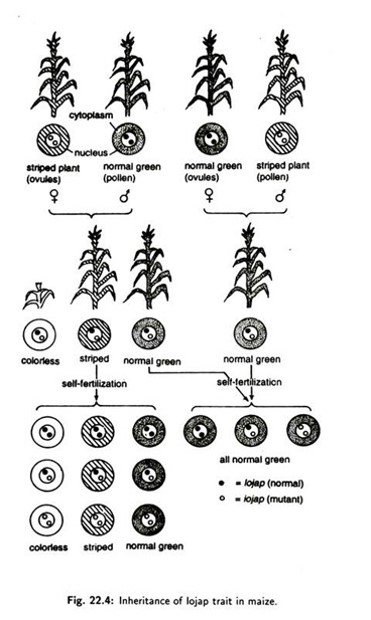 The advantage of many self-reproducing cellular organelles in eukaryotes are –

This article is completely based on by the lecture of Dr. Ritah Sarah Borna, Assistant Professor, Department of Botany, University of Dhaka.

Some info and pictures have been added by the author. Any mistake, error, misinformation and other related things found in this article are only author’s to blame.

This is an official account of this website. This ID holds articles from two categories. 1. Articles from our non-authors. 2. Articles of the authors whose IDs were deleted.
Previous Meiosis: Reductional Division
Next Classification of Life: The Three Domain Concept

It must give good read feel to any reader. So conscious and neat organisation of datas push me to complete the whole. Thank you so much.

Thank you for your kind comment,Taki.