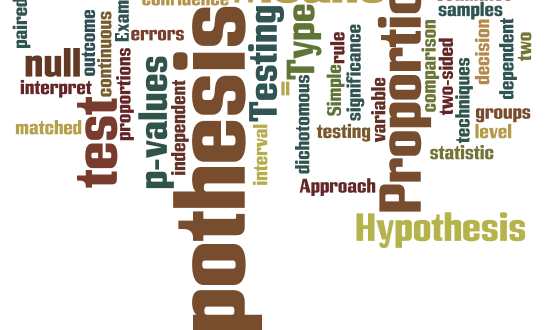 From the previous  topic, we learned about test of significance, a procedure for comparing observed data with a claim or hypothesis or predicted data.

A t-test is a statistical test that is used to compare the means of two groups. It is often used in hypothesis testing to determine whether a process or treatment actually has an effect on the population of interest, or whether two groups are different from one another.

A. Estimating the difference of means of two samples

B. Estimating the Standard error of that difference

Step 2: Calculate the degrees of freedom

N.B: If there’s no specified alpha level, we should use P0.05 (95% confidence level) and we must take the value of two tails.

So, the null hypothesis would be rejected and an alternative hypothesis should be taken. In this case, the estimates falls in the area of rejection.

Application and examples of t-test

Index of data of 40 boys and 46 girls gave following values.

From t table, we can find that the critical t value at 95% confidence level is 1.98  which is greater than our hypothesis value, hence the difference is probably due to chance that means not significant and also the null hypothesis is accepted.

Can we say that vitamins A and D were responsible for this difference?

At 23 df the highest obtainable  value of ‘t’ at 5% level of significance is 2.069 as found on reference to ‘t’ table. The ‘t’ value in this experiment is found at 2.74 which is much higher than the critical value. The significance is real and null hypothesis rejected.

Plant height in cm is given below:

Currently studying in 2nd year(BS Hon's) in the Department of Botany, University of Dhaka. I contain a little amount of knowledge of the vast Bioscience and Plant Science world. I'm running out of thirst for more knowledge related to this branch and have tried to write a little bit here. Please Forgive my mistakes and let me know about those. Email: shakilamahbuba27@gmail.com Minimum monthly resolution - Publish (1), Revise (2), Share (3)
@Mahbubaa_uwu
Previous Cell wall: Origin and Growth
Next History of Botanical Exploration: Indian Subcontinent (Part 1)