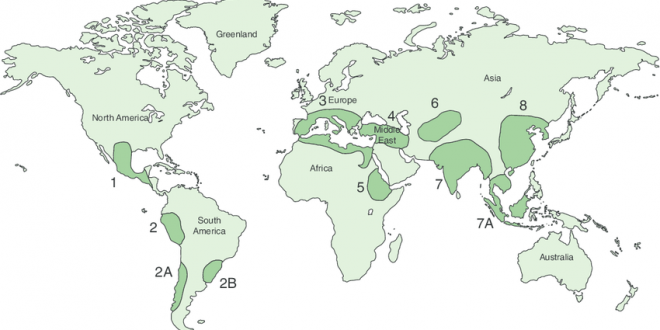 Concepts of center of origin of cultivated crops (Part 2)

Do you know what is Center of Origin?

This is the 2nd part of the topic: Concepts of center of origin of cultivated crops. If you have somehow missed the 1st part here is link to that article-

(2B) Chiloe Center (Island near the coast of southern Chile)

Includes the borders of the Mediterranean Sea. 84 listed plants.

Includes interior of Asia Minor, all of Transcaucasia, Iran, and the highlands of Turkmenistan. 83 species.

A total of 136 endemic plants are listed in the largest independent center.

The expansion of our understanding on cultivated plants pointed certain limitations on Vavilov’s views. These views require some modifications.

According to Vavilov primary center is marked by high frequency of dominant alleles towards the center and recessive towards the periphery. But this view is not acceptable as per the latest knowledge.

Concepts of center of origin of cultivated crops (Part 3)