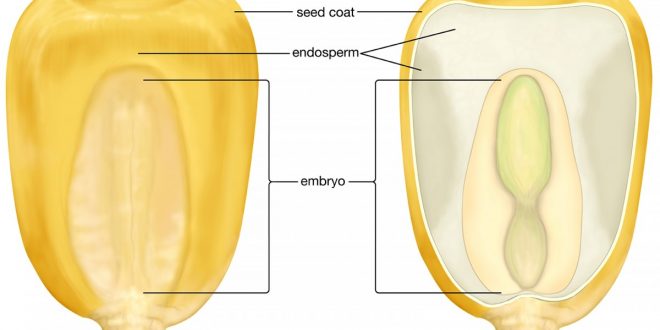 The endosperm is important because it is the main source of food for the embryo. In gymnosperms it is haploid and forms a continuation of the female gametophyte. In angiosperms, on the other hand, it is a new structure formed in most cases as the result of a fusion of the two polar nuclei and one of the male gametes. Since all three of the fusing nuclei are usually haploid, the endosperm contains the triploid number of chromosomes.

Endosperm formation is suppressed in two families, the Orchidaceae and Podostemonaceae. In the former, triple fusion is usually completed, but the fusion product either degenerates immediately or undergoes only one or two divisions. In the Podostemonaceae there is formed in the nucellus a large cavity or pseudoembryo sac (Fig. 1) into which the embryo is pushed down by the elongation of the suspensor. The pseudoembryo sac seems to serve as a kind of substitute for the endosperm, although it has an entirely different origin.

There are three general modes of endosperm formation.

Here, the first division and usually several of the following ones are unaccompanied by wall formation (Fig 121). The nuclei may either remain free or in later stages they may become separated by wall as in Cocos nucifera.

Usually at least the first few divisions are synchronous, but in later stages some of the nuclei may be seen in the prophase stage, others in metaphase, and still others in anaphase or telophase. Thus the number of endosperm nuclei may not always be a multiple of two. As divisions progress, the nuclei become pushed more and more towards the periphery, so that the center is occupied by a large vacuole. Often the nuclei are especially aggregated at the micropylar and chalazal ends of the sac and form only a thin layer at the sides. In Limanthes and Oxyspora free nuclei present but no wall formation occurs. 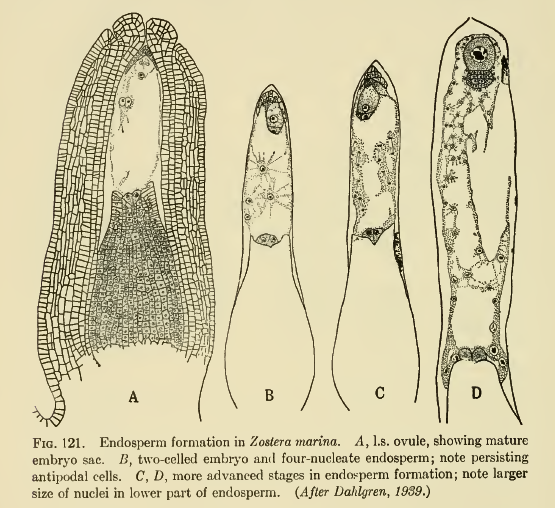 The first and most of the subsequent divisions are accompanied by wall formation, so that the sac becomes divided into several chambers, some of which may contain more than one nucleus. Examples: Acanthaceae, Anonaceae, Loranthaceae, Adoxa etc.

In the Cellular type the division of the primary endosperm nucleus is followed immediately by a chambering of the sac. The first wall is usually transverse but sometimes vertical or oblique, and in a few cases the plane of division is not constant. 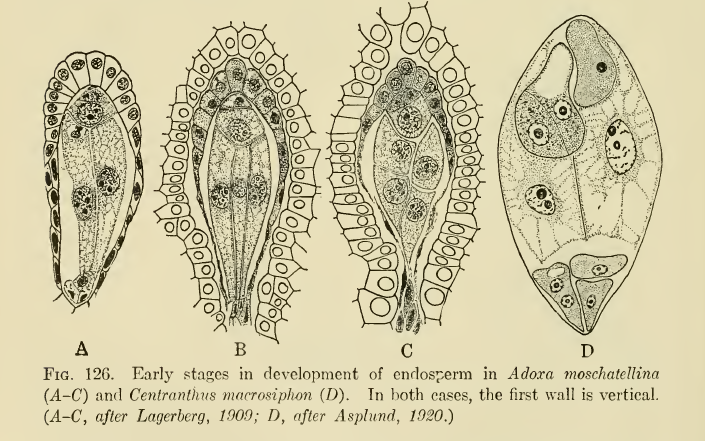 Adoxa (Lagerberg, 1909) is a well-known instance in which the first as well as the second division of the endosperm mother cell is vertical, resulting in the formation of four large cylindrical cells, all similar to one another (Fig. 12QA-B). The third division is transverse and results in eight cells arranged in two tiers (Fig. 126C). The fourth division is also transverse but further divisions are irregular.

is intermediate between the Nuclear and the Cellular types. Here the first division is followe by a transverse wall resulting in a micropylar and a chalazal chamber. Subsequent divisions are usually free nuclear and may take place in both chambers, but as a rule the main body of the endosperm is formed by the micropylar chambe only.

Eremurus (Stenar, 1928a) may be cited as an example of a typical Helobial endosperm. The first division of the primary endosperm nucleus results in the formation of two chambers, a large micropylar and a small chalazal (Fig. 139 A). Free nuclear divisions occur in both but are more rapid in the micropylar chamber (Fig. 139 B-D).

(Figures will be added later)

Source: An Introduction to the Embryology of Angiosperm by P. Maheshwari.

Currently in 4th year (Hons) in the Department of Botany, University of Dhaka. Planned to have multiple careers one by one but promised to be with 'Plantlet' as long as it's primary stage remains unfinished. Email: abulaisshomrat@gmail.com. Minimum monthly resolution - Publish (1), Revise (3), Share (5)
Previous Pyrrophyta: The Fire Algae (Dinoflagellate)
Next Measures of Central Value: Mean, Median, Mode & Others