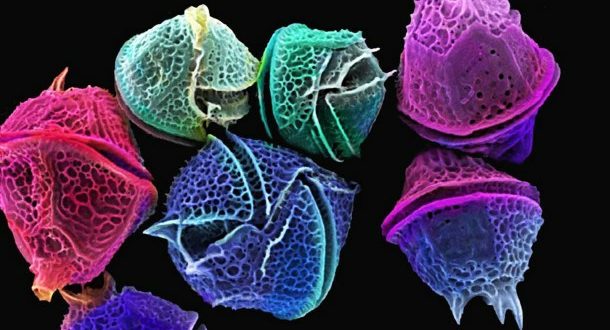 Pyrrophyta or fire algae is a division of unicellular algae that has a yellow brown color, and has two different flagella which are ribbon-shaped. It contains some pigments (chlorophyll-a, chlorophyll-b, c1, c2 and fucoxanthin) that can photosynthesize.

Early botanists classified dinoflagellates as a separate division of algae, which they named Pyrrophyta, after the Greek word ‘pyrr(h)os’ meaning fire. Later it was found that Pyrrophyta division includes many members which for the convenience of study were divided into dinoflagellates and cryptomonads.

There had been a controversy regarding the true nature of Pyrrophyta. Because they can move with the flagella and some members can’t produce their own foods, zoologists like to consider them as protozoans.


One of the fascinating characteristics of Dinoflagellate is that it can produce and emit light. As a result, the habitat containing them may show light emitting character during night hours.

The Noctiluca scintillans (‘sea sparkle’) is an example of such dinoflagellate that exhibits bioluminescence. The name of this algae has been recorded to mean “sea ghost” or “fire of the sea”.

Dinoflagellate are cause to Bioluminescence

They contain luciferase, the main enzyme involved in dinoflagellate bioluminescence, and luciferin, a chlorophyll-derived tetrapyrrole ring that acts as the substrate to the light-producing reaction. The luminescence occurs as a brief (0.1 sec) blue flash (max 476 nm) when stimulated, usually by mechanical disturbance. Therefore, when mechanically stimulated by boat, swimming or waves, luciferin produces light with the help of luciferase enzyme.

Dinoflagellates can use bioluminescence as a defense mechanism. They can startle their predators by their flashing light or they can ward off potential predators by an indirect effect such as the bungler-alarm. The dinoflagellate can use its bioluminescence to attract attention to itself, thereby bringing attention to the predator and making the predator more vulnerable to predators from higher trophic levels.

Dinoflagellates sometimes bloom in concentrations of more than a million cells per milliliter. Some species produce neurotoxins, which in such quantities kill fish and accumulate in filter feeders such as shellfish which in turn may pass them on to people who eat them.

This phenomenon is actually red tide that originates from the color the bloom imparts to the water. Some colorless dinoflagellates are may also form toxic blooms, such as Pfiesteria.

Some dinoflagellate blooms are not dangerous. Bluish flickers visible in ocean water at night often come from blooms of bioluminescent dinoflagellates, which emit short flashes of light when disturbed. Red tide mentioned is more specifically produced when dinoflagellates are able to reproduce rapidly and copiously on account of the abundant nutrients in the water (eutrophication).

Although the resulting red waves are an unusual sight, they contain toxins that not only affect all marine life in the ocean, but the people who consume them, as well. A specific carrier is shellfish. They can introduce both non-fatal and fatal illnesses. One such poison is saxitoxin, a powerful paralytic. Human imputs of phosphate further encourage these red tides, so there is a strong interest in learning more about dinoflagellates, from both medical and economic perspectives.

This is an official account of this website. This ID holds articles from two categories. 1. Articles from our non-authors. 2. Articles of the authors whose IDs were deleted.
Previous Classification Of Land
Next Endosperm & It’s Types in Angiosperms

Informative one❤.
Point-wise organisement may give a better look.

This article is ranked on the first page of google for keyword ‘pyrrophyta’. ❤️

How exiting is biology

I love the fire algae