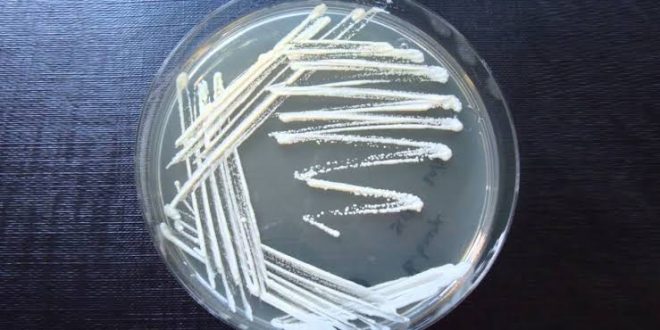 In microbiology, the term isolation refers to the separation of a strain from a natural, mixed population of living microbes, as present in the environment, in order to identify the microbes of interest. Isolation can be done from, for example water or soil flora or from living beings with skin flora, oral flora or gut flora.

Proper isolation requires that small number of cells be inoculated into relatively large volume or over an expansive area of medium. When too many colonies are present, some cells are overcrowded and do not develop. To prevent this condition, the original inoculum is diluted in several times in a process called serial dilution.

Serial dilution is used to reduce the concentration of microscopic organisms or cells in a sample. Several 10-fold dilutions of the sample are commonly used for this purpose. To make a 10-fold (10-1) dilution one can mix 1.0 ml of sample with 9.0 ml of diluent. A 100-fold (10-2) dilution can be achieved by making two successive 10-fold dilutions and so on.

In microbiology, it is assumed that each live bacterium develops and divides to produce a single colony. But this is not always true because bacteria frequently grow linked in chains or as clumps. Therefore, a colony often results, not only from single bacterium but also from short segments of a chain or from a bacterial clump. To reflect this reality, these are often reported as colony forming unit.

There are several techniques for microbial isolation. They are;

1.0 ml of dilutions of the bacterial suspension pipetted into a sterile Petri plate. The nutrient agar medium is kept liquid by holding it in a water bath at about 45°C, is poured over the sample, which is then mixed into the medium by gentle agitation of the plate gently or moved back and forth (first N-S, the NW-SE, then NE-SW). When the agar solidifies, the plate is incubated at 37°C. During a 24 to 48 hour incubation, the cells divide to form discrete colonies within the nutrient agar (from cells suspended in the nutrient medium as the agar solidifies) as well as on the surface of the agar plate.

Inoculum of an appropriately diluted culture is spread over the surface of a pre-poured, solidified agar medium. The inoculum is then spread uniformly over the surface of the medium with a specially shaped, sterilized glass or metal spreader. The plate is then incubated until the colonies appear.

This method positions all the colonies on the surface of the medium.

The surface of the plate must not be too moist because the added liquid must soak in so the cells remain stationary. For this purpose, about 0.1-0.3 ml inoculum is taken in each plate.

Membrane filters are used in microbiology laboratories for liquid sterilization and isolation of microbes. These filters are composed of high tensile strength polymers such as Cellulose Acetate, Cellulose Nitrate etc. The filters contain a large number of pores. By adjusting the polymerization conditions during manufacture, pore size can be precisely controlled. The membrane filter functions like a sieve and trap particles in the filter surface. These filters are only 0.1 mm thick. The pore size is 0.22-0.45 micro meter intended for bacteria. Filters with 0.01 micro meter pore size are also available for viruses.

In this technique, a vacuum is created in the receiving flask. Air pressure then forces the liquid through the filter. At least 10 ml of the sample is passed through the filter. The microorganisms are trapped on the filter surface. This filter is then transferred to a petri dish containing pre-poured set medium, where colonies arise arise from the bacteria in the filters surface. This method is applied frequently for detection enumeration and isolation of coliform bacteria.

It is special isolation technique to isolate the Gram-negative, aerobic bacterium Azotobacter. These bacteria are abundant in garden soil as free living nitrogen fixers. This method is also called soil plaque technique.

Azotobacter was discovered in 1901 by Dutch microbiologist and botanist Martinis Beijerinck and presumably the Mud-Pie technique was first developed by him.

In this method, alkaline to neutral, dry garden soil is supplemented with pulverized starch in a ratio of 20:1. Debris of the soil should be discarded by coarse sieving. Soil and starch are mixed thoroughly. Adequate water is mixed to get a thick muddy paste. Then it is given a shape of a pie on a solid base. The upper surface of the plaque is kept smooth and shiny with water. It is sealed in a moist chamber of plastic bag with a wet cotton ball to provide adequate moisture and avoid unwanted contamination. The whole set up is then incubated at 30-37°C for 2-3 days.

The whole set up works as a selective system. The supplemented starch works as a carbon source for only the microbes who are able to utilize it. As no other nitrogen source are supplemented, utilizing the starch acquiring atmospheric nitrogen, only Azotobacter are able to grow rapidly and form dark brownish to black colored colonies (as they may produce melanin like pigments) on top surface of the Mud-Pie. From there, they can be isolated on nutrient medium.

A sterile inoculating loop is dipped into a mixed culture that contains more than one type of microbe and is streaked in a pattern over the surface of the nutrient medium. As the pattern is traced, bacteria are rubbed off the loop into the medium. The loop is flamed, touched to the first area and a second series is made in a second area.

Similarly, streaks are made in the third and fourth areas, thereby spreading out the individual cells so they grow as separated colonies. On incubation each cell will grow exponentially to form a discrete colony on the plate. This colonies can be picked up with an inoculating loop and transferred to a test tube of nutrient medium to form a pure culture containing only one type of bacterium.

My life has always been like Brownian particles with random motions. While my life's been colliding with Plantlet, hope to have perfect momentum for the best outcome.
Previous Measurement of Microbial Growth
Next Cultivation of Microorganisms

Nice article dada. Didn’t check the sources of the info, but the arrangement and description seem right and helpful. Keep up the good work.

Thanks for your reviews, dada. Hope to have the progressive ideas about certain articles in future.

Nice write-up! However, to me, the title would be more accurate as “General methods of bacterial isolation”.