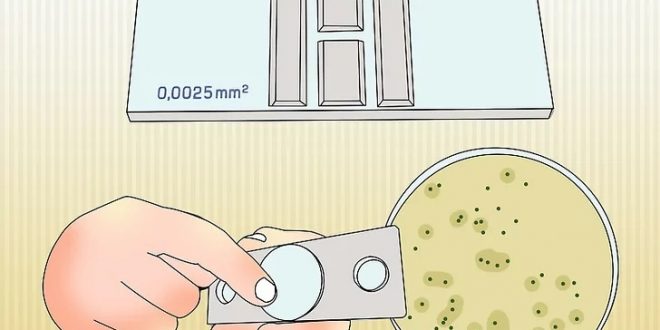 The direct total cell count involves counting the number of cells in a simple microscopically. This technique is very similar to that used in blood cell counts.

Scientists perform a direct microscopic count using a specially designed slide called a Petroff-Hausser cell counter/ counting chamber/ cytometer/ hemacytometer (because it was devised originally for counting blood cells) calibrated to accept a tiny sample that is spread over a premeasured grid.

In such a counting chamber, a grid with squares of known area is marked on the surface of a glass slide. There are 25 large squares and each large squares have 16 smaller squares in them. The area of each small square is 1/400 mm2 (total area 1.0 mm2) and a glass cover slip tests 0.02 mm above the slide. So, total volume of the area is 0.02 mm3 or 0.00002 cm3 (ml). Once the number of cells has been counted in several different fields, the average number of cells per unit area of grid can be calculated under the pahse-contrast microscope without staining, giving a measure of the number of cells per 0.00002 cm3. Microscopic counts can be done on either sample dried in slides or on samples in liquid. Dried samples can be stained to increase contrast between cells and their background.

The total number of cells in solution is,

A viable cell is that is able to divide and form offspring. To do viable cell count, we typically determine the number of cells ina sample capable of forming colonies on a suitable nutrient medium.

The most frequently used method of measuring viable bacterial populations is the plate count method.

When a plate count is performed, it is important that only a limited number of colonies develop in the plate. When too many colonies are present, some cells are overcrowded and do not develop; these conditions cause inaccuracies in the count. The U.S Food and Drug Administration (FDA) suggests to count only plates with 25 to 250 colonies, but many microbiologists prefer plates with 30 to 300 colonies. To ensure that some colony counts will be within this range, the original inoculum is diluted several times in a process called serial dilution.

Serial dilution is used to reduce the concentration of microscopic organisms or cells in a sample. Several 10-fold dilutions of the sample are commonly used for this purpose. To make a 10-fold (10-1) dilution one can mix 1.0 ml of sample with 9.0 ml of diluent. A 100-fold (10-2) dilution can be achieved by making two successive 10-fold dilutions and so on.

If there are 11 colonies in 1:100000 diluted in sample containing plate, then it can be said that the original sample contains 11×106 CFU/gm.

For filamentous bacteria and molds, the usual measuring methods are less satisfactory. A plate count would not measure this increase in filamentous mass. One of the better ways to measure the growth of filamentous organisms is by dry weight which gives an indication of the cell mass. This is the most direct approach for quantitative measurement of a mass of cells.

In this procedure, the organism is taken from the growth medium, filtered to remove extraneous material, sample is taken in a 50 ml porcelain cup and dried in a dessicator at about 100°C dry heat oven. It is then weighted. The procedure depends on complete or at least constant degrees of dehydration and accurate weighing. This increase in weight represents biological synthesis and with data on cell volume available, can be used to calculate cell numbers.

However, this method can be used only with very dense suspensions and the cells must be washed free of all extraneous matter. Moreover, dry weight may not always be indicative of the amount of living material in cells.

My life has always been like Brownian particles with random motions. While my life's been colliding with Plantlet, hope to have perfect momentum for the best outcome.
Previous Microbiology of Food
Next General Methods of Microbial Isolation