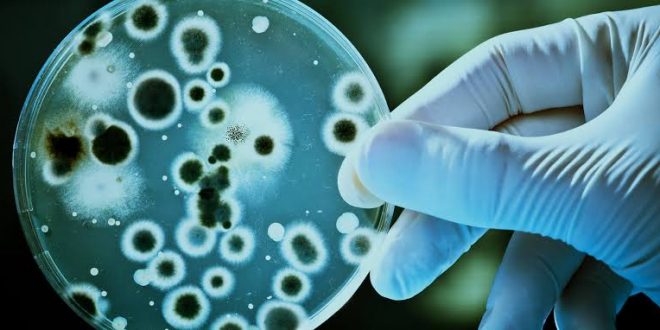 The generation time “g” can be determined from the number of generations “n” that occur in a particular time interval “t”.
g=t/nG

When a few bacteria are inoculated into a liquid growth medium and population is counted at intervals, it is possible to plot a bacterial growth curve showing growth of cells over time. It is difficult to show changes in population by using arithmetic numbers. For showing the growth curve logarithmic scales are generally used.

There are 4 basic phases of growth


1. Lag phase: In a fresh medium after few cells are inoculated, for a while number of cells changes very little because the cells do not immediately reproduce. Some cells may die from the shock of transfer or the inability to adapt to the new environment. This period of little or no cell division is called the lag phase. It can last for 1 hour or several days. During this time, however, the cells are not dormant. The microbial population is undergoing a period of intense metabolic activity involving in particular, synthesis of enzymes and various molecules. Physiologically they are very active and are synthesizing new protoplasm.

2. Log phase: Eventually, the cells begin to divide and enter a period of growth or logarithmic increase, called the log/ exponential growth phase. It is a period during which the curve increases geometrically. Cellular reproduction is most active during this period and generation time reaches a constant minimum. Because the generation time is constant, a logarithmic plot of growth during log phase is a straight line. This phase will continue as long as cells have adequate nutrients and the environment is favorable. During this phase, the population fulfills its potential generation time and growth is balanced and genetically coordinated. The log phase is the time when cells are most active metabolically and is preferred for industrial purposes.

3. Stationary phase: The number of microbial death balances the number of new cells and population stabilizes. This period of equilibrium is called stationary phase. In this phase, the population enters a survival mode in which cells stop growing or grow slowly. The curve levels off because the rate of cell death balances out the rate of multiplication. What causes exponential growth to stop is not always clear. The exhaustion of nutrients, accumulation of waste products and harmful changes in pH may all play a role.

4. Death phase: As the limiting factors intensity, cells begin to die at exponential rate (literally perishing in their own wastes) and most are unable to multiply. The number of deaths eventually exceeds the number of new cells formed and the population enters the death phase/ logarithmic decline phase. This phase continues until the population is diminished to tiny fraction of the number of cells in the previous phase or until the population dies out entirely. The speed with which death occurs depends on the relative resistance of the species and how toxic the conditions are, but it is usually slower than the exponential growth phase. Viable cells often remain many weeks and months after this phase has begun. In the laboratory, refrigeration is used to slow propagation of death phase so that cultures remain viable as long as possible. For some bacterial species, especially soil bacteria, they can escape cell death by forming endospores.

But during inoculation bacterial number is 1, if the initial number of cell is N0

The generation time “g” can be determined from the number of generations “n” that occur in a particular time interval “t”,

Effects of the temperature on bacterial growth

Microorganism are classified into three primary groups on the basis of their preferred range of temperature:

Organisms capable of growing at 0°C . There are two fairly distinct groups.

One group composed of organisms that have a optimum growth temperature of 15°C. These microorganisms are sensitive that they will not even grow at room temperature (25°C). Found mostly in the ocean depths or in certain polar region.

Other group composed of organism that have optimum temperature of 20-30°C and can not grow above 40°C. These may be called psychro-tolerant. e.g. Staphylococcus aureus.

Organisms having an optimum growth temperature of 25-40°C. These are the most common type of microbes. Mesophiles include most of the of spoilage and disease organisms.

One of the most profitable discoveries so far was a strict thermophile Thermus aquaticus, which produces an enzyme that can make copies of DNA at high temperatures. These enzymes “Taq polymerase” is now an essential component of the PCR. Some microbes, members of the Archaea, have an optimum growth temperature of 80°C or higher. These organisms are called hyperthermophiles or sometimes extreme thermophiles. Most of these organisms live in hot springs associated with volcanic activity; Sulfur is usually important in their metabolic activity. The known record for bacterial growth and replication at high temperatures is about 121°C near deep-sea hydrothermal vents. The immense pressure in the ocean depths prevents water from boiling even at temperatures well above 100°C.

Most bacteria grow best in a narrow pH range near neutrality, between pH 6.5 and 7.5; these are called Neutrophiles. However, some bacterial species, such as Vibrio cholerae, can tolerate acidic conditions as low as pH 2.0 and alkaline conditions as high as pH 9.5. Very few bacteria grow at an acidic pH below about pH 4.0. This is why a number of foods, such as sauerkraut, pickles and many cheeses are preserved from spoilage by acids produced by bacterial fermentation.

Some bacteria are remarkably tolerant of acidity called acidophiles. One type of chemoautotrophic bacteria. e.g. Thermoplasma can survive at a pH value of 1. The optimum pH of molds and yeast is 5-6. The most acidophilic prokaryote is Picrophilus oshimae, growing optimally at pH 0.7 and 60°C.

Microorganisms showing growth at pH of 8 or higher are called alkaliphiles.

Bacillus firmus is alkaliphilic but has an unusual broad pH range for growth from 7.5 to 11.

My life has always been like Brownian particles with random motions. While my life's been colliding with Plantlet, hope to have perfect momentum for the best outcome.
Previous Cultivation of Microorganisms
Next Control of Microorganisms