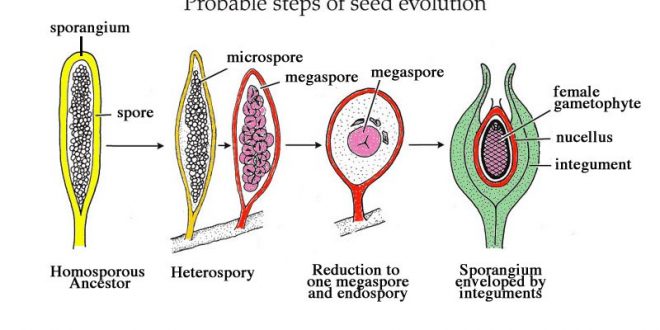 The phenomenon of the development of two types of spores (differing in size, structure and function) by the same species is known as heterospory.

The origin of heterospory can be better discussed on the basis of evidences from paleobotany, developmental and experimental studies.

It has been suggested that heterospory arose due to degeneration of some spores in a few sporangia. As more nutrition becomes available to less number of spores, the surviving spore grow better, hence increase in their size.

Palaeobotanical evidences show that the earlier vascular plants were all homosporous and the heterosporous condition appeared subsequently in the lowermost upper Devonian.

A number of heterosporous genera belonging to the Lycopsida, Sphenopsida and Pteropsida were known in the late Devonian and early Carboniferous periods.

Under conditions of low light intensity, the photosynthetic activity of Selaginella was retarted and it produced microsporangia.

By sudden lowering of the temperature, the size of the microspores in the sporocarp of Marsilea increases by six times.

The phenomenon of heterospory becomes distinct either before or after meiosis in Selaginella. Isoetes, it is distinct before meiosis.

Because of heterospory, the gametophytic tissue is reduced. Partial or complete retention of megasporangium and female gametophyte on the sporophyte also takes place. They show reduction in megaspores and male gamete. All these characters show a tendency towards seed habit.

One of the most important advantages of heterospory is the formation of seed habitat. The origin of seed habit is associated with the following:

Selaginella exhibits remarkable approach to the seed habit because of the following features:

Although certain species of Selaginella suggest early stages in the evolution of seed habit, Selaginella should not be considered as an ancestor to seed plants because:

Therefore, Selaginella has considerably advanced towards seed habit but it’s approach to true seed is not complete.

Currently in 3rd year in Department of Botany, University of Dhaka. I am the girl who is nature lover & craving for learning something new.
Previous Riccia: A Common Liverwort
Next Monosaccharide : Simple Sugar

Bryophytes: Methods of Creating Their Generations

For studying, researching, and observing plants and plant life, we need to start from the …