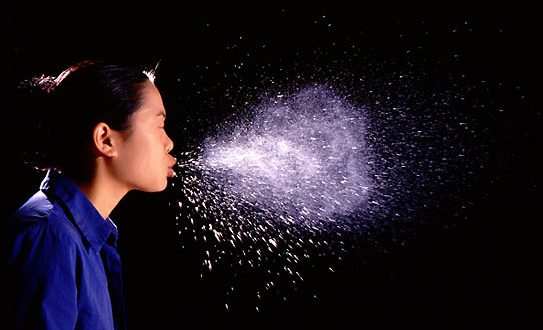 Aeromicrobiology is the study of living microbes which are suspended in the air. These microbes are referred to as bioaerosols. Though there are significantly less atmospheric microorganisms than there are in oceans and in soil, there is still a large enough number that they can affect the atmosphere (like they can even contribute in cloud formation).

Major Characteristics and Stratification of the Atmosphere

Atmosphere is habitat and Medium for microbial dispersal

Several properties of spores contribute to their ability to withstand transport through the atmosphere. Such as:

Microbial Communities
Many different microorganisms can be in aerosol form in the atmosphere, including viruses, bacteria, fungi, yeasts and protozoans. In order to survive in the atmosphere, it is important that these microbes adapt to some of the harsh climatic characteristics of the exterior world, including temperature, gasses and humidity. Many of the microbes that are capable of surviving harsh conditions can readily form endospores, which can withstand extreme conditions.

Bacteria that can resist environmental stresses is Bacillus anthracis. It is a gram positive, rod shaped bacteria that utilizes spore formation to resist environmental stresses. The spore is a dehydrated cell with extremely thick cell walls which can remain inactive for many years. This spore makes Bacillus anthracis a highly resilient bacteria, allowing it can survive extreme temperatures, chemical contamination, and low nutrient environments. This bacteria is associated with Anthrax, which is a severe respiratory disease that infects humans. Conidia of Streptomycetes are also available in air.

Fungal: The mycroflora of air consists of chiefly of spores of fungi, especially Penicillium, Aspergillus, Cladosporium, Hemodendrum, and ascospores of yeast.

Fungi that can resist environmental stresses is Aspergillus fumigatus, which is a major airborne fungal pathogen. This pathogen is capable of causing many human diseases when conidia are inhaled into the lungs. While A. fumigatus lacks virulence traits, it is very adaptable to changing environmental conditions and therefore is still capable of mass infection.

Currently in 4th year (Hons) in the Department of Botany, University of Dhaka. Planned to have multiple careers one by one but promised to be with 'Plantlet' as long as it's primary stage remains unfinished. Email: abulaisshomrat@gmail.com. Minimum monthly resolution - Publish (1), Revise (3), Share (5)
Previous Phases of Growth in Batch Culture
Next Distribution and Sources of Air Microbes