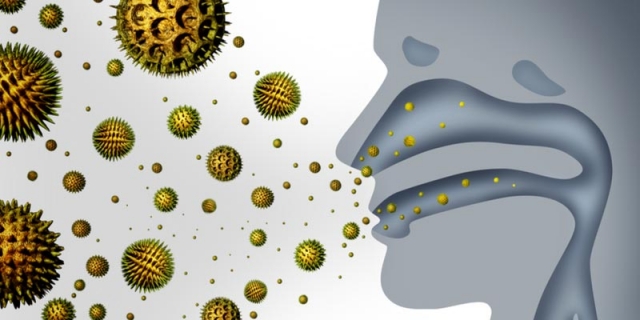 Distribution and Sources of Air Microbes

Distribution of Microbes in Air

No microbes are indigenous to the atmosphere rather they represent allochthonous populations transported from aquatic and terrestrial habitats into the atmosphere. Microbes of air within 300-1,000 or more feet of the earth’s surface are the organisms of soil that have become attached to fragments of dried leaves, straw or dust particles, being blown away by the wind. Species vary greatly in their sensitivity to a given value of relative humidity, temperature and radiation exposures.

Air over land masses and sea

More microbes are found in air over land masses than far at sea. Spores of fungi, especially Alternaria, Cladosporium, Penicillium and Aspergillus are more numerous than other forms over sea within about 400 miles of land in both polar and tropical air masses at all altitudes up to about 10,000 feet. Microbes found in air over populated land areas below the altitude of 500 feet in clear weather include spores of Bacillus and Clostridium, ascospores of yeasts, fragments of mycelium and spores of molds and actinomycetes, pollen, protozoan cysts, algae, Micrococcus, Corynebacterium etc.

Dust of institutions and hospitals

In the dust and air of schools and hospital wards or the rooms of persons suffering from infectious diseases, microbes such as tubercle bacilli, streptococci, pneumococci and staphylococci have been demonstrated. These respiratory bacteria are dispersed in air in the droplets of saliva and mucus produced by coughing, sneezing, talking and laughing. Viruses of respiratory tract and some enteric tract are also transmitted by dust and air. Pathogens in dust are primarily derived from the objects contaminated with infectious secretions that after drying become infectious dust.

Droplets are usually formed by sneezing, coughing and talking. Each droplet consists of saliva and mucus and each may contain thousands of microbes. It has been estimated that the number of bacteria in a single sneeze may be between 10,000 and 100,000. Small droplets in a warm, dry atmosphere are dry before they reach the floor and thus quickly become droplet nuclei.

Many plant pathogens are also transported from one field to another through air and the spread of many fungal diseases of plants can be predicted by measuring the concentration of airborne fungal spores. Human bacterial pathogens which cause important airborne diseases such as diphtheria, meningitis, pneumonia, tuberculosis and whooping cough.

SOURCES OF MICROORGANISM IN AIR

Although a number of microorganisms are present in air, it doesn’t have an indigenous flora. Air is not a natural environment for microorganisms as it doesn’t contain enough moisture and nutrients to support their growth and reproduction. Quite a number of sources have been found to be responsible for the air micro flora.

1. Soil: One of the most common sources of air microflora is the soil. Soil microorganisms when disturbed by the wind, liberated into the air and remain suspended there for a long period of time. Digging or ploughing of the soil may also release soil microbes into the air.

3. Plant and Animal: Air currents may bring the microorganisms from plant or animal surfaces into the air. These organisms may be either commensals or plant or animal pathogens. For example, spores of Puccinia graminis travel over a thousand kilometers.

The main source of airborne microorganisms is human beings. Their surface flora may be shed at times and may be disseminated into the air. Similarly, the commensal as well as pathogenic flora of the upper respiratory tract and the mouth are constantly discharged into the air by activities like coughing, sneezing, talking and laughing.

The microorganisms are discharged out in three different forms which are grouped on the basis of the irrelative size and moisture content. They are droplets, droplet nuclei and infectious dust.

Droplet
Droplets are usually formed by sneezing, coughing or talking. Each consists of saliva and mucus. Droplets may also contain hundreds of microorganisms which may be pathogenic if discharged from diseased persons. Pathogens will be mostly of respiratory tract origin. Most droplets are relatively large and about 100m in size. The size of the droplet determines the time period during which they can remain suspended. When inhaled these droplets are trapped on the moist surfaces of the respiratory tract. Thus, the droplets containing pathogenic microorganisms may be a source of infectious disease.

Droplets are usually formed by sneezing, coughing and talking. Each droplet consists of saliva and mucus and each may contain thousands of microbes. It has been estimated that the number of bacteria in a single sneeze may be between 10,000 and 100,000.

Infectious Dust
Large aerosol droplets settle out rapidly from air on to various surfaces and get dried. Nasal and throat discharges from a patient can also contaminate surfaces and become dry. Disturbance of this dried material by bed making, handling a handkerchief having dried secretions or sweeping floors in the patient’s room can generate dust particles that add microorganisms to the circulating air. Most dust particles laden with microorganisms.

Survival time of Microorganisms in Atmosphere

Importance of Air microflora
Knowledge of microorganisms in air is important in several aspects.

Currently in 4th year (Hons) in the Department of Botany, University of Dhaka. Planned to have multiple careers one by one but promised to be with 'Plantlet' as long as it's primary stage remains unfinished. Email: abulaisshomrat@gmail.com. Minimum monthly resolution - Publish (1), Revise (3), Share (5)
Previous Microbiology of Air
Next Phylogenetic Classification of John Hutchinson