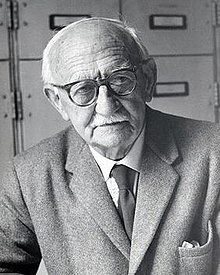 John Hutchinson was a British botanist associated with Royal Botanic Gardens, Kew, England. He developed and proposed his system based on Bentham and Hooker and also on Bessey.

His phylogenetic system first appeared as “The Families of Flowering Plants in two volumes.

1. The division Lignosae was further divided into 54 orders beginning with Magnoliales and ending in Verbenales.

2. The division Herbaceae was divided into 28 orders beginning with Ranales and ending in Lamiales.

3. The division Calyciferae was divided into 12 orders beginning with Butamales and ending in Zingiberales.

4. The division Corolliferae was divided into 14 orders beginning with Liliales and ending in Orchidales.

1. Hutchinson proposed the monophyletic origin of angiosperms from some hypothetical Pro-angiosperms having Bennettitalean characteristics.

2. He made a valuable contribution in phylogenetic classification by his careful and critical studies.

3. Monocots have been derived from Dicots.

4. According to him, the definitions of orders and families are mostly precise, particularly in case of subphylum Monocotyledones.

1. There is undue fragmentation of families.

2. Too much emphasis is laid on habit and habitat. Thus, creation of Lignosae and Herbaceae is thought to be a defect reflecting the Aristotelean view.

3. The origin of angiosperms from Bennettitalean-like ancestor is criticised by many, because the anatomical structures of the early dicotyledons are not tenable with such ancestry.

Currently in 4th year (Hons) in the Department of Botany, University of Dhaka. Planned to have multiple careers one by one but promised to be with 'Plantlet' as long as it's primary stage remains unfinished. Email: abulaisshomrat@gmail.com. Minimum monthly resolution - Publish (1), Revise (3), Share (5)
Previous Distribution and Sources of Air Microbes
Next Cronquist’s System of Classification