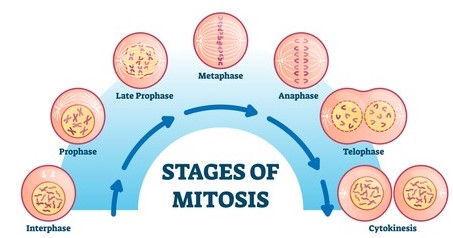 Mitosis: Equational Division and Its Stages

Where does mitosis occur?

As mentioned above mitosis occurs in those cells, where the ploidy level needs to be constant both in mother and daughter cells. These types of cells include:

In mitosis, there are two processes that occur periodically:

Karyokinesis (Division of the nucleus)

There are 5 phases in karyokinesis. They are as follows.

It lasts about 50 minutes.
There are 3 sub-phases:

1. At first the cells become almost round and the cytoplasm becomes viscous.
2. Dehydration of chromosomes happens.
3. Microtubules are arranged in spindle fiber.

1. Chromosomes further get shorter and thicker.
2. On the other hand nucleolus progressively becomes smaller and finally disappears.
3. Also nuclear membrane begins to break down.

1. Finally, the nuclear membrane breaks completely and releases the chromosomes.
2. Also spindles get their proper shape and size.
3. Then spindles and centriole pairs take a position to the poles.

1. Here spindles get attached with centromeres.
2. Disappearance of nuclear membrane and nucleolus occurs.
3. Chromosomes are moving to and fro.

It lasts only 2-10 minutes.
1. The spindles occupy the region of the nucleus.
2. The chromosomes move to the equatorial region of the cell. Therefore, gets settled down there.
3. Each chromosome splits longitudinally except centromere.
4. Finally chromosomes are in maximum thickness and look short.

Along with the cytoplasm, cellular organelles divide equally. Also, a cell plate between two newly formed cells appears. This cell plate is the divider that further divides one cell into two.

This is an official account of this website. This ID holds articles from two categories. 1. Articles from our non-authors. 2. Articles of the authors whose IDs were deleted.
Previous Mycoplasma: The Simplest Prokaryotic Cell
Next Phenols : Characteristics, Classification and Uses

Short and Useful! Hope to see more from you.