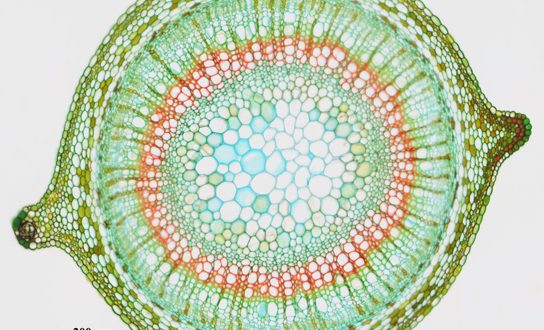 The part of the axis of the plant which is usually ascending and aerial in nature, and also bears the leaves and reproductive structures is called the stem. The stem together with the leaves which it bears constitute the shoot. It is composed of three tissue systems that include the epidermis, vascular, and ground tissues, all of which are made from simple cell types. In this article, the Primary Structure of Stem in Monocot and Dicot plants will be discussed explicitly.

In young dicotyledonous stems, there are three distinct regions – the epidermis, the cortex, and the stele.

These are described below:

The epidermis consists of a single layer of cells and is the outermost layer of the stem.

The region that lies next to the epidermis is the cortex.

The part of the cortex situated between the epidermis and endodermis is generally divided into two regions:

On the inside of the epidermis, there is usually band of collenchyma.

Parenchyma cells are generally regular in shape, have comparatively thin walls, and are not greatly elongated in any direction.

There are two varieties of these sclerenchyma cells

The innermost layer of the cortex is the endodermis consisting of barrel-shaped, elongated, compact cells, having no intercellular space among them.

The part of  the stem inside of the cortex is known as the stele. The stele consists of three general regions:

These three regions are described below:

The region between the vascular bundles and the cortex is known as the pericycle.

The xylem which is formed before the activity of the cambium has begun to produce xylem and phloem cells is called primary xylem. It is composed of two parts:

1. The xylem formed first is nearest the center of the stem is called protoxylem.

2. The more peripheral part of primary xylem is known as metaxylem.

In a dicotyledonous plant, the centre of the stem is composed of thin-walled parenchyma cells and is known as the pith.

The vascular bundles are separated from each other by radial rows of parenchyma cells known as pith rays.

The most distinctive and characteristic features of the monocot stem are as follows: