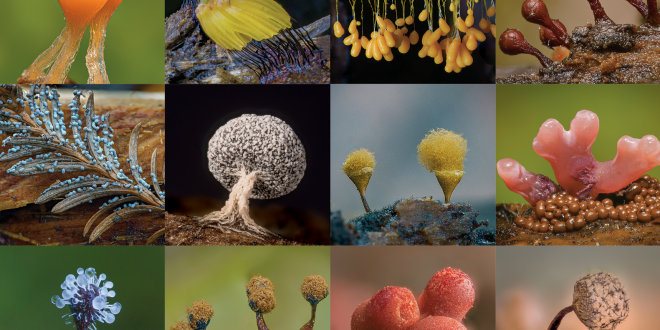 Slime mold or slime mould is an informal name given to several kinds of unrelated eukaryotic organisms that can live freely as single cells, but can aggregate together to form multicellular reproductive structures. Slime molds were formerly classified as fungi but are no longer considered part of that kingdom. Although not forming a single monophyletic clade, they are grouped within the paraphyletic group referred to as kingdom Protista. It’s also one of the rarest cell in the world that you can actually see with your own eye!

According to Alexopolous, Mims and Blackwell (2002), Phylum Myxomycota is known as true slime moulds (Myxomycetes). They are slimy, but they are not mouldy! More than 900 species of slime mold occur globally. Their common name refers to part of some of these organisms’ life cycles where they can appear as gelatinous “slime”. This is mostly seen with the Myxogastria, which are the only macroscopic slime molds. Most slime molds are smaller than a few centimeters, but some species may reach sizes up to several square meters and masses up to 20 kilograms.

Many slime molds, mainly the “cellular” slime molds, do not spend most of their time in this state. When food is abundant, these slime molds exist as single-celled organisms. When food is in short supply, many of these single-celled organisms will congregate and start moving as a single body. In this state they are sensitive to airborne chemicals and can detect food sources. They can readily change the shape and function of parts, and may form stalks that produce fruiting bodies, releasing countless spores, light enough to be carried on the wind or hitch a ride on passing animals. Slime molds are like a spreaded web and have movement like amoeba. Slime mold isn’t weird just because of its size. It also appears to be intelligent. It doesn’t have any brain or a nervous system but it can solve all kind of complex problems without any of that hardware. As slime mold grows, it can keep track of where it’s been. It can solve mazes in search of food. It can even be trained to take risks in the name of a big payoff.

Slime molds may be slimy, but they are not molds. Molds are fungi. A century ago, fungi, were defined by what they did not have, or did not do:

Today, organisms in the Kingdom Fungi are defined by:

What makes a creature charismatic?

In this new segment, we’ll feature one creature a month, and try to convince you that it’s worthy of the coveted Charismatic Creature title. By “creature” we mean almost anything—animals, viruses, subterranean fungal networks, you name it. And by “charismatic,” we don’t just mean cute, clever, or even all that nice! We just mean they have that special something that makes us want to lean in and learn everything about them—because they can’t all be baby pandas.

Slime molds are among the world’s strangest organisms. Long mistaken for fungi, they are now classed as a type of amoeba. As single-celled organisms, they have neither neurons nor brains. Yet for about a decade, scientists have debated whether slime molds have the capacity to learn about their environments and adjust their behavior accordingly.

Over the past two months, we’ve received dozens of listener suggestions—everything from turtles to tardigrades. We had to choose just one, and we’re starting simple—single celled simple. Our first charismatic creature is Physarum polycephalum, the “multi-headed” slime mold.

Despite having no brain or neurons and being just one giant goopy cell, these slime molds keep defying our expectations. They can solve mazes, recreate the Tokyo railway network,  learn, and even anticipate events. They can make rational and irretional choices that mirror our own. Not to mention they’re visually stunning too.

Chris Reid and his colleague Simon Garnier, who heads the Swarm Lab at the New Jersey Institute of Technology, are working on the mechanism behind how a slime mold transfers information between all of its parts to act as a kind of collective that mimics the capabilities of a brain full of neurons. Each tiny part of the slime mold contracts and expands over the course of about one minute, but the contraction rate is linked to the quality of the local environment. Attractive stimuli cause faster pulsations, while negative stimuli cause the pulsations to slow. Each pulsing part also influences the pulsing frequency of its neighbors, not unlike the way the firing rates of linked neurons influence one another. Using computer vision techniques and experiments that might be likened to a slime mold version of an MRI brain scan, the researchers are examining how the slime mold uses this mechanism to transfer information around its giant unicellular body and make complex decisions between conflicting stimuli.

Thus, Slime Molds are an amazing creation among various creature of this earth. Hope that we gonna make the best use of this tiny intelligent creature. But do you know one thing, slime molds taste like leaking the floor full of dirt! Haha……

This article was really interesting. Adding a video made the article way more eye-catching. Keep up the good work.