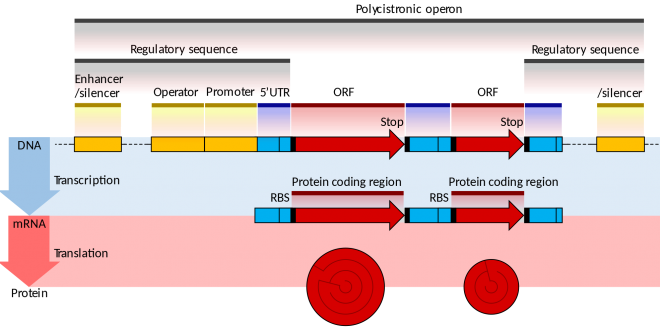 Regulation of Gene Expression in Prokaryotes: General features and Significance

Every cell of an organism possesses all the structural genes or cistrons. The genes produce proteins and control the activities of the organism. But a genetic system doesn’t allow them to function all at a time in order to avoid enzymatic chaos. Many gene products are only needed occasionally by the cell. This genes produce proteins when they are needed by the cell or the substrate on which they act is present. In eukaryotes, only a few genes are functional and all other genes are permanently nonfunctional. On the other hand prokaryotes such as E. coli (Escherichia coli) bacterium expresses only some of its genes at any given time out of the total of about three thousand genes.

Regulation of Gene Expression in Prokaryotes

Prokaryotic organisms lack a well developed nucleus and they are usually single celled. As DNA floats freely within cytoplasm of the cell, the processes of transcription and translation occur almost simultaneously. Transcription stops when there is no need of producing more proteins. The regulatory system of transcription controls the protein production and how much of each protein is expressed in the cell. If more protein production is needed, more transcription will occur. Thus, the regulation of gene expression works in prokaryotic cells. This gene regulation model was developed by Jacob and Monod.

Significance of Gene Regulation in Prokaryotes

Previous Sphagnum: A Useful Peat
Next Transcription: The Mechanism of pre-mRNA Synthesis