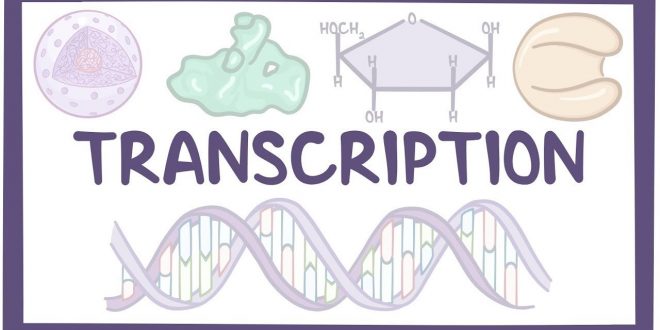 Transcription: The Mechanism of pre-mRNA Synthesis

Transcription is the synthesis of RNA molecule using one of the DNA strands as a template. It is the first step in the transfer of genetic information from genotype to phenotype. However, this process of transcription is a highly selective one i.e definite genes are transcribed only when their products are needed.

Requirements
Transcription usually requires three major components for a successful operation. They are:

The template of RNA synthesis is a single strand of a double helix DNA that has the definite gene that needs to be transcribed. The DNA strand used for replication is called Template strand and the other one non transcribed is the non-template strand.

The stretch of a DNA molecule that codes for an RNA or has the sequence for a protein is called a Transcriptional unit. This unit has three critical regions. Such as:

RNA is synthesized from ribonucleotide tri-phosphates (rNTPs). During synthesis, nucleotides are added one at a time in the 3′ OH end of the growing RNA chain. Two phosphates are cleaved from the triphosphate in this process and the remaining phosphate makes a phosphodiester bond that connects the nucleotide to the chain.

Two broad senses of sequences are important for the initiation of transcription-promoter and enhancer.

Promoter: First the RNA polymerase binds to the DNA to start the initiation of chain growth. The polymerase doesn’t bind randomly but at a specific base sequence known as promoter (from where synthesis begins). The promoter is about 20 to 200 bases in length.

Enhancer: Enhancer needs not be adjacent to the gene. They can enhance the transcription of a gene which is thousands of nucleotides away.

After the initial binding, the RNA polymerase starts the unwinding of the double helix causing the expected DNA strand to be separated from its partner. Then the enzyme starts its synthesis on the template strand. The chain growth always occurs in 5′ to 3′ direction.

RNA polymerase moves along the template strand and continuously adds nucleotides to the growing chain.

1. Self terminating (most common case): Termination occurs because of a definite base sequence of the DNA strand. This causes the transcribed strand (?) to form a hairpin loop by folding back upon itself and the synthesis is arrested.

2. Requires the presence of termination protein.

The Product thus produced in mRNA.

Currently in 4th year (Hons) in the Department of Botany, University of Dhaka. Planned to have multiple careers one by one but promised to be with 'Plantlet' as long as it's primary stage remains unfinished. Email: abulaisshomrat@gmail.com. Minimum monthly resolution - Publish (1), Revise (3), Share (5)
Previous Regulation of Gene Expression in Prokaryotes: General features and Significance
Next Anthoceros: The Hornworts