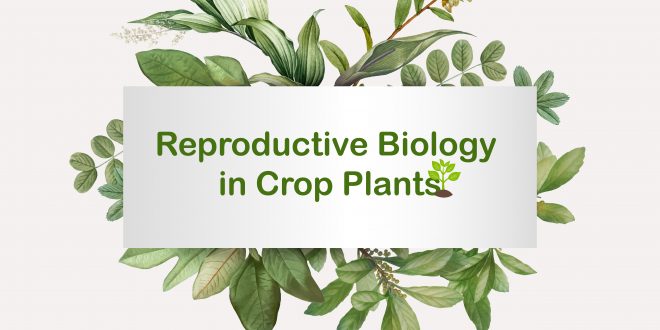 Modes of reproduction in crop plants are mainly divided into two categories:

What is Sexual Reproduction?

Sexual reproduction is a type of reproduction process that involves fertilization, i.e., the fusion of male and female gametes to form a zygote which develops into an embryo.

The flower is the specialized reproductive structure of plants. A flower usually consists of sepals, petals (or their modifications), stamens and/or pistils. Stamen is the male and pistil is the female reproductive part of a flower.

Depending upon the presence of stamen and pistil flowers can be of two types:

Microsporogenesis: The process of forming microspores or pollen grains is known as microsporogenesis. Microspores are produced in the anther. Each anther has four pollen sacs which contain numerous pollen mother cells (PMC’s). Each PMC undergoes meiosis and produce four haploid cells or microspores. The microspores mature into pollen grain by thickening of their walls.

Microgametogenesis: The process of forming male gametes or sperms is known as microgametogenesis. Male gametes are produced in microspores. During the maturation of pollen, the microspore nucleus divides mitotically to produce a generative nucleus and a vegetative or tube nucleus. The pollen is released in this binucleate stage. After pollination, pollen germinates through the style. The generative nucleus now undergoes mitosis and produce two male gametes or sperms. The pollen along with the pollen tube is known as microgametophyte.

Megagametogenesis:  The process of forming female gametes is known as megagametogenesis. Female gametes are produced in megaspores. The nucleus of a functional megaspore divides mitotically to produce four or more nuclei. In most crop plants, the megaspore nucleus undergoes three mitotic divisions and produces eight nuclei. Three of these nuclei move to one pole and produce a central egg cell and two synergid cells. Another three nuclei move to another pole and produce antipodal cells. The rest of the two nuclei remains in the centre, known as the polar nucleus. The two polar nuclei eventually fuse and form the secondary nucleus. The megaspore thus develops into a mature megagametophyte or embryo sac. The embryo sac generally contains one egg cell, two synergids, three antipodal cells; all are haploid except the secondary nucleus (polar nucleus) which is diploid.

The process of fusion of male and female gametes is known as fertilization. After pollination, fertilization occurs. In crop plants, there are two sperm cells per pollen tube. Of the two sperm cells, one sperm fertilizes the egg cell, forming a diploid zygote. The other sperm fuses with the two polar nuclei, forming a triploid cell that develops into the endosperm. Together, these two fertilization events in crop plants are known as double fertilization. The fertilized ovule forms the seed, whereas the tissues of the ovary become the fruit, usually enveloping the seed.

I, Shraboni Mostofa, am currently studying B.S. Honours (2nd year) in Department of Botany, University of Dhaka. I have the interest to work in the biological research field as a scientist. I want to contribute to the world something that really matters. I am always trying to improve myself as a good creation of the Great Creator. Email: shrabonimostofa@gmail.com. Minimum monthly resolution: Publish (1), Revise (1), Share (1).
Previous Reproductive Biology in Crop Plants: Part One
Next Gene Cloning: Basic, Requirements & Steps