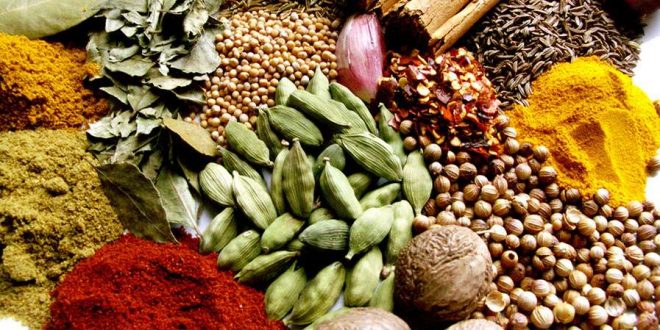 The term ‘Spice’ refers to any dried part of a plant, used for seasoning and flavoring a dish, but not used as the main ingredient. Parts of a plant including dried bark, roots, berries, seeds, twigs, or anything else that is not the green leafy part, is known as a spice.

Spices bring good flavor and aroma to the food also greatly increase the pleasure of eating.

They stimulate the appetite and increases the flow of gastric juice in our stomach. That is why, they are often referred as ‘Food Accessories’ or ‘Food Adjuncts’.

Spices cannot be grouped as foods because they contain less nutritive.

A condiment is a spice, sauce, or preparation that is added to food, typically after cooking, to impart a specific flavor, to enhance the flavor, or to complement the dish and is usually added after the food has been cooked prior to serving.

Spices and condiments have played a prominent part in all the civilization of antiquity in ancient China, India, Babylon, Egypt, Greece and Rome.

The majority of spices originated in the Asiatic tropics and were among the first objects of commerce between the East and West.

The first traders were Arabs, who brought the products of Southern India and the Spices Islands by Caravan to Arabia and thence to Europe.

There are few types of spices according to their orgin-

The very common savoury seeds that are commercially used as spices are:

Currently I am a student of B.S. Honors in Department of Botany, University of Dhaka. My first goal is to become a good human being and second one is to help those in need by any honest means. The rest is on Allah.
@asfiraian@gmail.com
Previous Deuteromycetes: The Fungi Imperfecti
Next Secretory Tissue: A Laticiferous Discussion

Many systems of classification of Gymnosperms have been proposed by different authors. According to the …