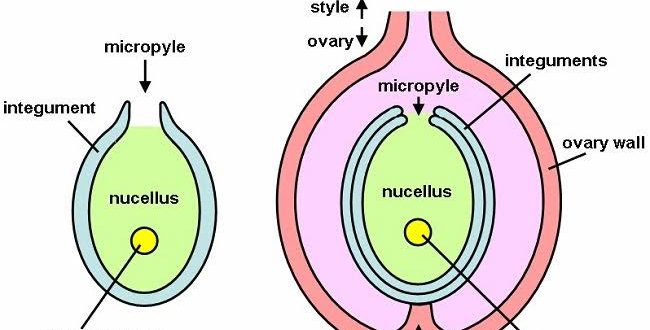 The Megasporangium: Types, Parts and Functions

Megasporangium is the structure of a plant body which contains female reproductive organ . It can be called ovule .  It consists of nucellus and integument . The ovule can be formed in different size and shape . Many times it changes its form during the course of its development.

Mature megasporangium can be classified under 5 types .

Orthotropous – The micropyle lies directly in line with the hilum.   Example -Polygonaceae,  Piperaceae

Anatropous– The ovule becomes completely Inverted so that the micropyle and hilum  lie close to each other . Example – all members of Sympetale and several family in monocot and dicot.

Amphitropous- When the curvature of ovule is more pronounced , it affects the embryo  sac , it bents like a horse – shoe.  Example- Alismaceae, Butomaceae.

Hemianatropous- When the integument and nucellus lie at right angle, example- Ranunculus, Tulbaghia.

A very peculiar type ovule is seen in some members in Plumbaginaceae, here the curvature does not stop rather continue until the ovule turn completely .  This type is called  Circinotropous.  Example- Opuntia. 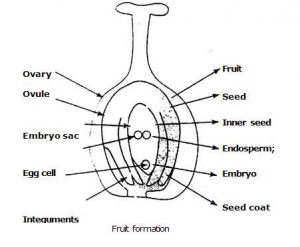 Integument – Nucellus is surrounded by a cover,  except in the micropilar region is called integumen .  Generally the ovule has one or two integument . Most genera in monocot have two integument.

There is a evidence that in some genera by a fusion of two separate primordia,  a single integument has originated.

Sometimes remain as a thin layer

Micropyle- It may be formed either by the inner integument, in Centrospermales or by both inner and outer integument , in Pontederiaceae where there is two integuments are present.

When both integument take part in formation , a passage is formed  by the outer integument, as a result the micropylar canal has a zigzag outline, example- Melastomaceae . In  Ficus, the integumentary cells come in contact with each other so that the canal of micropyle is extremely narrow and imperceptible.

Nucellus- Depending on the development of the nucellus , the ovules can be two type-

Crassinucellate – A well developed parietal tissue is present and the microspore mother cell  is separated from the nucellar epidermis by one or several layer . The nucellus may enlarge by an increasing number of parietal cell or by periclinal division, example-  Zizyphus . Several members in Salicaceae, Polygonaceae  has a beak- shaped nucellus reaching out the micropyle.

When the embroyo sac matures, the cell of nucellus becomes used up. 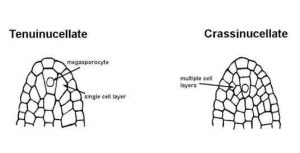 There is another type of ovule can  be found –

Pseudo – crassinucellate – No partial cell is present . The epidermis is divided and form many layer of cell. Example –   Nigella damascena

Integument tapetum- Where  the nucellus is disorganized, the embryo sac comes in contact with the inner layer of seed coat, they show a pronounced radial elongation and sometimes binucleate . Having the similarities  with the anther tapetum, this layer is known as integument tapetum or endothelium . It is a nutritive layer whose main function is to serve as an medium of transportation of food materials from integument to embryo sac . In later stages, at the time of embryo’s maturity, the inner surface of endothelium  become cutinized  and becomes a protective layer.

Hypostase- At the level of origin of two integuments and directly below the embryo sac , a well- defined but irregularly outlinend group of nucellar cells with poorly cytoplasmic contents  but have partially lignified walls composed of a highly refractive material.

Archesporium- It has a hypodermal origin. Cells which lay directlly below the epidermis become more conspicous , large in size and have prominent nucleus, they are called archesporial cell . The archesporial cell may divide to form primary parietal and sporogenous cell or may function as megaspore mother cell .

So these are the parts of megasporangium or ovule .  Later , the ovule undergoes meiosis cell divison to produce spores which are haploid through megasporogenesis.

The megaspore mother cell is dipolid ( 2n ) and forms haploid megaspores . The 1st divison is transverse  and two cells are formed . Both the cells again transversely divides and four cells are formed which are haploid . This spores are arranged in a row which is axial and called linear tetrad . Only of megaspore out of all of them remain at chalazal end and works as functional megaspore and other cells are gradually degenerate .

Previous Coliform Bacteria: An Indicator of Water Contamination
Next Nucleosome Model of Chromosomes