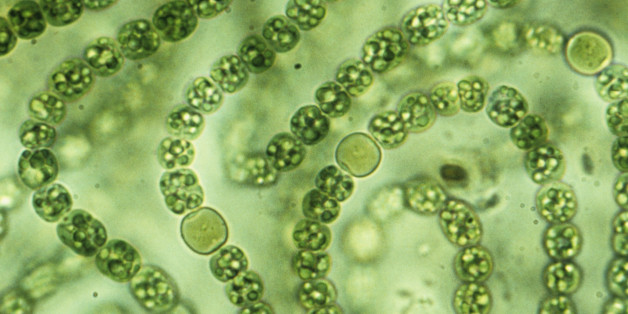 Blue-Green Algae: A Brief Introduction to the Prokaryotic Photosynthesizers

The class Myxophyceae or Cyanophyceae is commonly called Blue-Green algae because of the presence of a principal bluish-green pigment (c-phycocyanin) along with green chlorophyll-a, yellowish carotenoids, and some quantity of Myxoxanthin. The combination of the abundant blue and green pigments as mentioned above give these organisms a bluish-green appearance which is the reason behind its popular name mentioned in the headline. Though in modern classification the name algae only incorporates eukaryotic organisms, the algologists still have them under their studies because of their capability of photosynthesis in thylakoids and green color to some extent.

However, the bacteriologists consider them as bacteria and formed a group having them known as ‘Cyanobacteria’.

The BGA can be found in a wide variety of places around the whole world as they are cosmopoliton in nature. Starting from moist to liquid water conditions to snow covered water, they are available in freshwater, marine aquatic bodies, lakes, streams, estuaries and even inside soil. They are found in xeric environments under the rocks and can be seen in symbiotic associations with different plants and plant parts and also in the lichen forming organisms. Moreover, there have been various reports which confirmed the existence of some members of BGA in inhospitable environments like hot water springs. It is to be noted that these minute organisms are abundant in phosphorous and nitrogen enriched conditions.

The BGA are buoyant in nature. So, they float on water surface and as they multiply very quickly, they form a mat like layer in water body known as ‘BGA bloom’.

Note that, the BGA do not grow in the absence of light as they require light for photolysis to occur in food production. So, they are obligate photoautotrophs.

The Cyanobacteria is a heterogenous group. So, they range from unicellular to filamentous state. Even they may form colonies like bacteria and other algae. In filamentous form, the body of a BGA may show various structures such as:

Blue-green algae are well known for their ability to fix nitrogen in the atmosphere. This is possible as they have specialized cells called heterocysts in their filamentous body. However, it should be remembered that not every cyanobacterium can fix this most abundant gas. Prescott (1969) has reported about 20 species which have this power whereas Desikachary (1959) reported 22.

The fixation of Nitrogen means to convert the available atmospheric Nitrogen into compound forms which can be used directly by the plants. Interestingly, the heterocysts are designed in such a way that they have thick wall that prevents the Oxygen entering the cell and thus creates an efficient environment for Nitrogen fixing enzymes.

Currently in 4th year (Hons) in the Department of Botany, University of Dhaka. Planned to have multiple careers one by one but promised to be with 'Plantlet' as long as it's primary stage remains unfinished. Email: abulaisshomrat@gmail.com. Minimum monthly resolution - Publish (1), Revise (3), Share (5)
Previous Self Incompatibility: An intelligent journey to variation
Next Biochemical Composition of Some Selected Aquatic Macrophytes Under Ex-situ Conditions