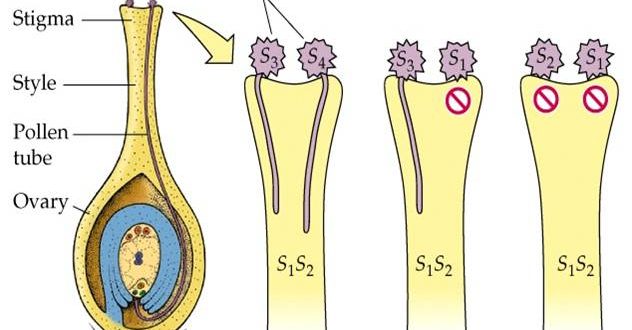 Self Incompatibility: An intelligent journey to variation

Self-incompatibility is the inability of a pollen to fertilize the stigma of a same flower or the other flower of the same plant. It is a general name for several genetic mechanisms in angiosperms, which prevent self-fertilization and encourage outcrossing.

Types of self- incompatibility

Lewis (1954) has suggested various classifications of self-incompatibility. According to him, SI is mainly 2 types:

In this system, flowers are different in morphology. That means the anthers and stigmas are found at different levels within the flower.

It does not have much importance in crop improvement.

This incompatibility is of two types:

Both stamens and styles are of two different heights. It is two types:

The flower with short style and high stamen is called as thrum type.

The flower with long style and short stamen is called as pin flower. 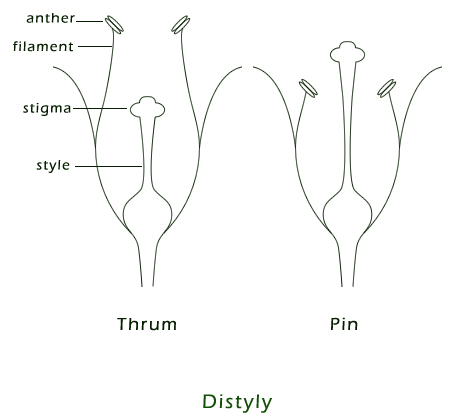 It is the condition in which three different style lengths and corresponding stamen lengths are found in the same species. The flowers are short styled, intermediate styled, and long styled.

This is governed by genotype of pollen or simply haploid genotype. It occurs due to the interaction between the pollen tube and style which is determined by the single S allele in the haploid pollen grain.

Sure to help forward:

The pollen tube growth will be arrested if and only if for a haploid pollen, the stigma contains the same allele of that pollen. The stigma will also contain another allele. But that isn’t a concern here.

So, summarily speaking, the haploid genotype (allele) of pollen will search if any allele in the stigma is same as its own. If they are same, no pollen tube forms from that pollen.

Let’s understand by an example:

Let the genotype of pollen mother plant is S1S2. 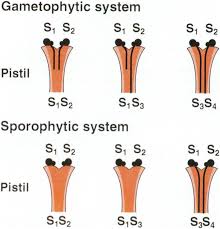 1st case: Both pollens S1 and S2 are inhibited in an S1S2 style (follow the figure).

2nd case: S2 pollen will grow successfully through the S1S3 style. But S1 will not.

3rd case: Pollen grains from an S1S2 plant on an S3S4 pistil, the pollen tubes of both genotypes grow through the style.

Two different mechanism of gametophytic self- incompatibility have been described in detail at the molecular level and their description follows:

According to this mechanism, the pollen tube elongation is halted when it has proceeded approximately one third of the way through the style.

The female component ribonuclease, termed s-RNase probably causes degradation of ribosomal RNA inside the pollen tube , in the case of identical male and female s alleles, and consequently pollen tube elongation is arrested and the pollen grain dies.

According to this, S allele-specific proteins are produced by the stigma; most likely the S locus encodes for more than one protein product.

In Brassica campestris, S allele specific proteins seemed to be produced at the time of stigma maturation, and they were most likely glycoproteins.

But more recent studies suggest that the glycoproteins are produced during pistil development and their levels increase gradually.

This seems to be the case both in the sporophytic (Brassica) and gametophytic (Nicotiana alata) systems.

In the gametophytic system, glycoproteins appear to be confined to the style and stigma, i.e., the path taken by the pollen tube.

Outcome of the interaction between the pollen tube and the style is determined by the genotype of the sporophyte (diploid plant body). (That is, both alleles of the stigma function together.)

Understand this: Any pollen from an S1S2 plant can not fertilize an S1_ or S2_ plant.

Let’s understand by an example:

1st case: S1 and S2 pollen germination is arrested at the stigma surface with allele S1S2.

2nd case: S1 and S2 pollen germination is arrested at the stigma surface with allele S1S3.

3rd case: Where there is no match (S3S4), the pollen may germinate and grow through the style to the embryo sac.

So if for a single pollen, any of the stigma allele matches with that of the pollen, it will not give permission to germinate any pollen tube from that pollen and others also. Follow the  figure below, to justify your understanding. 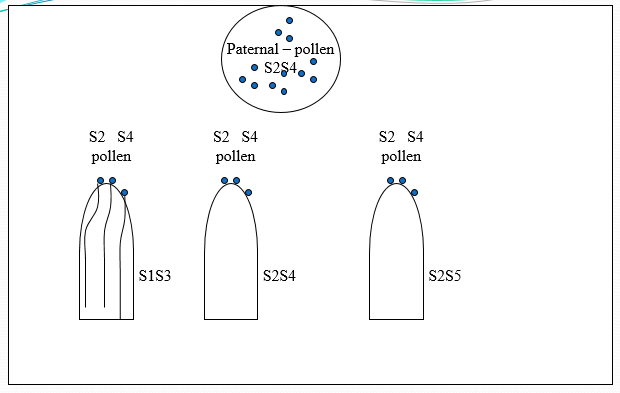 Reasons of self incompatibility

Researchers are unraveling the molecular mechanisms that are involved in SI.

Herkogamy: It is the spatial separation of male and female reproductive organs within hermaphrodite flowers. E.g. in Calotropis.

Dichogamy: Anthers and stigma of a bisexual flowers mature at different times. 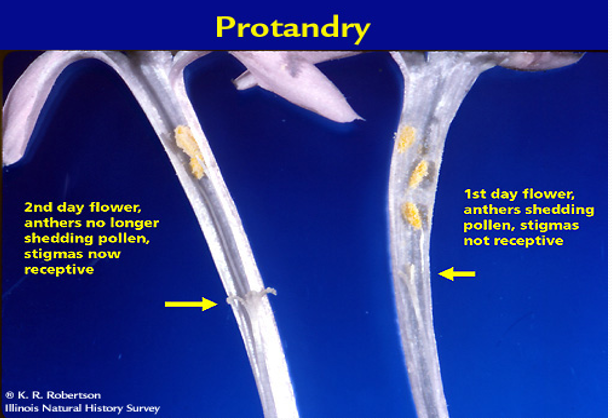 Heterostyly: Styles and filaments are of different lengths resulting in cross pollination, e.g. in Linseed (studied above).

How to overcome self-incompatibility

There are many methods to overcome self incompatibility-

Bud pollination: It is the most successful method to overcome self incompatibility.

Surgical method: Removal of stigmatic surface /whole or part of the stigma or style to remove self incompatibility.

High temperature: Around 60 degree Celcius temperature is needed to remove self incompatibility.

In Vitro pollination: This method is caused by removing the stigmatic ,stylar and ovary wall tissues are directly dusted with pollen grains and then cultured in a suitable nutrient medium that supported both the germination of pollen and the development of fertilized ovules.

Grafting: Grafting of a branch onto another branch of the same plant or of another plant is reported to reduce the degree of self incompatibility in Trifolium pratense.

Importance of self incompatibility

2. It is necessary to cross-compatible varieties to ensure fruitfulness.

3. It effectively prevents self pollination, as a result a profound effect on plant breeding approaches.

5. Continued selfing leads to a depression in self incompatibility.

Limitations of self incompatibility

Self-incompatibility has some limitations to use.

3. If the self incompatibility lines are difficult to maintain, hybrid seeds would be expensive.

This is an official account of this website. This ID holds articles from two categories. 1. Articles from our non-authors. 2. Articles of the authors whose IDs were deleted.
Previous Introduction to Male Sterility
Next Blue-Green Algae: A Brief Introduction to the Prokaryotic Photosynthesizers