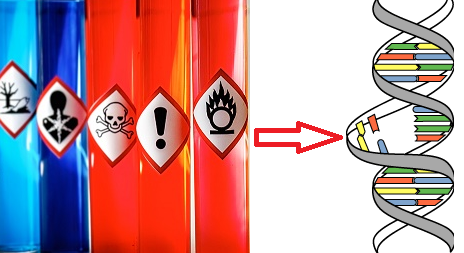 Mutation breeding or mutagenesis is one of many great inventions of the 20th century. Until 1927, people thought mutation only occurred naturally. But to their surprise, they discovered that humans could even induce mutation artificially. And now in the age of biotechnology almost every plant science lab uses recombinant DNA technology or mutagenic agents(for mutation breeding) to induce beneficiary traits in a plant and create new species.

Anything that causes mutation is a mutagen. By definition, a mutagen is a physical or chemical agent that permanently changes genetic material. Mutagenic agents such as electric currents, atomic particles, rays, temperature variation, etc., work in spontaneous mutation. On the other hand, artificial mutation uses mutagens like gamma rays, x-rays, neutrons, ultraviolet rays, chemicals, etc.

The different mutagens employed for artificial induction of mutations are:

Radiations are of two types- ionizing and non-ionizing radiation.

Alpha rays are radioactive rays with a positive charge. They are made up of two protons and two neutrons. They are emitted chiefly by the isotopes of a heavier element. When passing through a matter, they create strong ionization. They have very little penetrating power in living tissue. Being positively charged, they are easily slowed down by negative charges in the matter. Alpha rays usually cause chromosomal aberrations.

Beta rays are also radioactive rays with a negative charge. They are high-speed electrons emitted from the nucleus of an unstable atom. They have very little ionizing power but greater penetrating power than alpha rays. Being negatively charged, they are slowed down by positive charges and lose energy readily. Thus, they are not very penetrating. They cause both chromosomal aberration and gene mutation. P32 and S35 are the sources of these rays.

X-rays are electromagnetic radiations having a wavelength much shorter than those from visible light. They come in a variety of intensities. X-rays transfer their energy to the atom of tissue through which they pass, which causes ionization and excitation of atoms and molecules of the tissue, consequently giving rise to chromosomal and gene mutations. X-ray treatment is done by X-ray machines installed in rooms.

Gamma rays are electromagnetic radiations similar to x-rays in their physical characteristics and actions on the organisms. They are, therefore, natural x-rays but of a very short wavelength. That is why they are more penetrating. Gamma rays are similar to light but have a shorter wavelength, therefore, contain high energy. Most of the gamma rays have a wavelength less than 0.01Å. Treatment of plants with gamma radiation produces gene mutations. Exposure to gamma radiation is usually done in gamma gardens.

They are electrically neutral particles, and their biological effects are due to the densely ionizing protons, which may be fast or slow. The neutrons may be highly penetrating because they lack any electric charge. No matter charged particles slow them down, they tend to move in a straight line until they collide. The source of neutrons is nuclear reactors.

Ultraviolet rays are non-ionizing with wavelengths between 1000 to 4000Å. Because of very long wavelengths, they do not penetrate the tissue. Thus their biological effects are only due to the excitation of planetary electrons, which results in increased chemical reactivity under the tissue. Thus, their biological effects are only due to excitation and photochemical reactions. Because of significantly less penetrating power, ultraviolet rays are inefficient in producing chromosomal and gene mutations as ionizing radiations. So their usage is limited to pollen grain research. UV radiations have not yet developed economically valuable mutants in higher plants. Mercury vapor lamps and tubes specially designed for UV rays produce the necessary UV radiation. Treatment is carried out by exposing the desired plant material to them. UV radiation treatment is relatively expensive.

The most powerful mutagenic chemical discovered so far is the mustard gas and related compound such as ethylene oxide, 8-ethoxy caffeine, etc. They are applied to desired plant material in solutions and induce both chromosomal and gene mutations. Different classes of chemical mutagens are:

Ion beam irradiation has recently been shown as an effective means of generating mutations. The biological impacts of ion beams have a high relative biological effectiveness in mortality, mutation, and other areas when compared to low linear energy transfer radiation like gamma rays, x-rays, and electrons. Because ion beams deposit tremendous energy on a local target, it primarily produces mostly single or double-strand DNA breaks with damaged end groups that are difficult to repair. As a result, rather than point mutation, it appears feasible that ion beams usually cause substantial DNA modifications such as inversions, translocations, and massive deletions. It has also been proven that ion beams cause frequent mutations. Using this technique BINA(Bangladesh Institute of Nuclear Agriculture) already developed some mutant lines.

Irradiation breeding is the process of generating mutations in plants and seeds using ionizing radiations. X-rays and gamma rays are most commonly used to induce mutations in crops. Because they usually produce gene mutations. In contrast, the other radiations mainly induce chromosomal mutations, disturbing the characters’ whole setup in organisms. To treat plant material, x-ray machines must be installed in well-protected rooms. Determining the number of plants to be treated with x-rays is therefore difficult. However, gamma-ray irradiation is carried out in an open garden, constructed specifically for it. Which imposes no such difficulty, and therefore, its use is comparatively more common than x-rays for irradiation of mutations.

I'm a student of department of botany at University of Dhaka. I'm learning a lot of new interesting things about different spheres of botany and I'll keep updating about them to keep your knowledge of nature enriched. Email: tarannum28@gmail.com Minimum monthly resolution: Publish(3), Revise(2), Share(5)
Previous Archaea: Definition, Characteristics, Classification and Importance
Next River Ecosystem in Bangladesh: Bangshai River (Part 2)

Loved it a lot.