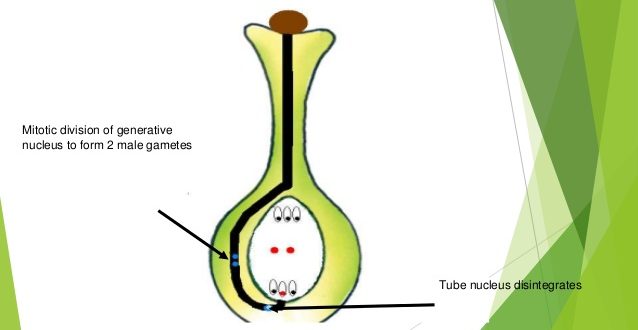 Among early students of the development of pollen, Hofmeister (1848) presented some surprisingly good illustrations of the process of tetrad formation (microspore tetrad), and Reichenbach, Hartig and several other workers noted the presence of two nuclei in whole mounts of the mature pollen grains of several angiosperms.

Discovery of nature of pollen nuclei

Strasburger (1877) and his pupil Elfving (1879) extended the observations of Hofmeister, Reichenbach & other scientists to cover several families and demonstrated the widespread occurrence of the binucleate condition in pollen grains.

They further found that one of these nuclei originally lies in a small cell cut off at the periphery of the pollen grain but later becomes free by a dissolution of the partition wall. Elfving also tried to germinate pollen grains in artificial media, and when this was unsuccessful, he made preparations of pollen tubes from dissected styles. Here he was able to find the three nuclei which we now know to be the two male gametes and the tube or vegetative nucleus.

Unfortunately both Strasburger and Elfving made the mistake of interpreting the smaller cell in the pollen grain as vegetative or prothallial and the larger as generative. They further thought that all the nuclei in the pollen tube dissolved and disappeared before fertilization.


These mistakes were, however, rectified by Strasburger in a subsequent paper (1884).

For our knowledge of the organization of the embryo sac we are indebted in the first instance to the works of Hofmeister (1847-1861). Working wholly with cleared preparations and freehand sections, he succeeded in identifying the two groups of cells at the opposite poles of the embryo sac. Those lying at the micropylar end were designated as the “germinal” or “embryonal” vesicles, all capable of giving rise to embryos and therefore to be regarded as homologous with the corpuscula (archegonia) of the gymnosperms. The cells at the chalazal end were considered to be prothallial, and the embryo sac itself was interpreted as homologous with the megaspore or female gametophyte of the heterosporous pteridophytes and the gymnosperms.

Although Hofmeister’s work was important, he failed to distinguish clearly between the synergids and the egg and regarded all three of them as having the same function. Further, he was unable to trace the mode of origin of the embryo sac, the general opinion in those days being that it arose by the simple enlargement of a cell of the nucellus.

Further knowledge of the development and organization of the embryo sac became available as the result of a concentrated attack on the problem made by several botanists during the years 1877 to 1881. To be named specially in this connection are Warming, Vesque, Strasburger, Fischer, Ward, Jonsson, Treub and Mellink, and Guignard.

Strasburger (1879) demonstrated that at first one of the nucellar cells becomes differentiated as the megaspore mother cell and goes through two divisions to give rise to a row of four cells. Of these, the three micropylar cells soon degenerate and the chalazal alone enlarges and functions. The nucleus of this cell (the functioning megaspore) divides thrice to give rise to two groups of four nuclei, one at the micropylar end and the other at the chalazal end of the cell.

From the former arise the egg apparatus (consisting of an egg cell and two synergids) and the upper polar nucleus; from the latter, the three antipodal cells and the lower polar nucleus. The polar nuclei were observed to fuse in the center to form a secondary nucleus, which gave rise to the endosperm. The synergids were regarded as modified structures assisting in the process of fertilization.

The most important of all was Strasburger’s (1884) discovery of the actual process of syngamy, or the fusion of the male and female gametes. In a memorable paper, entitled “Neue Untersuchungen uber den Befruchtungsvorgang bei den Phanerogamen,” he corrected some of the mistakes he had made in 1877 on the organization of the male gametophyte.

On the basis of his studies on the embryo sac of Monotropa and some other plants, Strasburger further showed that the pollen tube discharges its nuclei into the sac (previous to this it was believed that fertilization occurred merely by the diffusion of the cell sap from the tube) and that one of the two male nuclei fuses with the nucleus of the egg, thus providing actual proof of the nature of fertilization and its importance in the life cycle of a plant.

In the concluding part of his memoir, Strasburger made the following generalizations, which are now almost axiomatic with us:

Source: An Introduction to the Embryology of Angiosperm by P. Maheshwari.

Currently in 4th year (Hons) in the Department of Botany, University of Dhaka. Planned to have multiple careers one by one but promised to be with 'Plantlet' as long as it's primary stage remains unfinished. Email: abulaisshomrat@gmail.com. Minimum monthly resolution - Publish (1), Revise (3), Share (5)
Previous Pollen Tube Discovery by G. B. Amici
Next Nemec Phenomenon: Embryo Sac Like Pollen Grain